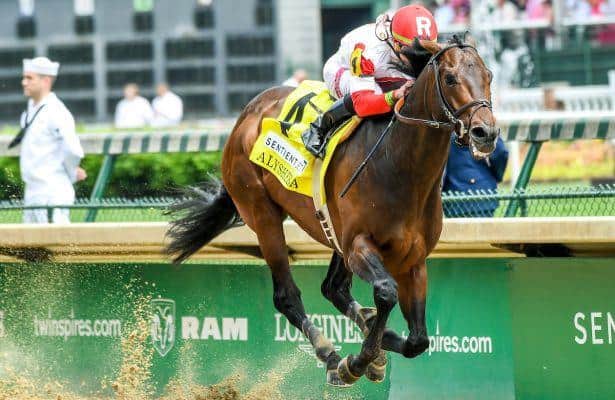 With Justify our newly minted Triple Crown winner, it's time for racing's second season to begin. A "Downs After Dark" card including five graded stakes on Saturday at Churchill Downs means we're doing so in earnest.

Here's a rundown of all the races to know, with post times in Eastern Standard.

Once upon a time Chocolate Martini ran for a tag, but after being picked up by Double Doors Racing and transferred to Thomas Amoss’ barn, the filly blossomed. She won an optional claiming race en route to upsetting the Fair Grounds Oaks (G2) and then finished fifth in the Kentucky Oaks (G1). She now heads the Grade 2 Summertime Oaks at Santa Anita. The 1 1/16-mile race drew a field of six, including multiple graded stakes placed Thirteen Squared and undefeated Ollie’s Candy. Trained by William Morey, Ollie’s Candy has only raced on Golden Gate’s all weather surface and will be making her dirt debut, as well as her two-turn debut. If Chocolate Martini runs to recent form, she should win this, but the local starters are nothing to sneeze at. Post time is 6 p.m.

Ax Man, an impressive winner last out on the Preakness Stakes undercard, will meet former Triple Crown contenders in the Grade 3 Matt Winn Stakes. The lightly raced Bob Baffert trainee debuted on New Year’s Day and is 3-for-4 lifetime. He will break from post seven in a field of the same size. Among Ax Man's rivals are Tiz Mischief, who is 2: 0-2-0 at Churchill Downs, and Combatant, who broke his maiden under the Twin Spires. Navy Armed Guard and King Zachary are also veterans of the Triple Crown trail. Pat Day Mile (G3) winner Funny Duck will look to repeat at Churchill, but won't get to run in the slop this time.

Champion World Approval tops the Grade 2 Wise Dan Stakes. Carded for 1 1/16-mile on the turf, the race attracted a field of eight. Divisidero presents a good betting alternative to the 6-5 morning line favorite in terms of value. The Kelly Rubley trainee is undefeated in three starts at Churchill Downs and is a proficient 5: 2-1-2 at the Wise Dan Stakes distance. Hard-trying Shining Copper is always worth a look, as is Mr. Misunderstood.

The Grade 2 Fleur de Lis Handicap drew a salty field of nine, topped by tepid 3-1 favorite Farrell, who will break from the far outside post. Most of her foes are familiar ones, including grade two winner Blue Prize. Mopotism, who scratched out of the Beholder Mile (G1) two weeks ago, is in with a decent shot, as is most of the field. This will be a good betting race for the exactas, trifectas, and superfectas but will likely be one to go deep in for your vertical wagers. The winner earns a trip to the Breeders' Cup Distaff.

The Grade 3 Regret Stakes represents another good wagering opportunity. The nine-furlong turf affair drew a field of 13 with the morning line favorite Heavenly Love a juicy 5-1. The Grade 1 winner will break from the rail. None of the rest of the field is particularly accomplished. Good luck betting this one.

Up-and-coming Backyard Heaven, winner of the Alysheba (G2), is the one to beat in the Grade 1 Stephen Foster Handicap off that effort. He will carry 121 pounds, spotting the rest of the field as much as seven. Honorable Duty and fan-favorite Patch both enter off allowance victories and will be running second off the layoff. Irish War Cry won the Pimlico Special (G3) last out with a front-running effort, while Pavel was fourth in the Gold Cup (G1). In fact, Pavel would be a good one to play in the fourth spot in superfecta wagers as he has finished fourth in his last four starts. Post time is 9:39 p.m.

Tap Gun, a 3-year old half-sister to Gun Runner, will make her debut in Churchill Downs’s eighth race on Sunday. By Tapit, and out of the mare Quiet Giant, the gray/roan filly has been training well for Amoss but is the only one in the field who has never raced. The 1 1/16-mile race is for fillies and mares 3-years old and upward. Both Area and East Moon look good in this spot, with Area never running worse than fourth and East Moon posting the biggest Equibase number in the field. Post time is 4:22 p.m.

Multiple Grade 1 winner Oscar Performance makes his much-anticipated return to the races after being off since running ninth in the Breeders’ Cup Turf (G1) back in November. The one-mile, Grade 3 Poker Stakes will be well within his scope and is a perfect starting point for the 4-year old son of Kitten’s Joy. His biggest threats will likely be Ballagh Rocks and Fire Away. Ballagh Rocks is 3: 2-1-0 at Belmont Park and was most recently second in the Makers’ 46 Mile (G1). Meanwhile Fire Away has two wins this year and a solid third behind World Approval. Post time is 5:50 p.m.