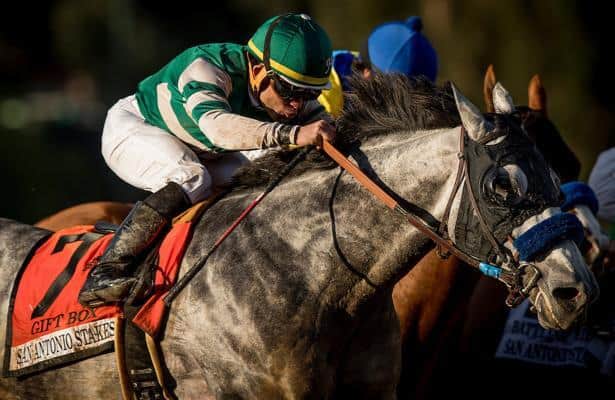 Each weekend, Horse Racing Nation previews the top races to tune into coast to coast and runs down the main contenders. All times are Eastern, with this a three-day special given a trio of Grade 1 races await Monday at Santa Anita Park.

Classic Girl, a half-sister to everyone’s favorite bad boy (and champion) Classic Empire, debuts for the familiar connections owner John Oxley and trainer Mark Casse. The Candy Ride filly’s first out will come at five furlongs on the turf against nine rivals. She will exit post six with Edgard Zayas aboard and is the 4-1 third choice on the morning line.

Clause will be hoping to catch a firm turf course in the Boiling Springs Stakes. Last out, the Speightstown filly, who drew post four, ran into soft turf in the Appalachian (G2) and faded from contention in the latter part of the race. Stablemate Beautiful Lover has won her last two races and appears to be coming along nicely for Chad Brown. Don’t be surprised if it’s all-Brown exacta.

New Jersey-bred Sunny Ridge goes favored in his home state in the Grade 3 Salvator Mile. He was last seen finishing third in the slop at Belmont in the Westchester (G3). His chief rival is Charles Town Classic (G2) runner-up Diamond King, who has shown solid form so far this year for trainer John Servis. California Night looked good winning a high-dollar optional claimer on May 2. A speedy type, he will challenge Diamond King for the lead from the outside post. Another worth considering, for the right price at least, is Bal Harbour. He made his season debut back in January but hasn’t raced since. I trust Todd Pletcher to have him sharp.

The Grade 3 Winning Colors Stakes is a wide-open affair. Recent allowance winner Awestruck is the tepid 3-1 morning line favorite in a full field sorely lacking any good current stakes form. While Awestruck has not been in top form lately, she does like the Churchill oval. Let It Ride Mom has performed well, but on Woodbine’s synthetic surface. Additionally, the 5-year old Into Mischief mare has not raced since November. Classy Act tailed off last fall and will be making her 2019 debut here. She has also changed barns and will be saddled by Joe Sharp for the first time. Her morning works have looked good, so maybe this is the time to catch a good price on her. Salt Bae and Honey Bunny both step up in class but have been in good form this year. Either could provide a nice payday with a win.

If you’re looking to make some money, the Grade 2 Monmouth Stakes is a good place to try. The 1 1/8-mile turf race drew a field of eight, and your guess is as good as mine on a winner. Almanaar broke through at this level in February of 2017 but has not run nearly as well since a runner-up finish in last year’s Arlington Million (G1). Synchrony is the morning line favorite but has not won a race since taking the Fair Grounds Handicap (G3) in February. Projected has as good a shot as anyone else despite September 30, 2017, being the last time he had his picture taken. Personally, I like 8-1 shot Markitoff. He ran into superstar Bricks and Mortar in his last two and takes a step down in class. He will be up on the lead and could take them all the way.

Undefeated Grade 1 winner Fog of War gets back to work in the seven-furlong Paradise Creek Stakes for 3-year olds on the turf. The regally bred colt has not raced since overcoming trouble and winning the Summer (G1) at Woodbine back in September, and against the eventual Preakness Stakes winner War of Will at that. Seven others will line up to face him, including Grade 1-placed Mucho, who will be making his turf debut for Bill Mott.

It’s a bit mind-blowing, but the two favorites in the Grade 3 Daytona Stakes are both exiting state-bred company. Heavy favorite Eddie Haskell has never been off the board going five furlongs and was last seen finishing a close second in the Sensational Star Stakes. Second choice Brandothebartender has strung together a pair of places in state-bred company leading into this spot. Surprisingly, Kanthaka is being let go at 4-1 on the morning line despite racing exclusively in open company. This is another going for the first time on grass.

Marckie’s Water, most recently first in a 1 1/8-mile optional claimer on the turf, tops the Grade 2 Charles Whittingham Stakes for 3-year-olds and up going 1 ¼-miles on the turf, beginning on the hillside. The 5-year old son of Tribal Rule topped fellow entrants Tizzarunner and Ashleyluvssugar in that event. Ashleyluvssugar is my top selection here, as I think the 8-year old gelding is best going 10 to 12 furlongs. Prime Attraction drops in from a Grade 1 and could certainly be dangerous here on the step down in class. However, the 6-year old son of Unbridled’s Song does not seem to particularly like the distance.

Grade 2 winner American Anthem tops the Grade 2 Triple Bend Stakes. The 5-year old son of Bodemeister is 5: 2-1-1- at Santa Anita and 5: 4-0-1 at the Triple Bend distance of seven furlongs. I like the cutback in distance from his seasonal debut going a mile, when he was just nabbed by ¾ of a length in the end. Despite a couple layoffs, second choice The Hardest Way has returned in good form each time, including a romping win last month off a nearly 13-month layoff. Cistron looks dangerous off a huge win in the Kona Gold (G2) in his return to dirt. He took the field gate to wire in that event. Nero seems sharp, especially on the cutback in distance; however, I think this is American Anthem’s to lose.

As has become the norm in Southern California, the Grade 2 Summertime Oaks drew a short field of five. Jerry Hollendorfer will saddle favorite Sneaking Out, but the filly is no secret as she has won her last four starts. There really is no clear favorite or longshot with this also the return spot for Flor de La Mar from the Kentucky Oaks. The morning line odds only span 2-1 to 4-1.

Last year’s Grade 2 Monrovia Stakes winner Belvoir Bay is back to defend her title off a runner-up effort in the Al Quoz Sprint (G1) in Dubai. Trained by Peter Miller, she has been installed as the heavy favorite for the five-furlong turf event. Stablemate Painting Corners took the Mizdirection field coast to coast in her last outing and will likely go with Belvoir Bay out for the lead. S Y Sky has never been out of the trifecta in 12 career starts and will be looking for the lead along with the Miller pair already mentioned. This would mark Painting Corners and S Y Sky’s first graded victory should either of them win.

The Grade 1 Gamely Stakes is a mouthwatering matchup with Chad Brown shipping in Rymska, who drew the rail and most recently finished a solid second in the Jenny Wiley (G1). Right to her outside is Ollie’s Candy, a 4-year old filly who has not been out of the exacta in five career starts. She has wins on all weather and dirt and ran second in two graded stakes on the turf by just a neck in each one, with this her first start for trainer John Sadler. Win machine Vasilika drew post four and has reeled off three straight wins from as many starts in 2019. Ultra-competitive Elysea’s World will exit post seven and most recently won the 10-furlong Santa Ana (G3), making this a cutback in distance for her.

Big 'Cap winner Gift Box tops the Grade 1 Gold Cup at Santa Anita. He is perfect for his new(ish) trainer Sadler, with both victories coming in graded stakes company. Lined up to face him is New Orleans Handicap (G2) winner Core Beliefs, who's based in California but hasn't raced there in a year, along with Stymie winner Vino Rosso and Oaklawn Handicap (G2) runner-up Lone Sailor. Vino Rosso has never hit the board at the classic distance of 1 ¼ miles but stretches back out here. Core Beliefs, meanwhile, has never tried the distance, but he has also never been off the board at Santa Anita. Lone Sailor has also never hit the board going 10 furlongs but could do so here in what looks like a top-heavy field.

The Grade 1 Shoemaker Mile drew a competitive field, with top billing likely to go to one of Maker’s 46 Mile (G1) hero Delta Prince shipping in, or either of Frank E. Kilroe Mile (G1) 1-2 of Ohio and Catapult. They nearly finished in a dead heat. Former claimer Ohio latter will break from the rail and head for the lead while Delta Prince exit post eight and try to mow the front-runners down in the stretch. Last year’s Kilroe Mile winner Bowies Hero exits the far outside post in the field of nine and has been off form in his last several races. Graded stakes winner Sharp Samurai will make this his return after he was last seen winning the City of Hope Mile (G2) in October. And that’s just the tip of the iceberg for this race. I’d say there’s money to be made here.