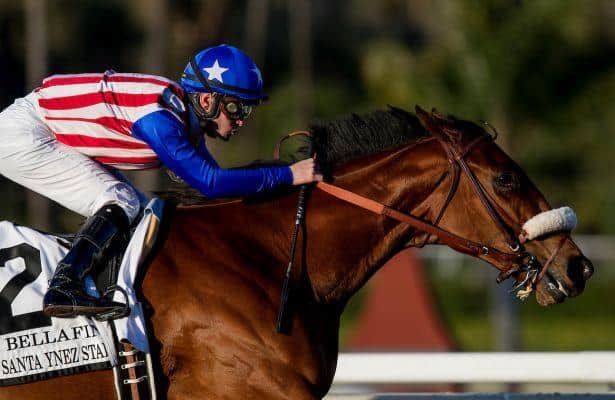 Three Stakes lead up to the Sam F. Davis

The Grade 3 Tampa Bay Stakes attracted a talented field of eight topped by 9-5 favorite Heart to Heart. This will be the 8-year old’s second start off the layoff, as he finished third in the Tropical Turf (G3) last month. He will face recent allowance winner Irish Strait, who will likely accompany him on the lead. Fort Lauderdale runner-up Qurbaan and fellow Grade 1 winner Divisidero are also part of the field. This race will likely produce one of the eventual top runners in the division.

Oaks points are on the line in the Suncoast Stakes. The nine fillies assembled for this event are all lightly raced and own zero stakes wins between them. Hut Hut Stakes runner-up Sweet Diane will exit the far outside post as your likely favorite. Second choice on the morning line Winning Envelope is interesting, as this will be her first start on traditional dirt after notching wins on the turf and all weather surfaces. Tapit’s Princess has been given an 8-1 shot despite owning the highest speed figure in the field. That is an absolute steal for the daughter of Lady of Fifty.

With Rymska definitely running at Gulfstream, Hawksmoor will be your probable favorite in the Grade 3 Endeavour Stakes. The multiple Grade 1-placed mare will be searching for her first victory since June 2017 despite being extremely competitive in top company since then. If Get Explicit returns in as good form as she was at the end of last year, she will give Hawksmoor a good run for the winner’s check. Goodyearforroses will race for the first time since November 2017 when she was 13th in the Breeders’ Cup Filly & Mare Turf. Trainer Brian House has put her through a recent string of stamina-building works, so she could be ready to fire big off the extended layoff.

Knicks Go is the tepid favorite in the field of 10 assembled for the Grade 2 Sam F. Davis Stakes. This will be his 2019 debut, and if he runs as well now as he did at the end of last year, he will be tough to beat. I went more in-depth on the race for this week's Head to Head handicapping feature.

Bellafina will take the next step toward the Kentucky Oaks when she goes off as the heavy favorite in the Grade 2 Las Virgenes Stakes. Last month she absolutely romped in the Santa Ynez (G2) at a bit of a shorter distance. Enaya Alrabb will try to turn a Starlet (G1) place into a Las Virgenes upset but will likely be just competing for second as Bellafina looks to be a lock in this short field and head to the Santa Anita Oaks (G1) for her final prep.

River Boyne drew the rail for the Grade 3 Thunder Road Stakes at a mile. The 4-year old colt is a perfect 6-for-6 at Santa Anita and 4: 3-1-0 at the distance. Regular rider Flavien Prat retains the mount for trainer Jeff Mullins. It will be interesting to see how the pace plays out, as there are no true front-runners in this field. I see River Boyne or Ohio being the one to pick up the pace out of the gate, but Blackjackcat could return to his former running style as that has worked best for him.

The Grade 2 San Marcos Stakes at 1 1/4 miles on turf attracted a field of 13 featuring a rematch between favored Chicago Style and Beach View, who were first and third, respectively, in the Hollywood Turf Cup (G2) back in November. Beach View and Dabster both exit the San Antonio (G2) over Santa Anita’s main track with Dabster prevailing over Beach View for third. Epical rides a two-race winning streak coming into this but will be stepping up in class trying to get his first graded win.

Rymska should go to post heavily favored in the nine-furlong Grade 3 Suwannee River Stakes at Gulfstream Park. The lightly raced 5-year old mare will be making her 2019 debut for top notch turf trainer Chad Brown and was last seen finishing sixth in the Matriarch (G1) in December. Others to watch out for are multiple Grade 3-placed Special Event and stakes winner Valedictorian. Without much early speed here, Valedictorian could pull off the upset on the lead.

Later on the card, Nearctic (G2) winner Hembree tops a large field in the El Prado Stakes. The 7 1/2-furlong turf sprint will mark the Mike Maker trainee’s first of the season, and he will break from post eight. Second choice Siem Riep will be out front where he will likely be joined by Mr Cub, notably a runner-up to eventual Pegasus World Cup Turf (G1) winner Bricks and Mortar last out. Those two have the class to get it done straight out of the gate while Hembree will have to mow them down in the stretch.

Winter Sunset takes the next step at Fair Grounds

Regally bred Winter Sunset won upon debut, breaking on top and extending her advantage throughout a 7 1/2-furlong maiden race on the turf. On Saturday she will take another small step forward when she faces five others in the new Shantel Lanerie Memorial Overnight Stakes named in honor of jockey Corey Lanerie's late wife. Winter Sunset will have her work cut out for her, though, as she faces Jimmy Durante (G3) winner Elsa and stakes-placed Red Rounder. An interesting addition to the field is Golden Rod (G2) winner Liora. The Candy Ride filly has one previous start on the turf, a close third in a maiden race. If Winter Sunset runs the same race she did in her last outing, she could have company on the front end. A contested pace gives the advantage to Elsa. Post time is 3:23 p.m.