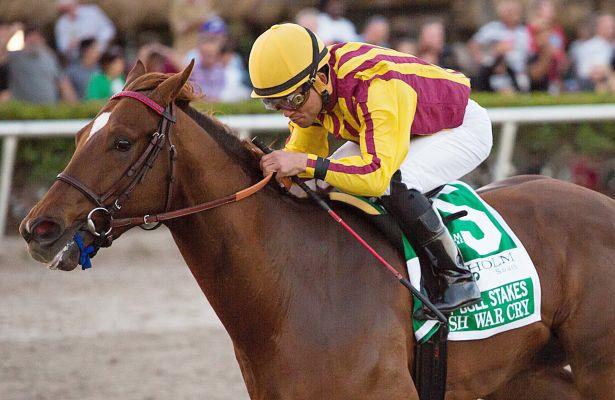 This weekend’s races are a bit on the light side as the Kentucky Derby and Oaks trails take a pause. Additionally, there are only two graded stakes races on tap. The big draw will be Irish War Cry’s return in the Hal’s Hope at Gulfstream Park, while Breeders' Cup Turf Sprint winner Stormy Liberal headlines the weekend’s other graded stakes.

As always, given post times are in Eastern Standard Time.

Off since finishing eighth in the Pennsylvania Derby (G1) in September, Irish War Cry returns in the Grade 3 Hal’s Hope Stakes at Gulfstream Park. The 4-year old son of Curlin has one win in two starts at the South Florida oval. Last year he won the Holy Bull (G2) before finishing a well-beaten seventh in the Fountain of Youth (G2).

The colt has been working steadily at Palm Meadows toward his comeback, including three straight stamina-building, bullet six-furlong works to complete his preparation. He will have to be sharp, though, because he will be facing 2017 Rebel Stakes (G2) winner Malagacy, who's eligible to improve in his second start off the layoff, and multiple graded stakes placed Giuseppe the Great, who has only been off the board once in four starts at Gulfstream Park.

Calculator has done a little bit of everything in his career. He has run on dirt, turf, and all weather tracks, but it’s on Santa Anita’s downhill turf course where he has truly shined. Already a perfect 3-for-3 there, Calculator will attempt to keep the streak going when he makes his second start of 2018 in the Grade 3 Daytona Stakes.

The 6-year old is one of three in the field for trainer Peter Miller, who will also saddle Conquest Tsunami and Stormy Liberal, the recent Breeders' Cup Turf Sprint winner. Conquest Tsunami won his only start on the downhill course, which incidentally was his 2018 debut and first start for Miller. Meanwhile, Stormy Liberal has been in the exacta 10 of 12 times on this same course and is making his first start domestically after a trip to Hong Kong. With these three, Miller stands a very good chance of saddling multiple finishers on the board.

Last year Blueridge Traveler ran second in the Spiral Stakes (G3) for trainer Kenny McPeek. The colt was given some time off after that effort and has since gone 4: 2-1-1 with impressive Equibase numbers. While he is heavily favored to win the Maxxam Gold Cup at Sam Houston, the field is not without other talent. Stakes winners Social Misfit, Net Gain, Holiday Mischief and Hyper Drive will also go. Social Misfit has been running in restricted company, and Net Game’s best most recent numbers have been on the turf Additionally, Holiday Mischief steps back up in class despite still not running quite up to form, and Hyper Drive has been useful as of late but has not been winning. Franco rounds out the field. A 4-year old gelding, he has raced just five times but has never been out of the exacta. It will be quite interesting to see how this group does against each other.

Reride favored in Mine That Bird Derby

Winchell Thoroughbreds-bred and owned Reride has just one blemish on his resume, a sixth-place finish in the Kentucky Jockey Club Stakes (G2). Trained by Steve Asmussen, the Candy Ride colt has won on dirt and turf but has not proved himself at a route distance. He will attempt going 1 1/16 miles again on Sunday when he faces eight in the Mine That Bird Derby. He is the odd man out in that he has never raced at Sunland Park and is one of three that have graded stakes experience. His biggest competition looks to come from the one-two finishers of the Riley Allison Stakes, Runaway Ghost and Beautiful Game respectively, and impressive allowance winner Trigger Warning. The race serves as a local prep for next month's Sunland Derby (G3).