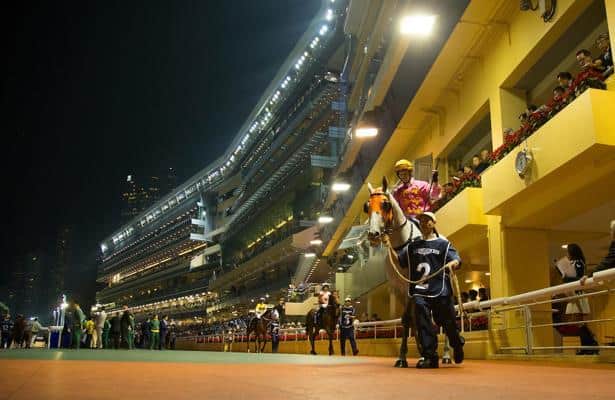 If you’re looking for a solid international race or top-notch 2-year old racing, this is the weekend for you. The Longines Hong Kong International Races and the Clasico del Caribe, run for the first time in the United States, are both on tap, the former set for Sunday and the latter on schedule for Saturday. Both series of races drew large, competitive fields. Also, the juvenile star at both Los Alamitos and Gulfstream, and at Fair Grounds, the state-breds are on display.

Read on to see which stars are out this weekend, both domestic and abroad.

In July 2016, the Confederation of Caribbean Racetrack announced the unanimous approval of Gulfstream Park as the host of the 2017 Clasico Internacional del Caribe, the premier Thoroughbred racing event in the Caribbean. Since its inception in 1966, the Clasico Internacional del Caribe has never been run at a facility outside the Caribbean or Latin America, making this a truly historic move. The Clasico consists of five races with purses totaling $600,000, including the $300,000 Caribbean Classic, making it the largest purse day in all of Latin American racing. The other four races comprising the event are the Lady Caribbean Cup for 3-year old fillies, the Confraternity Caribbean Cup for 3-year olds and upward, the Caribbean Cup Speed Stakes for 3-year old sprinters, and the Invitational Cup Stakes for 3-year olds and upward. These five races will close out the Saturday card and will be preceded by six stakes for 2-year olds.

This is probably the understatement of the year, but here in the United States, we retire our race horses, particularly the colts, early. Outside the U.S., they do things differently. A prime example of this is Puerto Rican Triple Crown winner Arquitecto. Perhaps the biggest shock is that the son of Hockenheim is a gelding. While the fact that he is a gelding might not be so shocking in and of itself, the real shock is that he was not gelded until after he won the Triple Crown. That measure came sometime between winning the Triple Crown in 2012 and spring of 2013. He has since continued to race, winning graded stakes in every year except 2015.

Arquitecto won last year’s Confraternity Caribbean Cup with Irad Ortiz, Jr. aboard, a first for both horse and rider. Previously, Arquitecto had finished second in the race in 2012, then ran third in both 2013 and 2014. He missed the race in 2015, and won last year’s edition thanks in large part to a brilliant ride from Ortiz, Jr. A native of Puerto Rico, Ortiz, Jr.’s win aboard Arquitecto in the Confraternity Caribbean Cup was his first in a Caribbean International race and did not come easily. After sitting eight lengths off the early leaders, Ortiz, Jr. gave the gelding his cue nearing the 600-meter mark. By the time the pair hit the top of the lane, they had the lead by two lengths but Arquitecto was tiring. It was only Ortiz, Jr.’s hard riding that kept the gelding going en route to a 2 ½-length victory.

When it comes to winning the Grade 1 Los Alamitos Cash Call Futurity or the Grade 1 Starlet, there’s none better than Bob Baffert in recent years. He’s won the Futurity nine times, including all three editions run at Los Alamitos, and the Starlet three times. For this year’s edition of the Futurity, Baffert sends out Breeders’ Cup Juvenile and Grade 1 Frontrunner runner-up Solomini along with maiden winner McKinzie. The latter is narrowly favored on the morning line, with McKinzie being tabbed at 6-5. Baffert will also send out 8-5 favorite Dream Tree in the Starlet. Should he saddle the winner of both races on Saturday, Baffert would be the first trainer to do so in the same year.

The Vase drew Breeders’ Cup Turf winner Talismanic and 2015 Vase winner Highland Reel, as well as South African champion mare Smart Call. Since the Vase distance is rarely contested in Hong Kong, this is the one race that the local contingent does not have the advantage. Helene Charisma has the best shot of any of the local runners, having won at the 2,400 meter distance prior, but is known as a temperamental sort. The addition of blinkers by trainer John Moore will hopefully aid in the focus department.

American Stormy Liberal leads the foreign invaders for the Sprint. The gelding has won five of his last six races, most recently annexing the Breeders’ Cup Turf Sprint. Group 1 Al Quoz Sprint winner The Right Man will also contest the race. Local runners include Mr Stunning and last year’s Sprint runner-up Lucky Bubbles. 2015 Sprint winner Peniaphobia returns for another shot, as well. The locals have taken home the trophy in seven of the last 10 years.

As with the Sprint, the Hong Kong Mile has had a tendency to go to the locals -- nine times in the last 10 years to be exact. While the locals are well represented, the foreign invaders will not be easily outdone. Aidan O’Brien alone sends out Breeders’ Cup Mile runner-up Lancaster Bomber and Roly Poly, who won three straight group ones over the summer before finishing a disappointing 11th in the Breeders’ Cup Mile. Also exiting the Breeders’ Cup Mile is seventh place finisher is France-based Karar.

O’Brien will also send out Deauville and War Decree in the Hong Kong Cup. Other notable entrants include Blond Me, winner of the G1 E. P. Taylor Stakes at Woodbine last out, and 2015-2016 Hong Kong Horse of the Year Werther.

Mobile Bay's back to defend his Louisiana Champions Day title.

Much like Maryland Millions and Sunshine Millions Day, Louisiana has its own Champions Day. Hosted by Fair Grounds Race Course, this year’s 13-race card is restricted to Louisiana-bred runners. The day includes spots for top-level Quarter Horses, lower-level claimers, maidens, and stakes runners.

Of particular significance this year is Mobile Bay, a 5-year old intact son of Lone Star Special. A winner of more than $1 million in 25 career starts, the Tigertail Ranch-owned horse won last year’s edition of the Louisiana Champions Day Classic and ran second in the 2015 edition. Mobile Bay will be fresh having not raced since winning the Feb. 11 Louisiana-Bred Premier Night Championship Stakes at Delta Downs.