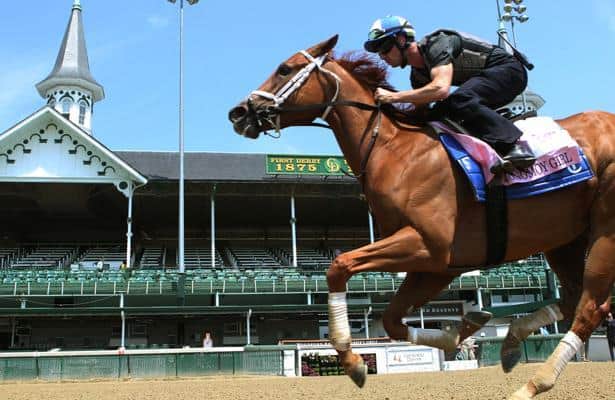 It’s as if the Breeders’ Cup came early this year! No less than nine stakes lead up to Saturday's third leg of the Triple Crown, and there are stars galore. And while racing turns its attention to New York and Justify's run in the Belmont Stakes, there are notable events happening elsewhere, too. Santa Anita features graded stakes racing Saturday and Sunday, Churchill Downs plays host to a nice turf event, and Ontario-breds gear up for their own Triple Crown at Woodbine.

Catch all the highlights below. Post times are all in Eastern Standard.

Nine stakes lead up to the Belmont

Mask will attempt to rebound off a disappointing effort in the Pat Day Mile (G3) in the Easy Goer Stakes. Prior to that, he had been perfect in two starts, including a stakes victory at Gulfstream Park. It’s possible that the Tapit colt just did not appreciate the slop at Churchill Downs on Derby Day. Conversely, Rugbyman broke his maiden by 14 lengths in the mud at Belmont. Phipps Stable’s Breaking the Rules in undefeated in two starts but will be stretching out for the first time. Battle tested Dark Vader and High North are both legitimate contenders, as well.

Like Mask, Abel Tasman will be looking to do better than in her last start, when she bothered and steadied en route to a fourth-place finish in the La Troienne (G1). One of her biggest competitors in the Grade 1 Ogden Phipps comes in the form of American Gal, who is expected to run Friday in the Bed o’ Roses but is cross-entered in this spot. Ivy Bell will definitely run in this spot, while the decision regarding Highway Star is also still up in the air. Pacific Wind is also a major competitor, having won the Ruffian (G2) last out over this very track.

Monomoy Girl stands tall in the Grade 1 Acorn Stakes and would be a good single in vertical wagers cutting back off her Kentucky Oaks win. Moonshine Memories poses a big threat, however, second off the layoff. She gave a solid effort in her season debut and will be sharper off that effort. Breeders’ Cup Juvenile Fillies winner Caledonia Road could also spring the upset second off her own layoff. Last out, she won at Belmont Park.

For jockeys with Belmont Stakes mounts, the Grade 2 Brooklyn Invitational at a mile and a half will provide valuable race day experience for the conditions. War Story is the morning line 2-1 favorite off his second place effort in the Charles Town Classic (G2) and won this very race last year. Check-cashing Hoppertunity is too consistent to be ignored, and Hard Study is riding a three race win streak, including the 1 ¾-mile Birdstone Stakes.

The Peter Miller-trained duo of Stormy Liberal and Conquest Tsunami are making their first starts since finishing second and third, respectively, in the Al Quoz Sprint (G1) in the Grade 2 Jaipur Invitational. Neither were made the morning line favorite, however. That honor went to Disco Partner, who last won back in October but is proven over the Belmont turf. Pocket Change is an interesting new shooter, and at 10-1 odds with an undefeated record, could be worth a look. Blind Ambition is another one to take a hard look at as he is perfect at Belmont.

It should come as no surprise that Chad Brown will be saddling the two favorites in the Grade 1 Just A Game Stakes. Beaugay (G3) winner A Raving Beauty is the favorite followed by Jenny Wiley (G1) third place finisher Off Limits. Graded stakes winners On Leave, Dream Dancing, Lull, Proctor’s Ledge, Cambodia, and La Coronel comprise the rest of what is certainly a loaded field.

Two-time Golden Shaheen (G1) winner Mind Your Biscuits breaks from the rail as the Grade 1 Metropolitan Handicap favorite. Lined up to face him are dual grade one winner Bolt d'Oro, the lone 3-year-old in the field; sprinters Ransom the Moon and Limousine Liberal; multiple graded stakes winners McCraken, Awesome Slew and Good Samaritan; as well as graded stakes winners Bee Jersey and One Liner. Bee Jersey will likely flash early speed from the outside while the rest of the field are presser and closer types.

The final race prior to the featured Belmont Stakes is the Grade 1 Manhattan. Like in the Just a Game (G1), trainer Chad Brown has the two favorites. Undefeated multiple graded/group winner Robert Bruce breaks from the rail as the 3-1 second choice while 5-2 favorite Beach Patrol will exit gate ten in the field of thirteen. Man O’ War (G1) winner Hi Happy and runner-up Sadler’s Joy are also in the field.

Superstar Justify will break from the rail as he attempts to give trainer Bob Baffert his second Triple Crown sweep. The Scat Daddy colt will face nine rivals, including Blended Citizen, the only runner in the field to already have raced and won at Big Sandy. Bravazo and Hofburg are both being given good shots based on their respective superb performances in the Preakness and Derby. The hunch bet of the day goes to Gronkowski, who is owned in part by his namesake, New England Patriots tight end Rob Gronkowski. If Tenfold progresses off his Preakness run, he will be another at which to take a long look. Post time is 6:46 p.m.

Though the biggest turf stars are running in New York, the Grade 3 Mint Julep Handicap at Churchill Downs still drew a large field of 11. Despite not even hitting the board since November, Lovely Bernadette was installed as the 3-1 morning line favorite based on back class. Res Ispa has shown better recent form and is the second choice at 7-2. Also showing good recent form is Sully’s Dream, while Celestial Insight makes her season bow for new trainer Graham Motion. Post time is 5:58 p.m.

Fatale Bere one to beat in Honeymoon

Three-year old fillies take to the turf in the 1 1/8-mile Grade 2 Honeymoon Stakes. Providencia (G3) winner Fatale Bere tops the field with the third-place finisher in that event, Paved, back for more. Lightly raced Animosity will try to make it three wins from as many career starts. It looks to be a good betting race as there are quite a few in here that could win this. Post time is 6:30 p.m.

Wonder Gadot, who just missed in the Kentucky Oaks (G1), returns home to Woodbine to contest the Woodbine Oaks. Only four are lined up to take her on, making the Medaglia d’Oro filly the overwhelming 1-5 favorite, though Dixie Moon is certainly one to keep an eye on.

Prior to the running of the Oaks is the Plate Trial, the local prep for the Queen’s Plate. Telekinesis, who was second in the Lexington (G3), is the 2-5 morning line favorite in the field of seven. Todd Pletcher ships in with the second betting choice Scrapper, while Silent Sting gets the “horse for course” nod.

Solomini gets new jockey in Affirmed

Hard-knocking Solomini, who was tenth in the Kentucky Derby (G1) in his last outing, will have Martin Garcia aboard for the first time when he faces five others in the Grade 3 Affirmed Stakes. Regular jockey Flavien Prat had also been the rider for Axelrod and Run Away and will be in the irons for the latter. Solomini is the class of the field, which should see him getting his picture taken for the first time since breaking his maiden. Post time is 7 p.m. Sunday.