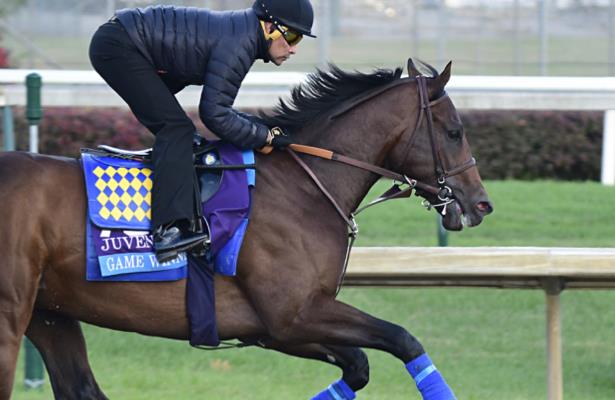 With the championships ahead, a two-part Weekend Watch will focus solely on Breeders' Cup races. Beginning this year, all five races for 2-year-olds run on what has been dubbed "Future Stars Friday."

Several years ago, the Breeders’ Cup tried running a Juvenile Sprint on the main track but dropped it after just two years due to a lack of appeal. The turf counterpart is already more successful with an over-subscribed field signed up to go 5 1/2 furlongs on the turf in Friday's first Breeders' Cup race. I attribute this to the international appeal this holds, as nine of the sixteen total entrants hail from overseas while many of our domestic entrants have raced in Europe as well. Oddly enough, it is Mark Casse’s Strike Silver, a winner on turf and dirt, who is the one to beat. The Violence colt drew the rail, which suits his typical running style perfectly. Wesley Ward-trained Shang Shang Shang, a Shanghai Bobby filly, is my personal selection here despite the four-month layoff. She’s undefeated, with a victory on turf and dirt, and has the speed and class to carry her to victory. With such a large field and so many talented runners, it was hard to settle on a top longshot selection, but I landed on the Aidan O’Brien-trained Scat Daddy filly So Perfect. She has never been worse than fourth in her career with two close on the board placings in Group 1 events. Post time is 3:21 p.m.

Newspaperofrecord tops the Breeders’ Cup Juvenile Fillies Turf, and for good reason. The Chad Brown-trained Lope de Vega (IRE) filly is undefeated in two career starts, both by open lengths traveling 1 1/16 miles. My biggest question with this filly is how she would handle a firmer surface as both of her victories have been on yielding courses. But it looks like Newspaperofrecord will get preferred footing given rain in Louisville ahead of Friday's race. Beyond the big favorite, the Juvenile Fillies Turf is quite competitive. Natalma (G1) winner La Pelosa is a logical longshot for trainer Charlie Appleby, but if you’re seeking a “bomb” selection, look no further than 30-1 shot Lady Prancealot. This Irish-bred filly has relished the firmer turf in North America, posting two solid runner-up finishes in stakes company at the one-mile distance they'll run Friday.

Dual Grade 1 winner Bellafina commands top billing in the Breeders’ Cup Juvenile Fillies, but the 2-1 morning line favorite will have her work cut out for her. The front-runner drew the far outside post in a field of 10, and fellow top selections Jaywalk (post 7), Restless Rider (post 4) and Serengeti Empress (post 2) are speedy types as well. With so much pace, it certainly doesn’t hurt to look elsewhere for a possible winner. I landed on Spinaway (G1) winner Sippican Harbor (12-1) who has shown the ability to run away from the field on the lead or rally from off the pace if bad racing luck strikes. She has not won beyond seven furlongs, but the way she took her last two makes me think distance will not be a problem.

European shipper Anthony Van Dyck gets the nod as favorite in the Breeders’ Cup Juvenile Turf despite drawing the far outside post in a full field of 14. The son of Galileo is 6: 3-1-1 with two group stakes wins and a pair of on the board placings in Group 1 company. The Todd Pletcher-trained Current, winner of the Bourbon (G3), and Jeremiah Englehart-trained Forty Under, winner of the Pilgrim (G3), are no slouches and will certainly represent the U.S. well. Uncle Mo-sired Forty Under won his last two races traveling 1 1/16 miles and will be getting a slight distance break while Current’s last two races were wins at a mile or longer. I’m not looking for a bomb in here, but I do have a pair of longer shots that I like. Maiden War of Will is one I believe I can count on to fill out my exotics. The Mark Casse-trained War Front colt likes to go to the front but gets caught late in the stretch. Somelikeithotbrown is another I like underneath. He was the runner-up in his last two starts, a pair of Grade 3 events. As with War of Will, Somelikeithotbrown will likely be near the lead early. Longer shot Line of Duty (IRE) is another I would not leave off tickets. One of the colts he beat in the Prix de Conde (G3), Wonderment, went on to become a Group 1 winner after that loss.

Today’s juvenile star could be tomorrow’s Kentucky Derby favorite. The key Friday is picking the best current runner going 1 1/16 miles. The Breeders’ Cup Juvenile is your typical East Coast vs. West Coast affair with undefeated Champagne (G1) winner Complexity facing off with undefeated Del Mar Futurity (G1) and American Pharoah (G1) winner Game Winner. Both colts have posted triple-digit Equibase figures in their last two starts. The only other colts in the field with a triple digit figure are Champagne runner-up Code of Honor and American Pharoah runner-up Gunmetal Gray. I have a couple of longshots I like here, however. Tight Ten is tested at 1 1/16 miles having been caught late in the Iroquois (G3). Mind Control, on the other hand, is a Grade 1 winner but has not raced beyond seven furlongs. With so much speed in this field, there is one other I’m looking quite hard at: the other Klaravich-owned, Chad Brown-trained runner Standard Deviation, stablemate of Complexity. This Curlin colt will likely come from further off the pace and could certainly pick up some pieces, if not the victory.