Weekend Watch: When to tune in on a blockbuster Saturday 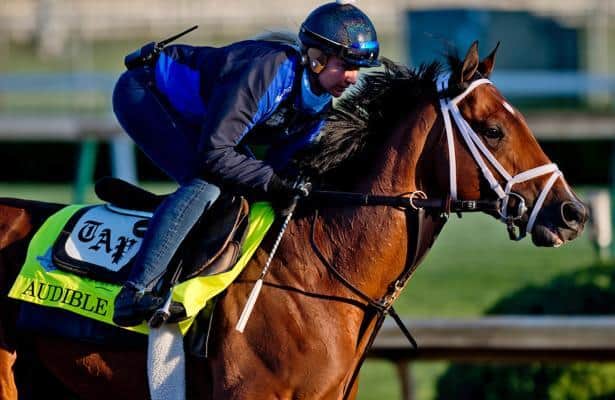 Each weekend, Horse Racing Nation previews the top races to tune into coast to coast and runs down the main contenders. All times are Eastern with this a blockbuster Saturday of racing around the world.

Todd Pletcher-trained Coal Front leads the American contingent in the Group 1 Godolphin Mile. The 5-year old notched a pair of grade three victories over the winter at Gulfstream and should be fit as a fiddle for this race. A victory in Dubai would be the biggest of his career thus far.

Melbourne Cup winner Cross Counter heads the field for the two mile, Group 1 Dubai Gold Cup. The U.S. will be represented by longshot Platinum Warrior, winner of the San Marcos (G2) in his last outing for trainer John Sadler. Ispolini, who already has a win at this meet, will likely be the second choice.

Champion Stormy Liberal will be seeking retribution in the Group 1 Al Quoz Sprint after falling to Jungle Cat in this event last year. He will have to get past Blue Point, however. Trained by Charlie Appleby, the morning line favorite won two graded preps at Meydan during this meet and is the reigning King's Stand (G1) at Royal Ascot.

The Group 2 UAE Derby attracted a mixed field of colts and fillies topped by UAE Oaks (G3) winner Divine Image. U.S. runners include Stubbins, winner of an off-the-turf Santa Anita stakes, plus previous Kentucky Derby trail runners Plus Que Parfait and Gray Magician. The winner will have a guaranteed spot in the gate for the Derby.

Breeders’ Cup Sprint winner Roy H is out of the Group 1 Dubai Golden Shaheen due to a sore foot, but the U.S. will still be represented by a strong trio consisting of Imperial Hint, Promises Fulfilled and X Y Jet, who ran second in this event in both 2016 and 2018. They should all factor for the trifecta so long as they don’t burn each other out in a speed duel.

Japanese star filly Almond Eye is the heavy favorite to win the Group 1 Dubai Turf. She will meet Dream Castle, who is undefeated in 2019 with all three victories coming at Meydan. American interests will be represented by Without Parole, who while based in Europe is campaigned by John and Tanya Gunther, Justify's breeders.

Shockingly, Pegasus World Cup Turf (G1) runner-up Magic Wand is not the favorite for the Group 1 Dubai Sheema Classic. That honor goes to Old Persian, winner of the Dubai City of Gold (G2) at Meydan earlier in the month. Not surprising, however, is the lack of American representation.

Group 1 Dubai World Cup favorite North America has had plenty of interruptions to his career, but he came back off his latest extended layoff as good as ever, notching two Group 2 victories to open his season. Last year’s World Cup winner Thunder Snow returns to defend his crown; however, there has never been a repeat winner of this prestigious race. The U.S. sends out Gunnevera, Audible, Seeking the Soul, Pavel, and Yoshida.

Prince Lucky is the 2-5 morning line favorite in the Grade 2 Gulfstream Park Mile. Trained by Todd Pletcher, the 4-year old gelding enters off a career best effort in the Hal’s Hope (G3) last month. Tale of Silence, who was fourth in the Hal’s Hope, returns to try and turn the tables.

Aqueduct’s Saturday card is devoted entirely to the Claiming Championship. The series of races is open to horses which have started for a claiming price in 2018 or 2019. The 10 stakes races are worth $620,000 and range in distance from six furlongs to 1 3/8-miles. The first race kicks off at 1:30 p.m. with the final race going to post at 6:20 p.m.

Undefeated Point of Honor and recent maiden winner Dunbar Road are the top choices in the Grade 2 Gulfstream Park Oaks. Neither filly has been seriously challenged thus far in their careers and will be seeking points to head to Kentucky in May. Davona Dale (G2) runner-up Cookie Dough owns the best numbers in the field, however, and could be dangerous after just missing last time.

William L. McKnight (G3) runner-up Soglio is the tepid 3-1 favorite in the Grade 2 Pan American Stakes. The gelding has never been off the board at Gulfstream. Six-year old Canessar had a rough trip in that same race and will likely run much better here. Meanwhile, top turf trainer Chad Brown sends out Focus Group off a third-place finish in the Canadian International (G1). He has not started since then and could need the race.

With racing back underway in Arcadia, Calif., they're running the Grade 1 Frank E. Kilroe Mile originally scheduled for March 9. Catapult looms as a big favorite after not liking the soft ground in the Pegasus Turf. He'll take on local graded winners Next Shares and River Boyne at eight furlongs.

Speedy Hidden Scroll is the 5-2 favorite in the Grade 1 Florida Derby despite tiring and finishing fourth in the Fountain of Youth (G2) last out. For a closer look at the field, check out our Head to Head handicapping.

No surprise here to see Bob Baffert set to saddle three of seven runners in the Grade 2 San Carlos at seven furlongs. His Ax Man and Dr. Dorr are the Top 2 morning line choices, but every contender in this field is recognizable. It's more a question of which runner can be considered in top form.

The Grade 2 Santa Ana runs through the Irish-bred Elysea's World, who will be going second off the layoff but is a multiple graded stakes winner, and Streak of Luck, who exits the Buena Vista (G2) and a 1 1/2-length defeat to the streaking Vasilika. No shame in that loss. This race runs at 10 furlongs on turf.

Another race brought back from an axed card earlier this month, the Grade 1 Beholder Mile features the sprinters Marley's Freedom and Selcourt stretching out a furlong farther than when they ran 1-2 last time in the Santa Monica (G2). Also notable here: Trainer John Shirreffs continues to try righting Paradise Woods after she was fifth in the Santa Monica.