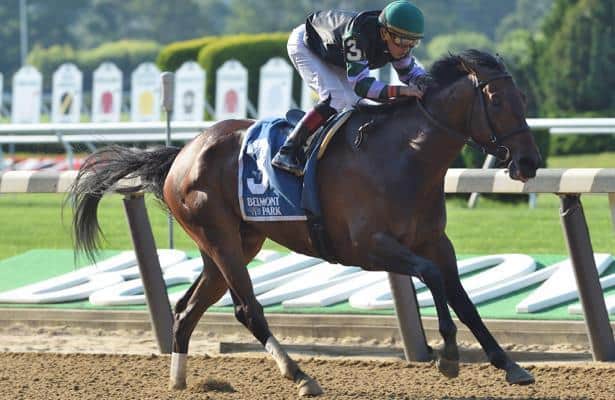 The racing world will go rather quiet between now and the first week of May, but quiet does not mean that nothing significant is happening. Laurel Park and Charles Town both offer significant races on their Saturday cards, with a number of minor stakes supporting them. Also, Keeneland continues its spring meet while Santa Anita continues to offer high-level racing.

Check it all out here with all given post times in Eastern Standard.

Itsinthepost takes his show on the road

Itsinthepost (FR) has rattled off three straight wins to begin 2018, all of them in California. He will travel back to Keeneland to defend his Grade 2 Dixiana Elkhorn Stakes title. He is 3-for-4 at the 12-furlong distance and 1-for-1 in Lexington. It seems that where Itsinthepost goes, Hayabusa One goes. The two have met twice already this year with Hayabusa One coming out worse for the wear both times. Neither competitor scared off anyone as 10 others comprise the field. Group 1 winner Some in Tieme, grade one winner Bullards Alley and Grade 1-placed Oscar Nominated are also part of the field.

There are quite a few story lines in this year’s Grade 2 Charles Town Classic, worth $1.2 million. Aside from the fact that this race was nearly cut from the track’s stakes schedule, the horses themselves are certainly of note. Diversify smartly stepped out of state-bred company last year when he took the Jockey Club Gold Cup (G1) in his graded stakes debut. A win on Saturday would elevate him further, making him a millionaire as well as a winner at the highest level. He has not raced since running fourth in the Clark Handicap (G1) but has been steadily working bullets leading up to his 2018 bow.

Fear the Cowboy will be getting major class relief after facing many of the best in his last two outings. He has plenty of room to move forward off those two efforts. Discreet Lover ran a career best race when winning the Excelsior (G3) last out despite stumbling at the start. If he runs back to that effort, he could be dangerous. War Story is the only runner in the field that has experience at the Charles Town bullring having run third in this race last year. He got a nice confidence building win in the Challenger at Tampa Bay last month. That coupled with his previous experience in West Virginia should translate to a good effort this weekend.

Kentucky Derby prep season may be over, but there are still some races significant to the overall Triple Crown coming up. One of those is the Federico Tesio Stakes at Laurel Park. The winner will receive automatic entrance into the Preakness Stakes, the second leg of the Triple Crown. The Federico Tesio drew a field of 11, headed by Maryland-bred Still Having Fun. The colt was most recently fourth in the Private Terms Stakes due to being pinched and stumbling at the start. Such an occurrence is not uncommon as the colt has run into trouble in four of his five starts. Swale (G3) third-place finisher Diamond King ships in from Florida, as does undefeated state-bred winner Noble Commander.

Saturday's card is headlined by the Grade 2 Kona Gold Stakes for dirt sprinters, and the Grade 3 American Stakes is for turf milers. Both races are for 3-year olds and upward.

The Kona Gold drew just five entrants. Ransom the Moon, who was fifth in the Breeders’ Cup Sprint (G1), has been installed as the 9-5 morning line favorite and will be making his 2018 debut. He will face Triple Bend (G1) runner-up Bobby Abu Dhabi, recent allowance winner Ten Blessings, Daytona (G3) third place finisher Calculator, and Blameitonthelaw.

Blackjackcat, who was third in the Breeders’ Cup Mile, headlines the American Stakes. The race drew nine entrants all together. Recent allowance winner Kenjisstorm is the second betting choice, and a few others in the field could potentially make some noise.

Sunday’s Grade 3 San Juan Capistrano Stakes, carded at 1 3/4 miles on the turf at Santa Anita, is the type of race you don’t often see anymore. Breeders are more interested in precociousness and speed rather than stamina. So it’s not hard to understand why this race drew a small field of runners most are probably not familiar with. Six-year old mare Evo Campo is best going long and might also be the best in the field. She will face six male rivals. Post time is 5 p.m.