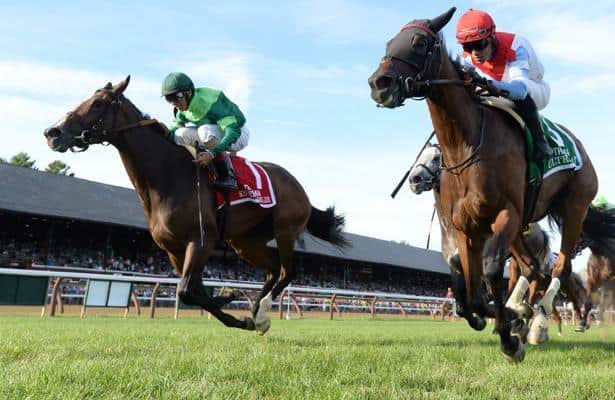 The Grade 3 Sanford Stakes for 2-year olds going six furlongs attracted just five runners. Mark Casse-trained Cucina, a maiden winner, is the 8-5 morning line selection. All five entrants are winners with the longshot standing at 6-1. Handicapping the juveniles this early in the year can be tricky and any of these five could conceivably win. Personally I’m going with By Your Side, who has the highest last race speed rating and debuted going 5 ½-furlongs.

Simply Breathless tops the Grade 3 Modesty Handicap, a 1 3/16-mile turf affair for fillies and mares 3-years old and upwards. The 4-year-old daughter of Bated Breath has won both U.S. starts for trainer Neil Drysdale but will be stretching out beyond 8 1/2 furlongs for the first time. Fellow import Juliet Foxtrot has also won both of her U.S. races, but she did so in allowance company while Simply Breathless competed in stakes company. There’s no true speed in this field, so it will be interesting to see who ends up setting the pace; I believe Remember Daisy will be the heir apparent but her running style has changed recently. Local runner Na Pali Spirit has never been out of the exacta at Arlington and looks like she has a fair chance here.

Captivating Moon is the tepid morning line selection in the 1 3/16-mile, Grade 3 Arlington Handicap for 3-year olds and upward on the lawn. Multiple graded stakes placed, the 4-year-old will be making his 2019 debut, entering off a nearly ten month layoff. Second choice Bandua is looking for his first win of the year and drops in off a sixth place finish in the Manhattan (G1). Chilean Grade 1 winner El Picaro drops in out of a good U.S. debut in the Wise Dan (G2) and will be looking to set the pace. Cullum Road also exits the Wise Dan and is searching for his first graded win.

This year’s Grade 1 Diana Stakes is all about quality rather than quantity. Multiple grade one winner Sistercharlie is back to defend her title, which was the first of three consecutive grade one wins to close out 2018. The 5-year-old mare has never been worse than second in the U.S. and has been training forwardly for Chad Brown. Stablemate Rushing Fall is the narrow second choice and is riding a four-race win streak, the last three coming at the highest level. Unlike Sistercharlie, this filly already has two wins for the year and is definitely racing fit. Chad Brown will also saddle third choice Homerique, who is undefeated in two graded starts in the U.S., and longshot Thais. Also part of the field are graded stakes winners Secret Message and Mitchell Road, who is just a half-length shy of being undefeated in her career.

Flying Scotsman will likely go favored in the field of thirteen assembled for the Grade 3 American Derby, a 1 1/16-mile turf race for 3-year olds. The son of English Channel ships in from California for his 2019 bow. He is certainly the class of the field and will exit post eleven looking for the lead. Recently gelded Crafty Daddy drew post twelve and is on a three-race win streak. He will keep regular rider Florent Geroux. Bundibunan has been quite competitive throughout his career thus far though he has only notched one win. Look for this one to be part of the exotics.

If Bob Baffert does not win this year’s Grade 3 Los Alamitos Derby, then something has gone terribly wrong in the racing world. Breeders’ Cup Juvenile winner Game Winner is the heavy 1-5 favorite in the minuscule field of four. Stablemate and California Derby winner Kingly is the second choice despite entering off a disappointing fifth in the Affirmed (G3). Two longshots, including a maiden, fill out the field.

Fair Grounds Oaks (G2) winner Street Band will go favored in an overflow Grade 3 Indiana Oaks field. Second choice Chocolate Kisses returns to the dirt after running fourth in the Wonder Again (G3) on the turf in her last outing. Allowance winner Kim K will break from the rail and go looking for the lead while maiden winner Sundaysatthebeach will be looking to score in her graded debut.

Grade 3 winner Mr. Money will be looking to make it three in a row when he exits the far outside post in the Grade 3 Indiana Derby. Just to his inside is Ohio Derby (G3) runner-up Math Wizard. UAE Derby (G2) runner-up Gray Magician is looking for redemption following a dismal performance in the Kentucky Derby. Also looking to bolster his name again is Alwaysmining. This gelding was the “it” horse entering the Preakness Stakes but did not run to his hype. Seven others comprise the field.

Monomoy Girl to get 'brief break' due to muscle soreness
Two-time champion Monomoy Girl will be given "a br...

Why one new shooter skipped Ky. Derby to run in 2021 Preakness
Who skips the Kentucky Derby to get to the Preakne...