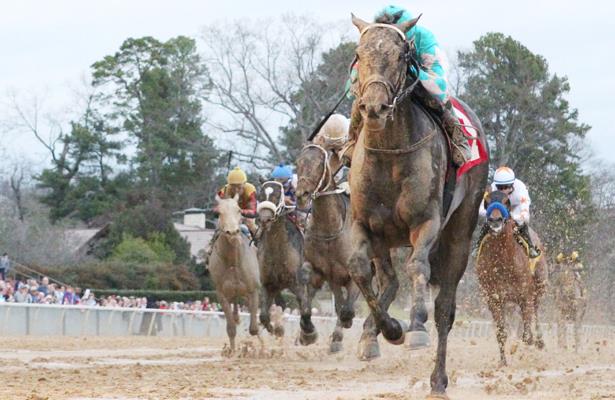 Spring has sprung, which means that the 2018 Kentucky Derby trail is entering its final round. With only a few exceptions between now and the first weekend in May, qualifying races will offer a total of 170 points, meaning if you win, you’re in. A second-place finish guarantees a spot in the gate at Churchill Downs as well, and a third-place effort could do the trick for those that have already accumulated some points.

Check out the weekend’s prep races and more on this week’s edition of Weekend Watch. All given post times are in Eastern Standard.

My Boy Jack will visit his third track in as many starts when he heads Saturday's Grade 2 Louisiana Derby at Fair Grounds Race Course. He was last seen convincingly winning the Southwest (G3) on a muddy Oaklawn Park track and will face the top three from the Risen Star (G2), the local prep for the Louisiana Derby. Bravazo got up in the shadow of the wire to win the Risen Star after letting Snapper Sinclair do all the heavy lifting. Noble Indy was third that day after getting bumped at the break and being trapped along the rail for most of the race.

One race prior, nine will line up for the Grade 2 Fair Grounds Oaks. The Rachel Alexandra (G2) winner Monomoy Girl skips this in favor of the Grade 1 Ashland Stakes at Keeneland on April 7. However, the second through sixth place finishers (in order of finish) -- Classy Act, Wonder Gadot, Patrona Margarita, Testing One Two, and She’s A Julie -- all return for another crack at some coveted points. Classy Act has been installed as the morning line favorite, while Eskimo Kisses is an interesting new shooter for trainer Kenny McPeek. Both Fair Grounds races will offer points on a 100-40-20-10 scale.

On Sunday, the Derby and Oaks trails shift focus West to Sunland Park for the Sunland Park Oaks and the Grade 3 Sunland Derby. The Oaks drew a small field of five with Blamed as the heavy favorite. The daughter of Blame has won four straight, including two stakes races at Sunland Park, where she is undefeated. Regular rider Ken Tohill will send her straight for the lead from post four, and she has shown in her last four races that once she has the top spot, she does not relinquish it.

All Out Blitz gets class relief in the Sunland Derby but is still the 4-1 lukewarm morning line favorite. He’s faced some good ones in California. Also stepping down is Hollywood Star, who was last seen finishing fourth in the Sam F. Davis (G3). Runaway Ghost enters off a runner-up finish to Reride, who will ship out for the UAE Derby, in the Mine That Bird Derby, the local prep for this event. All in all, it looks like a pretty evenly matched field with colts shipping in out of previous Derby preps looking for a lighter load.

The Player looks like a sure bet in the Grade 2 New Orleans Handicap. He will break from the inside with Calvin Bo-Rail in the irons and will surely be the pace-setter. Good Samaritan makes his 2018 debut in this spot and was last seen finishing second in the Clark Handicap (G1) back in November. He is the morning line favorite, but it will all depend on how fast competitors like Leofric and Han Sense make The Player go.

Synchrony broke Mr. Misunderstood’s five-race winning streak and handed him his first defeat at Fair Grounds when the two last met in the Fair Grounds Handicap (G3). Mr. Misunderstood will attempt to reverse that order of finish when the two meet again in the Grade 2 Muniz Memorial Handicap. Synchrony will break from the rail while Mr. Misunderstood breaks from post eight. Forge, who most recently finished second to champ World Approval in the Tampa Bay Stakes (G3), joins the field, as does Ring Weekend. There are a total of eleven going to post in this 9 furlong contest.

Impact Player the one to beat in Gulfstream's Hutcheson

Trained by none other than Todd Pletcher, Impact Player enters the Grade 3 Hutcheson Stakes on a two-race winning streak. He really took to the Gulfstream Park track after beginning his career in New York. He will be the speed from the rail but will likely have immediate company from Belle Tapisserie from post two. Tricks to Doo may also be part of that early pace. With only six in the field, this will be rider’s race. Post time is 5:44 p.m.

Away from the big girls, Paradise Woods should shine

Dual Grade 1 winner Paradise Woods was up against it in her last two races, running third in the Breeders’ Cup Distaff (G1) behind Forever Unbridled and Abel Tasman and then second behind champ Unique Bella in the La Brea (G1). She gets class relief while making her 2018 bow in the Grade 2 Santa Monica Stakes. Skye Diamonds and Selcourt will make her work for it, however. Selcourt most recently bested Skye Diamonds, who was third, in the Las Flores (G3). Both mares are in good form and like the Santa Anita track. Post time is 5 p.m. Saturday.

So far, French-bred Itsinthepost has had a banner year. He is 2-for-2 so far and had a career best race last out in the San Marcos (G2) when he narrowly held off Hayabusa One’s stretch drive. Victor Espinoza, who was aboard Hayabusa One (FR), did lose his whip in the stretch. Whether that cost the duo the race, we’ll never know, but do not let that detract from the class Itsinthepost exhibited. Those two will tango again when they meet in the Grade 2 San Luis Rey Stakes, an event Itsinthepost won by one length last year. Also of note is Responsibleforlove, the lone mare in the race. She has been competitive since moving to the U.S. She has not won a graded event yet but she is multiple graded stakes placed and could have a say at the 12-furlong distance. Post time is at 7 p.m. Saturday.