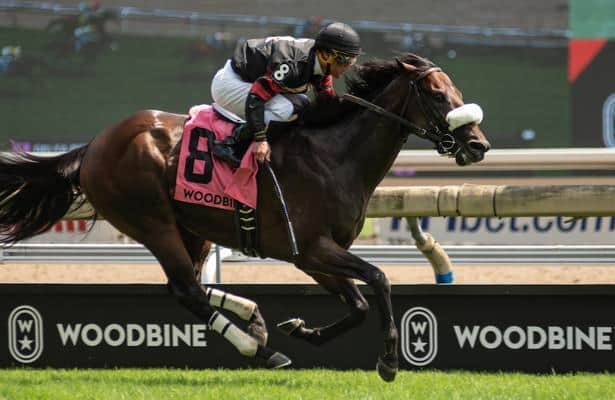 Each weekend, Horse Racing Nation previews the top races to tune into coast to coast and runs down the main contenders. Post times are all in Eastern Time. This edition covers Saturday's races.

Delta Prince could get his moment at Woodbine

Regally bred Delta Prince seems to finally be coming into his own, winning the King Edward (G2) before narrowly missing in the Fourstardave Handicap (G1). He will break as the morning line favorite in the Grade 1 Woodbine Mile, which offers a fees paid automatic berth to the Breeders’ Cup Mile. Classy Oscar Performance will attempt to get back on track after getting pulled up and vanned off in the Arlington Million (G1) last month. Also looking to return to the winner’s circle is Arlington Handicap (G3) winner Divisidero. Group one placed Lord Glitters (FR) and Stormy Antarctic (GB) will be making their North American debuts, while Good Samaritan gets back to the turf at a track where he's won on grass earlier in his career.

It’ll likely be the Chad Brown show in the Grade 2 Canadian Stakes with Inflexibility Stakes with  and New Money Honey topping the field. Inflexibility was a close up fifth in the Beverly D. (G1) last out while New Money Honey was a close sixth in the Diana (G1) in her last race. Flaming Page winner Daring Duchess will break from the rail and will likely try to take the field from start to finish. Inflexibility could challenge for that lead, but I think Niigon’s Eclipse is more likely to gun for the front.

Canadian Horse of the Year Pink Lloyd is the even money favorite to win the Grade 3 Bold Venture Stakes. Despite consistently finding trouble, the 6-year old gelding sports an impressive 19: 16-1-1 career record, with every start taking place at Woodbine. He will carry high weight of 125 pounds. For those of you playing verticals, Pink Lloyd presents a solid opportunity to single and move on. If you’re not a fan of British rock, Kingsport, the only horse in the last year to beat Pink Lloyd, offers a nice alternative.

Globetrotting, Group 1 winner Hawkbill will go favored in the Grade 1 Northern Dancer Turf Stakes. Graham Motion has two solid shots to win in group one winner Mekhtaal and Sky Classic (G2) winner Utmost. 2017 Northern Dancer Turf winner Johnny Bear will defend his title despite not winning a race since. Nijinsky (G2) winner Tiz a Slam also has a solid chance in the 1 ½-mile affair and will likely contend with Utmost for the early lead.

Breeders’ Cup berths, Derby/Oaks points on the line at Churchill

Locally Owned, the first offspring from Grade 2 winner and Grade 1 placed Fiftyshadesofhay, will debut in Race 7, a six-furlong maiden special weight, at Churchill Downs for trainer Albert Stall. The 2-year old Distorted Humor colt will face 11 rivals and will break from the far outside post as the 4-1 morning line favorite. Only the D. Wayne Lukas-trained Pantherus Leo, who will exit the rail position, has previous race day experience, running ninth throughout in his debut. Locally Owned has displayed a consistent breeze pattern for Stall, who has strong winning percentages for the distance/surface, first timer, 2-year olds, and maiden special weights. Also in the field is Tom, a full brother to 2017 Preakness hero Cloud Computing. The colt is in the care of Brian House, who also has turned in strong percentages in same categories as Stall. His last two works have been strong, including a second back bullet breeze.

Blue Prize tops the Grade 3 Locust Grove Stakes, carded for 1 1/16-mile for fillies and mares 3-years old and upwards. The Argentinean-bred mare won the Fleur de Lis Handicap (G2) last out and has a trip to the Breeders' Cup Distaff locked up should connections nominate her. Champagne Problems and Pinch Hit, first and third respectively in the Groupie Doll (G3), are both 4-1 shots while stretching out a bit off that mile race. Former Ashland (G1) hero Sailor’s Valentine, who has not won since that signature race is also part of the field.

The 1 1/16-mile Grade 3 Iroquois Stakes offers qualifying points toward the 2019 Kentucky Derby as well as an automatic berth in the Breeders’ Cup Juvenile in the fall. Saratoga Special (G2) runner-up Tight Ten tops the field of 12 as the 2-1 favorite. The Tapit colt has run into trouble in both career starts and could be a runaway winner for trainer Steve Asmussen if he can get out of his own way. The oddsmaker seems to believe Tight Ten stands quite a bit above the rest as the second choice is 6-1 Tobacco Road, winner of the Ellis Park Juvenile Stakes.

The Ellis Park juvenile races are key here, as Ellis Park Debutante winner Serengeti Empress is the favorite in the Grade 2 Pocahontas Stakes. Similar to its counterpart for the colts, the Pocahontas will offer 2019 Kentucky Oaks points as well as an automatic berth in the Breeders’ Cup Juvenile Fillies. Trained by Thomas Amoss, Serengeti Empress will break from the rail. Maiden winners Splashy Kisses, Two Dozen Roses, and It Justhitthe Wire are the next choices on the morning line, followed by undefeated, dual surface stakes winner Taylor’s Spirit.

The French invade for the Sands Point

The featured Grade 2 Sands Point Stakes at Belmont Park drew a field of eight 3-year old fillies, with three of the entrants being French invaders. As is typical, trainer Chad Brown will send out two of the top three morning line favorites: Barkaa and Reversethedecision. Barkaa will be making her U.S. debut and was last seen finishing fifth and ninth, respectivel, in group one stakes in France. Those results do not sound great, but she was not beaten by much in either of those events. On the other hand, Reversethedecision won an allowance at the Sands Point distance of nine furlongs last out. Lake Placid (G2) runner-up Capla Temptress will continue to try to move forward for new trainer Bill Mott. Like Barkaa, Victorine will be making her U.S. debut, and trainer Graham Motion will send out 6-1 shot Colonia and 5-1 Pucker Up (G3) winner Secret Message. Barkaa is the 3-1 lukewarm first choice, making this a fairly even field. Post time is 5:53 p.m.