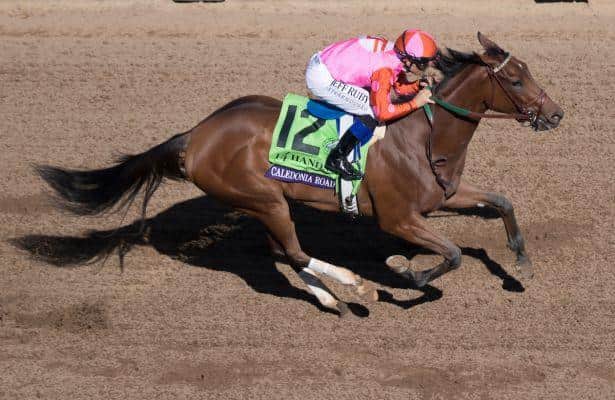 With the Kentucky Derby and Kentucky Oaks just a week away, action in the afternoon this weekend is lacking. Still, Santa Anita Park hosts the trio of graded stakes, while both Belmont Park and Churchill Downs commence their meets. To add, 2-year-old champion filly Caledonia Road kicks off her year in an easy spot at Belmont, while down at Gulfstream Park, trainer Todd Pletcher will unveil an exciting 3-year old.

Get all the highlights here with post times in Eastern Standard Time:

A Group 1 winner at Royal Ascot in his prime, Undrafted is set to begin his year in the Elusive Quality Stakes at Belmont Park. While he never made it to that level last year, he still posted triple-digit Equibase Speed figures in every start. He has fired off two consecutive bullet works in his final preparations for this race for trainer Wesley Ward. He will face nine others, including tepid morning line favorite Commute. The Mark Casse trainee was gelded prior to his seasonal debut but caught soft turf at Keeneland. Both seem ready to roll. Post time is at 5:50 p.m.

All three of this weekend’s graded stakes will be hosted by Santa Anita Park. The Grade 3 Santa Barbara Stakes at 1 1/2 miles drew a field of six headed by Plein Air. The 5-year old Manduro mare made her stateside debut a winning one back in January, taking the 12-furlong Astra stakes by 3/4 of a length. She began her career in Italy but is now trained by Bob Baffert for Sunny Brook Stables.

The Grade 2 Californian Stakes also attracted a field of six. For a race that has previously brought out some solid runners, this year’s edition came up quite light. Santana Mile winner Dr. Dorr is the prohibitive favorite for trainer Bob Baffert. The gelded son of Lookin At Lucky is 4-for-6 at Santa Anita and has been working nicely leading up to this. Santana Mile runner up The Lieutenant will take another crack at Dr. Dorr, and veteran Soi Phet will try to build off his second place finish last month in his season debut.

Sunday’s Grade 3 San Simeon Stakes for 3-year olds and upward drew an interesting field of eight. Conquest Tsunami will be the heavy favorite off his third-place finish in the Al Quoz Sprint (G1) last month in Dubai. He drew the rail and will likely gun for the lead. Directly to his outside is the trio of mares, something you do not often see in the U.S. Both Coniah and Belvoir Bay like the downhill course at Santa Anita and the 6 1/2-furlong distance and should both have a very good shot to win.

Caledonia Road gets back to work

Lightly raced Caledonia Road ended 2017 with a bang. The Quality Road filly upset the Breeders’ Cup Juvenile Fillies (G1) at odds of 17-1 and was subsequently named Champion 2-Year Old Filly. She has not raced since due to having a small ankle chip removed but will make her 2018 debut in Belmont’s third race on Sunday. Despite facing her elders in this one-mile allowance spot, the filly looks well-spotted for trainer Ralph Nicks as the field only drew four other runners. This should bring her along nicely for her next anticipated start, the Grade 1 Acorn Stakes on June 9. Post time is at 2:37 p.m

Champion's half-brother to be unveiled

Wooderson, the 3-year old Awesome Again half-brother to champion Rachel Alexandra, is set to make his racing debut for trainer Todd Pletcher and owner Let’s Go Stable on Sunday in Gulfstream Park’s 10th race. The colt was a $400,000 yearling purchase for his connections and has been steadily working at Palm Beach Downs. None of his works have been particularly fast, but Pletcher is top notch at preparing and placing his charges. Post time is at 6:03 p.m.