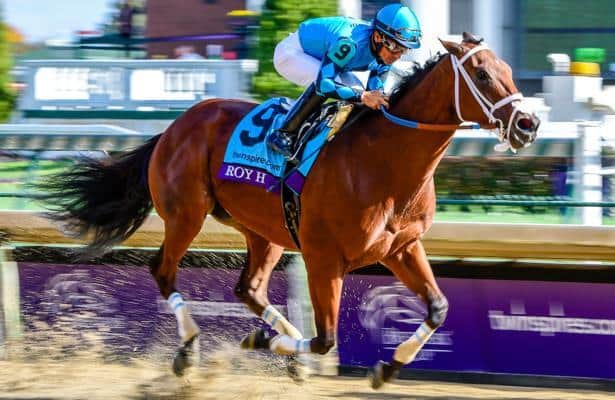 Last year’s Tom Fool (G3) winner Skyler’s Scramjet will kick off his 2019 campaign in the Grade 3 Toboggan Stakes at Aqueduct. That also marked his last win, but he remained extremely competitive throughout the rest of 2018. He will carry the high weight of 124 pounds, conceding six pounds to his biggest threat, Gold for the King. Skyler’s Scramjet will exit post two while Gold for the King drew the rail. Three others complete the field, including stakes winner Colonel Sharp. Post time is 2:26 p.m.

Honorable Duty is the one to beat in the Louisiana Stakes. Now 7, the gelding is a perfect 3-for-3 over the main track. He had an abbreviated campaign last year, making just four starts, all at Churchill Downs, and ended the season by being pulled up and vanned off in the Marathon (G2) in November. He drew the far outside post in the field of seven. On the rail is last year’s Risen Star (G2) runner-up Snapper Sinclair. He will likely break running and try to take the field as far as he can. Harlan Punch, who drew post two, will go with him. Three others are pace-setting types, so the set-up looks favorable for late running Hawaakom and Honorable Duty.

The Colonel E. R. Bradley Handicap attracted a field of nine topped by 2-1 favorite Great Wide Open. The 7-year old gelding loves the 8 ½-furlong distance and relishes the surface of the Fair Grounds lawn. With James Graham in the irons, the Irish-bred will likely zip to the lead from post eight. First Premio drops out of the King Edward (G2) and will be making his first start since that race back in June. He will likely sit just off the pace and be one of the first challengers in the stretch.

The Silverbulletday drew an interesting cast led by Golden Rod (G2) winner Liora. The Candy Ride filly drew post four and is a speedy type. She also appears to be versatile, winning races on both a fast and a sloppy track. Needs Supervision posted a huge Equibase speed figure in her 2018 finale, winning going away at long odds. As with Liora, Needs Supervision is front-running type. Cowgirls Like Us is the most experienced in the field having made six starts. She enters the Silverbulletday on a three race win streak, all in stakes events. Four others complete the field.

For a close look at the Lecomte Stakes (G2), a points-paying Kentucky Derby prep, check out my Head to Head handicapping.

The Sunshine Millions series for Florida-breds is comprised of four different events this year spaced out throughout the day. Classy X Y Jet will begin his year in the Sunshine Millions Sprint. The 3-5 favorite will be attempting to notch his third win in this event before heading to the desert to try to get the Dubai Golden Shaheen (G1) monkey off his back. Though he’s been off since June, he’s been training well for Jorge Navarro, including two bullet breezes in his last two recorded outings.

Big Changes will be looking for the winner’s circle after finishing second in his last starts. Though he is cross-entered in the Colonel E. R. Bradley, he will scratch from that spot in lieu of an easier 2019 start in the Sunshine Millions Turf. His biggest win threat looks to be the front-running Class and Cash, who missed by a nose in the Millions Turf Preview in November. Those two will likely duke it out on the front end.

Starship Jubilee is the 9-5 favorite in the Sunshine Millions Filly and Mare Turf despite drawing the outside post in the field of 13. The graded stakes winner steps up out of the Claiming Crown Tiara in which she finished fourth as the heavy favorite. The 6-year old mare is adept at both the distance and over the Gulfstream lawn.

The Sunshine Millions Classic drew a field of eight, and in typical fashion, favored Souper Tapit drew the outside post. The 5-year old finished 2018 strongly, winning a one-mile optional claimer by nine lengths. He will have to get past Millions Classic Preview winner Mr. Jordan along with the more experienced Dalmore and Forevamo.

Two-time Breeders’ Cup Sprint winner and likely repeat Eclipse Award champion Roy H will be heavily favored to win his 2019 debut, the Grade 2 Palos Verdes Stakes at Santa Anita. The 7-year old gelding won this event last year and went on to have a stellar 2018 campaign. Conquest Tsunami will join his Peter Miller-trained stablemate in the gate. Also 7 years old, Conquest Tsunami knocked the rust off with a third place finish in the Hernandez (G3) on New Year’s Day. Both Miller trainees like to set the pace, so it’ll be interesting to see how the race unfolds. A speed duel between these two would set things up for a late runner like Kanthaka, who drops in out of the Malibu (G1). Post time is 7:04 p.m.