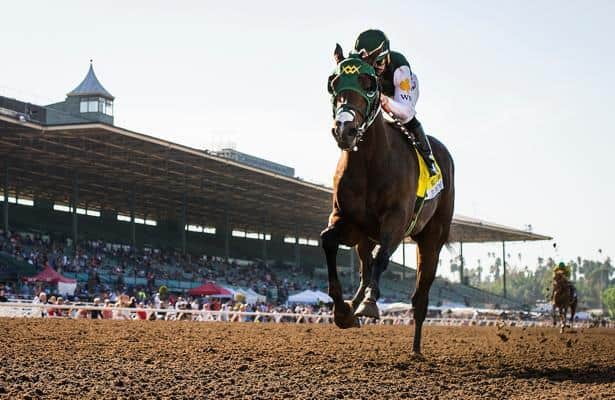 Both Santa Anita Park and Tampa Bay Downs offer up a nice selection of stakes action to complement their respective 2018 Kentucky Derby preps. Aqueduct is also playing host to a top test for the 3-year-olds along with a couple other stakes, and Oaklawn Park presents the sole Kentucky Oaks prep of the weekend.

Of course, it all leads up to Bolt d'Oro's much-awaited return, in which all eyes will be on the multiple Grade 1 winner after champion Good Magic failed as the favorite in last weekend's Fountain of Youth.

Here's a glance at the weekend's major races, with times listed in Eastern Standard.

This weekend features three Kentucky Derby preps and one for the Oaks, with the big draw being the return of Bolt d’Oro in the Grade 2 San Felipe Stakes at Santa Anita. The race drew a field of eight with Bolt d’Oro’s main competition coming from the undefeated McKinzie. Also in the race are winners of the Robert B. Lewis (G3) in Lombo and San Vicente (G2) in Kanthaka. If the track comes up sloppy, Bolt d’Oro may not run, while trainer Bob Baffert has indicated that McKinzie will head postward no matter the weather or track condition.

Over on the East Coast, featured are the Grade 3 Gotham Stakes at Aqueduct and the Grade 2 Tampa Bay Derby at Tampa Bay Downs. Enticed and Free Drop Billy cross-entered both races but were able to catch a rescheduled flight to New York and will run in the Gotham. Also on that flight North were Cove Blue and Whereshetoldmetogo, both of whom will also run in the Gotham. Firenze Fire continues on the Aqueduct Road to the Kentucky Derby and will try to improve on his runner-up effort in the Withers (G3).

Down in Florida, World of Trouble, impressive runaway winner of the Pasco at Tampa Bay Downs in near-track record time, will attempt to stretch his speed to two turns in the Tampa Bay Derby. There he will face Sam F. Davis (G3) winner Flameaway as well as third-place finisher Vino Rosso and Holy Bull (G2) third place finisher Tiz Mischief.

Oaklawn Park carded its featured the Grade 3 Honeybee Stakes. While perhaps none in the field are considered top Oaks prospects at this time, the race did come up competitive. The top three from the Martha Washington are back plus Silverbulletday winner Stronger Than Ever, who is off Lasix for this race, and undefeated Dixie Belle winner Amy’s Challenge will receive her biggest test yet.

A trio of Grade 1 races surround the San Felipe

While a good bit of the focus at Santa Anita will be on Bolt d’Oro’s return on Saturday, there is plenty more to look forward to. City of Light, who concluded 2017 with a win in the Malibu (G1), headlines the Grade 1 Triple Bend Handicap. Malibu runner-up Edwards Going Left returns to take another crack at City of Light. Captain Scotty could be any kind of freak, and Bobby Abu Dhabi ended 2017 stronger than ever.

The Grade 1 Frank E. Kilroe Mile completes the trio of grade ones. Champion World Approval is the heavy 4-5 morning line favorite and towers over the rest of the field. Bowies Hero and Om could provide some competition, but neither are really in the same league as the champ.

La Coronel, Daddys Lil Darling, and Off Limits face off

The Grade 2 Hillsborough Stakes, on the Tampa Bay Derby undercard, drew a loaded field, including Grade 1 winners La Coronel, Daddys Lil Darling, and Off Limits. The trio have a combined total earnings of over $2.5 million. Graded stakes winners Fourstar Crook, Lovely Bernadette, and Proctor’s Edge are also part of the field.

Gidu (IRE) headlines Tampa Bay Downs' Columbia, while War Story takes a significant class drop in the Challenger. The Grade 3 Florida Oaks on the turf, meanwhile, drew an international cast. Beckoning (IRE) and Goodthingstaketime (IRE) are in from Ireland, Altea (FR) and Salsa Bella (FR) began their careers in France, and Closer Still (IRE) hopped the border from Canada. Altea (FR) has been installed as the lukewarm 7-2 morning line favorite.

Last seen finishing eighth in the Breeders’ Cup Sprint (G1), Whitmore will begin his year in the Hot Springs Stakes. He has never been out of the trifecta at Oaklawn Park and has only been out of the trifecta at the six-furlong distance once. Oaklawn sprint stalwart Ivan Fallunovalot and Wilbo, who defeated that one in their last two starts, will line up to take on the multiple graded stakes winner. A solid effort here could put Whitmore squarely amongst the best sprinters in the nation as he moves forward throughout the year. Post time is at 4:39 p.m.

Multiple graded stakes winner Highway Star will try to get back to her winning ways in the Heavenly Prize Invitational. The New York-bred mare has just one loss at Aqueduct and just one race where she was out of the exacta at the mile distance. Divine Miss Grey, Frost Wise, Boule and Holiday Disguise are all legitimate threats to Highway Star as all like both the track and the distance.

Also on the Gotham card is the Grade 3 Tom Fool Handicap. The race drew a field of ten with Do Share carrying the high weight of 120 pounds. Veteran Green Gratto breaks from the rail, and the other talent includes Salvatore Mile (G3) winner Classy Class, Toboggan (G3) winner Great Stuff, multiple graded stakes placed Threefiveindia, among others.

Justify wowed race fans with his front-running debut victory last month. Trained by none other than Bob Baffert, the Scat Daddy colt ran seven furlongs in 1:21.86 and won by 9 1/2 lengths as the heavy favorite. He makes his second career start in Sunday’s fifth race at Santa Anita, a one-mile, first level allowance event. He stands tall in this field, and another convincing win could put him on the Kentucky Derby trail. Post time is at 4:30 p.m.

Baffert is trying something new with Masochistic in an apparent attempt to get him back to the winner’s circle. The 8-year old gelding has not won since capturing the Pat O’Brien (G2) in August 2016. To be fair, he’s also only raced three times since then, twice in 2017 and once this year. His one start this year, his first in nearly nine months, resulted in a fifth place finish in state-bred company. Prior to this coming weekend, Masochistic has raced exclusively on dirt. That will change, however, when he lines up against a full field in Sunday's Sensational Star Stakes, a 6 ½-furlong affair on Santa Anita’s downhill turf course for California-breds. Post time is at 6 p.m.