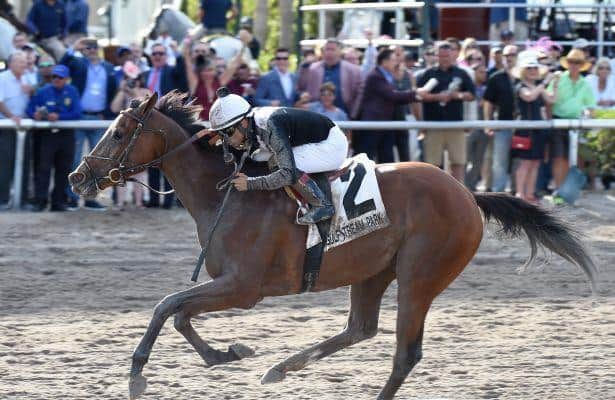 Another big weekend of racing means another two-part Weekend Watch, with most of the action coming to you from Pimlico Race Course in Baltimore, home of the 2018 Preakness Stakes. Before we can get to Saturday's card, however, we'll enjoy a Friday afternoon featuring the fillies' companion race, the Black-Eyed Susan. As an added bonus, this year’s winning owners of the Black-Eyed Susan will receive a free season with multiple Grade 1 winner Point of Entry, and the winning owners of the Miss Preakness will receive a free season with Breeders’ Cup Classic winner Mucho Macho Man.

Read on to catch all of Friday’s highlights with post times in Eastern Standard.

The Skipat Stakes at six furlongs might have drawn a small field, but it is a competitive one nonetheless. Cairenn, who will break from the rail, has been in fine form this year, tallying two wins and two places in four starts. The Linda Rice-trained Startwithsilver is another on a roll, having earned three wins and a show from four starts in 2018. Ms Locust Point reeled off two straight stakes victories, one of them graded, to begin her year but was most recently eighth in the Madison (G1), albeit beaten by only 4 ¾-lengths. Vertical Oak won the Prioress (G2) back in September but finished a tiring third in her seasonal bow last month. That did come on a sloppy track, though, and the Giant Oak filly has the advantage of having already raced at and won at Pimlico, annexing last year’s Miss Preakness (G3). Four other fillies and mares fill out the field. Post time is 1:34 p.m.

Happy Like a Fool may be the big name in the Grade 3 Miss Preakness Stakes, but she was not made the morning line favorite of the field of 10. That honor went to undefeated Good Move, but at 3-1 she is far from an overwhelming foe. Also undefeated is the John Sadler-trained Artistic Diva, who has victories on both dirt and turf. Those three are joined by Cicada winner Lezendary, dual stakes winner Almond Roca, and three-time stakes winner Limited View. There are quite a few front-running types in this field, which could actually set things up quite well for a runner like Bootsy’s Hadenough. Post time is at 2:39 p.m.

Looking for a good betting race? The Grade 3 Pimlico Special is certainly just that. Your morning line favorite, Irish War Cry, is a tepid 3-1 favorite, and a bad one at that. The Curlin colt hasn’t won since taking down the Wood Memorial (G2) last year and was actually eased in his most recent race after giving jockey Jose Ortiz no response when asked to run. The Todd Pletcher-trained One Liner is sure to take some money and has just one career defeat, which came against the likes of Conquest Windycity and Mind Your Biscuits. Essex Handicap winner Hedge Fund looks good, too, but the race really seems to set up for late runners Something Awesome, winner of three straight stakes, and Rated R Superstar, winner of the Ben Ali (G3) in his most recent start. Post time is at 3:43 p.m.

Hogy and Imprimis set to clash in Jim McKay

Hogy has been a turf sprinting stalwart for quite a few years now. The 9-year old gelding is 11: 7-2-0 at the five-furlong Jim McKay Turf Sprint distance, but up-and-coming Imprimis is 3-for-3 in just three career starts, too. All three of those races were at Gulfstream, but the 4-year old gelding earned increasingly better speed figures in each race. Rocket Heat and Oak Bluffs have both been in good form lately, and Vici could be a nice upset selection. Post time is 4:14 p.m.

In what seems to be the trend for Pimlico’s Friday card, Coach Rocks is an underwhelming favorite in the Grade 2 Black-Eyed Susan Stakes. The Gulfstream Park Oaks (G2) winner was installed as the 7-2 morning line leader over Busher winner Midnight Disguise, Martha Washington victoress Red Ruby, Suncoast winner C. S. Incharge, undefeated Goodonehoney, and Gazelle (G2) runner-up Sara Street. Any of those fillies could conceivably take home the trophy, but Midnight Disguise is the only filly with a prior win at the race distance of 1 1/8-miles. Post time is for the nine furlong event is 4:48 p.m.

Hilltop field will be hard-pressed to beat Thewayiam

Exotics players, here is your vertical single. On a card with tepid and false favorites, save yourself some money in the Hilltop Stakes by singling Thewayiam going a mile on turf. She is easily the class of the field, being the only stakes winner, let alone graded stakes winner, to enter. Aside from that, this is a class drop for a filly that last finished a close second to Breeders’ Cup Juvenile Turf Fillies winner Rushing Fall. Post time for the one mile turf event is 5:25 p.m.

Blue Prize, Verve’s Tale and Fuhriously Kissed have all met before and will do so once again in the Grade 3 DuPont Distaff Stakes. Despite losing to Blue Prize last out, Verve’s Tale has been named the 9-5 morning line favorite with Blue Prize the 2-1 second choice. Fuhriously Kissed is the 5-1 third choice. Doubledogdare (G3) third place finisher Song of Spring also has a shot in this, but the rest of the field is at double digit odds. Post time is 5:57 p.m.