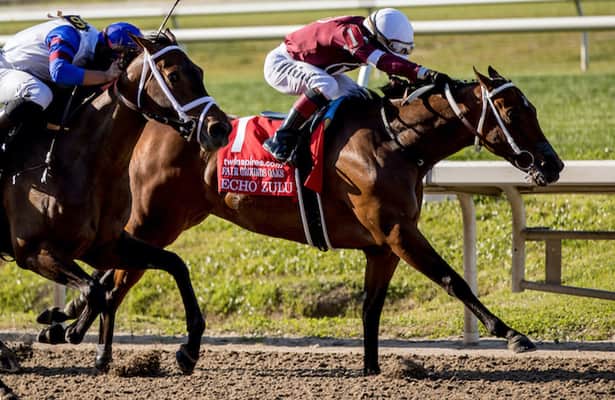 Echo Zulu was last seen finishing fourth in the Kentucky Oaks in May. Under Joel Rosario, Echo Zulu pressed pacesetter Yuugiri through punishing fractions of 22.45 seconds, 46.51 and 1:11.44. In the turn, Yuugiri gave way while Secret Oath came roaring up the outside. Turning for home, Echo Zulu briefly came away with the lead, but after being a part of that hot early pace, she had nothing left to fend off Secret Oath’s powerful run.

Steve Asmussen gave his filly much-deserved time off after her unsuccessful trip to Churchill Downs. She even exited the work tab from June 6 to Aug. 16. Upon her return to the work tab on Aug. 17, she put in a couple easy four-furlong moves, nothing at all flashy. She has strung together another three works in preparation for this spot, including a bullet five-furlong work on Sept. 16.

In terms of speed figures, Echo Zulu has been about as consistent as they come. Her lowest figure came two starts back when she won the Fair Grounds Oaks (G2) by a nose and was awarded a 90 Beyer Speed Figure. She’s earned two triple-digit figures so far, a 103 Beyer when running her rivals off their hooves in the Breeders’ Cup Juvenile Fillies and a 100 when fourth in the Kentucky Oaks, giving her the highest speed figure in the Dogwood field.

Chief among Echo Zulu’s rivals is Wicked Halo, another daughter of the hot Gun Runner. Also trained by Steve Asmussen, Wicked Halo took a few steps along the Kentucky Oaks trail but has stuck to sprints, the exception being when she won the one-mile Tepin Stakes at Churchill Downs. She has never been worse than fourth in her career and enters the Dogwood on a three-race win streak, including the Prioress (G2) at Saratoga earlier this month. She earned a career high 102 Beyer, putting her on the same level as Echo Zulu.

Also on a three-race win streak is Last Leaf. A daughter of Not This Time, Last Leaf is a stakes winner on turf and dirt, and her last three races were on the dirt. She earned a career high 91 Beyer for her victory in the Audubon Oaks last out, so she’ll need to take a step forward to keep up with the Asmussen fillies.

A familiar face to Echo Zulu lines up to challenge the champion for the third time in their careers. Tarabi, a daughter of First Samurai, was a distant second behind Echo Zulu in the Spinaway (G1) and a distant third to that one in the Breeders’ Cup Juvenile Fillies (G1). She took seven months off, finishing second in an optional claimer when she returned in June. She followed that up in the Wilton Stakes at Saratoga with a win over Goddess of Fire, who goes next in the Cotillion (G1) this weekend.

Echo Zulu drew the rail and should have no problems with the cutback in distance. Expect for her to go straight out for the lead, where she should have company from stakes-placed Chasing Fireflies. Wicked Halo, Last Leaf and Tarabi should take up position right behind that duo. The key for any of them will be to not let Echo Zulu get loose on the lead. But even if the pace is fast, the cutback to seven furlongs from nine furlongs will be in the filly’s favor.

Colorful Mischief and Gunning complete the field. The Dogwood is the ninth race on the card and is scheduled to go to post at 10:11 EDT.