Rich Strike is the real deal ... at Churchill Downs 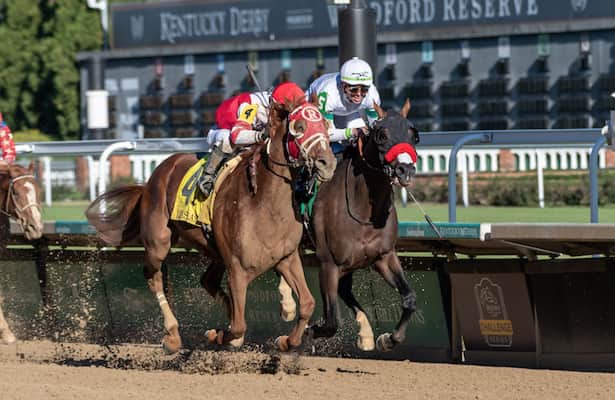 A lot can be and has been said about Saturday’s Grade 2 Lukas Classic. At the top of the heap is the question concerning whether Sonny Leon’s saddle really slipped. Going hand-in-hand with that is the speculation that, if the saddle did indeed slip, was it because Leon was trying to elbow Tyler Gaffalione off his mount?

Then there’s the fact that Happy Saver had to check out of contention in the stretch. But the biggest takeaway here is that Rich Strike is indeed a one-track pony.

Coming into the Lukas Classic, Rich Strike had two wins to his name: a victory in his dirt debut and his shocking upset in this year’s Kentucky Derby (G1). The commonality between the two races is that they both took place at Churchill Downs. At all other tracks, the son of Keen Ice is 8: 0-0-3.

In the Lukas Classic, Rich Strike uncharacteristically raced outside horses and closer to the front, settling in fourth. At the top of the stretch, Leon and Rich Strike took dead aim at the dueling leaders, Hot Rod Charlie and Art Collector. Matching him stride for stride was Happy Saver to his inside. As Rich Strike moved to engage Hot Rod Charlie, Happy Saver was forced back because of tight quarters.

From there, it was a two-horse race as Rich Strike made the lead. Hot Rod Charlie wasn’t done, yet, however. Racing shoulder to shoulder, the older Hot Rod Charlie dug in and battled back, getting his nose down on the wire first.

Both Hot Rod Charlie and Rich Strike ran winning races, and neither deserved to lose. And although Rich Strike did indeed lose the photo, he also proved once again just how much he relishes the Kentucky track.

With no Hot Rod Charlie in the field, Rich Strike wins the race. A case also can be made that if Leon’s saddle did not slip, then Rich Strike would have won. Regardless of those two hypotheticals, Rich Strike ran the best race we have seen from him since the Kentucky Derby.

Being a horse-for-course takes nothing away from the colt. And if he is going to prefer one track, Churchill Downs is not a bad way to go as there are quite a few big races open to him going forward.

Unfortunately, neither this year’s nor next year’s Breeders’ Cup Championships will be held at Churchill Downs. It is possible that the event will be hosted under the Twin Spires in 2024, but for now, a Breeders’ Cup Classic victory looks to be out of the cards for the Derby winner.