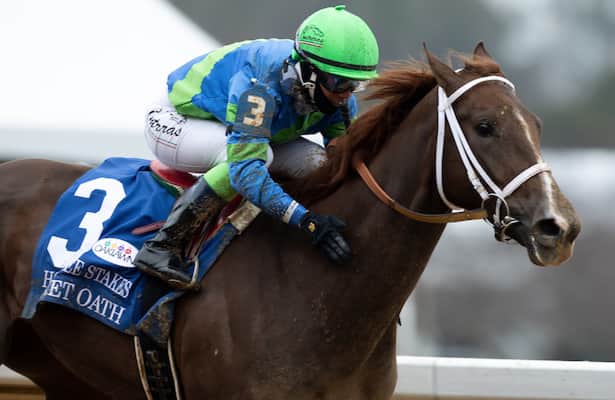 With Secret Oath’s string of four straight losses, many are beginning to wonder whether her best races are behind her.

It isn’t like she has run horribly. A fourth in the Preakness against the boys, two seconds to Nest in the CCA Oaks (G1) and Alabama (G1), and a third in this past weekend’s Cotillion (G1) is nothing to sneeze at. She is showing up and cashing checks, but I believe it is fair to say that fans miss the brilliance that brought her Kentucky Oaks glory.

Let’s backtrack a bit. Secret Oath kicked off her career last October with a third place at long odds in a race in which she was toward the inside and got shuffled back but kept trying anyway.

Things came together for her in her second start. She raced three wide but powered away in the stretch to win while being wrapped up. But then the Golden Rod (G2) did not go so well for the daughter of Arrogate. She sat a good trip but simply came up empty, finishing fifth, 11 1/4 lengths behind the winner. All three of those races were held at Churchill Downs in the span of eight weeks.

D. Wayne Lukas next shipped Secret Oath to Oaklawn, where a drop into allowance company resulted in an easy win over none other than Matareya, who would go on to win three straight graded stakes, culminating in the Acorn (G1). Secret Oath next won the Martha Washington by open lengths as the odds-on favorite. The Honeybee (G3) was next on the docket, and the filly once again won in facile style.

Not one to duck a challenge, Lukas tried his filly against the boys in the Arkansas Derby (G1). Secret Oath turned in an admirable performance, finishing third and just 3 1/2 lengths behind Cyberknife, who went on to win the Haskell (G1). That set her up perfectly for a career-defining (for now) victory in the Kentucky Oaks. Two weeks later, Secret Oath entered the gate at Pimlico and took on colts again, this time finishing fourth in the Preakness.

With the three races she has contested since the Preakness, all Grade 1s, it is safe to say that Secret Oath has danced every dance. It is now late September, and she has raced 12 times. Her longest “break” was the two months between the Preakness at Pimlico and the Coaching Club American Oaks (G1) at Saratoga. If you’re keeping up, that’s 12 races over five tracks. Compare that to Flightline’s career, and it’s easy to see how it’s about time Secret Oath received a much-deserved rest.

Lukas has indicated that Secret Oath will point to the Breeders’ Cup Distaff, a little more than a month from now. With the depth of the expected field and Secret Oath not firing her best shots, perhaps Lukas should skip the year end championships and send his filly off for some R&R. Bring her back fresh next year as a 4-year old to prove that her best races are not, in fact, behind her. She’s immensely talented, but even the stars need time away.