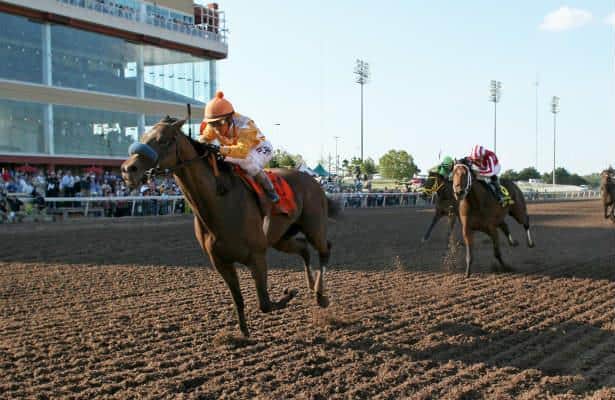 If Best Actor is a name you’re unfamiliar with, don’t feel bad. The lightly raced son of Flatter will be making just his fifth career start for owners Gary and Mary West and trainer Brad Cox on Sunday when he faces seven challengers in the $400,000 Grade 3 Oklahoma Derby. It will be contested at 1 1/8-mile.

Best Actor did not race as a juvenile, rather making his debut back in April at Oaklawn Park. With Ricardo Santana, Jr. aboard, the colt broke from post eight and went straight to the lead. Despite being pressured every step of the way, Best Actor finally drew away in the stretch to win by 1 ¾-lengths. The final time for the 1 1/16-mile race was 1:44.18 on a sealed, sloppy track. He earned a 90 Beyer Speed Figure for the effort.

In his second start, Best Actor, with Santana, Jr. aboard again, utilized different tactics. Breaking from post 11, the colt settled just off the pacesetters and pounced in the far turn. He drew away to win the off-the-turf mile event by four lengths in a final time of 1:34.92 and a BSF of 91.

Best Actor’s third career start came in the Indiana Derby (G3). Straight out of the gate he ran into trouble, stumbling and then being forced inward. He gathered himself up to sit off the pace again. In the stretch, he had advanced into third and had dead aim on the leader Actuator. He inched up on that one and the two brushed in deep stretch with Best Actor unable to get by and having to settle for second. His speed figure once again improved, though, as he came away with a 94.4.

The Cox trainee once again improved speed-figure wise in the Smarty Jones (G3) at Parx. Best Actor bounced away in good order to press the pace from second initially. He took over by the opening half and just increased his advantage from there, pulling away to win by 5 ¾-lengths with a BSF of 96.

Kenny McPeek’s Rattle N Roll appears to be Best Actor’s chief rival. A son of Connect, Rattle N Roll traversed the Derby trail, where he won the Breeders’ Futurity (G1) in his second career start. That was his highlight, though, as he did not find the winner’s circle again until taking the American Derby at Churchill in July. He was then seventh in the Indiana Derby (G3) but bounced back to win the St. Louis Derby at Fanduel Sportsbook and Horse Racing with a career high 100-speed figure.

Two others in with a shot are Steal Sunshine and King Ottoman. Steal Sunshine enters on a three-race win streak, his last two being stakes races. His speed figures have improved in his last four starts culminating with a 97 in the Ellis Park Derby. King Ottoman won the Texas Derby three starts ago and has since finished 3rd in the Indiana Derby (G3) and 5th in the West Virginia Derby (G3) after being squeezed back at the start.

One more to keep an eye on is Great Escape, who has been in good form recently. The son of Midnight Storm was the runner up in both the Derby Trial and the Manitoba Derby at Assiniboia prior to taking the Canadian Derby (G3) at Century Mile.

And if you like Great Escape, Red Knobs is worth a look as a live long shot after beating Great Escape in the Manitoba Derby and finishing second to that one in the Canadian Derby. The son of Union Rags earned a 100-BSF in the Manitoba Derby, the fastest in the field. Previously trained by Dale Romans, Red Knobs’s last two races were under the guidance of new trainer Robertino Diodoro. The 1 ¼-mile of the Canadian Derby may have been outside the colt’s wheelhouse, but he appears to be on the upswing.

Flash of Genius and Big Chopper complete the field. The Oklahoma Derby is the 11th race on Sunday’s card. Post time is 9:14 EDT.