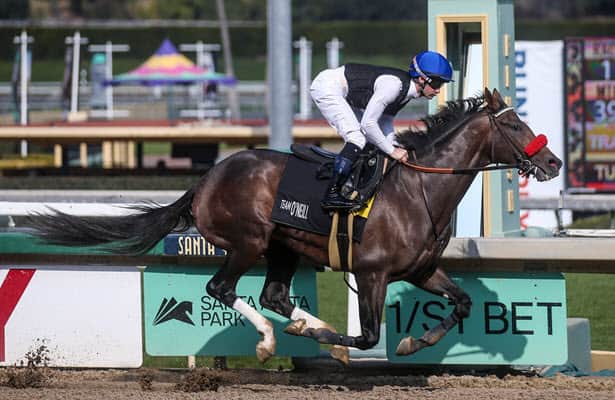 The Grade 2, $500,000 Lukas Classic, contested at 1 1/8 miles, drew a short but solid field of six. Four of the six runners are Grade 1 winners, including this year’s upset winner of the Kentucky Derby, Rich Strike.

Run since 2013, when it was known as the Homecoming Stakes, the Lukas Classic has served as a prep for the Breeders’ Cup. Fort Larned, the winner of the inaugural running of the race, finished fourth in that year’s Breeders’ Cup Classic. Last year, Knicks Go won this event en route to annexing the Classic. Other winners and runners have been also-rans at the championship races.

This originally was slated to be a Head-to-Head piece, but because Hurricane Ian, I have had to proceed solo. Don’t worry – Laurie will be back as soon as conditions in Florida have improved. With that said, let’s take a look at the field.

1. King Fury. King Fury was part of last year’s Road to the Kentucky Derby but did not make the Run for the Roses because of a fever. Since then he was second in the Ohio Derby (G3), third in the Fayette (G2), won the Bourbon Trial and most recently third in the Fort Larned at Churchill Downs in August. He has run in a few other races, but those were his best performances. At Churchill Downs, he has a record of 6: 3-0-1. He has also been lightly raced recently, making only three starts since November of last year. Considering his seeming affinity for Churchill Downs, use underneath.

2. Art Collector. Art Collector has been collecting wins. Last year he strung together three straight wins before finishing sixth in the Breeders’ Cup Classic. He made his 2022 debut in the Saudi Cup (G1), finishing a very disappointing 12th. He rebounded nicely stateside, however, winning the Alydar and the Charles Town Classic (G2) as the odds-on favorite. His last six races have resulted in Brisnet speed figures ranging from 95 to 110, giving him the best dirt speed in the field. This son of Bernardini will go to the lead and dare the others to catch them if they can. His record at Churchill is only 5: 2-0-0, but he’s 7-for-8 at the 1 1/8-mile distance. Win contender.

3. Happy Saver. Happy Saver began his career undefeated in five starts, including the 2020 Jockey Club Gold Cup (G1). He has never been worse than third but has not won since late May 2021. His last six races, all in graded stakes company, resulted in a third in the 2021 JCGC (G1) followed by five straight runner-up efforts. He almost always posts a triple-digit Beyer Speed Figure, but has only managed to finish second in both starts at Churchill Downs. Despite not winning at Churchill, this son of Super Saver is a legitimate win contender based on everything else.

4. Rich Strike. I honestly don’t know what to do with Rich Strike. On one hand, he is undefeated at Churchill Downs, including upsetting this year’s Kentucky Derby. On the other hand, he has not done much of anything else. Aside from his 102 speed figure in the Derby and 104 in the Travers (G1) when finishing fourth, his speed figures have been mediocre. I have consistently said that his Derby win was a fluke, but in this short field and at this venue, you have to play him on top, just in case. With a shot at the upset, definitely exotics.

5. Hot Rod Charlie. Hot Rod Charlie is another cash machine, compiling a career record of 17: 4-5-4. He ran third in last year’s Kentucky Derby, his only start at Churchill Downs. Like Happy Saver, this son of Oxbow almost always posts a triple-digit speed figure. This year he won the Al Maktoum Challenge Round 2 (G2) before finishing second in the Dubai World Cup (G1) and the Salvatore Mile (G3) and third in the Whitney (G1) in his most recent start. He will go with Art Collector early and has the ability to sustain his speed. Win contender.

6. Chess Chief. Six-year old Chess Chief is the salty veteran of the group with 35 career starts. In 12 starts at Churchill Downs, he has managed to go only 0-2-1. Though he routinely competes at the highest levels, he rarely has success. So far this year, Chess Chief has raced five times and hit the board only once. His speed figures are fair to middling. Pass.

With Life Is Good scaring everyone away from the Woodward (G1) at the Belmont at the Big A meet, this race drew a short but competitive field. As much as some people hate it, a very good case can be made for four of the six entrants: Happy Saver, Rich Strike, Hot Rod Charlie and Art Collector. Rich Strike is literally giving me a headache. He hasn’t done much of note before or after the Kentucky Derby, but he quite obviously loves the Churchill track. Just as soon as I dismiss him, he will win.

Art Collector and Hot Rod Charlie are the speed of the race. They’ll both go straight for the front with the others behind them. They both have the class to sustain their speed, so it will be a case of catch them if you can for sure.