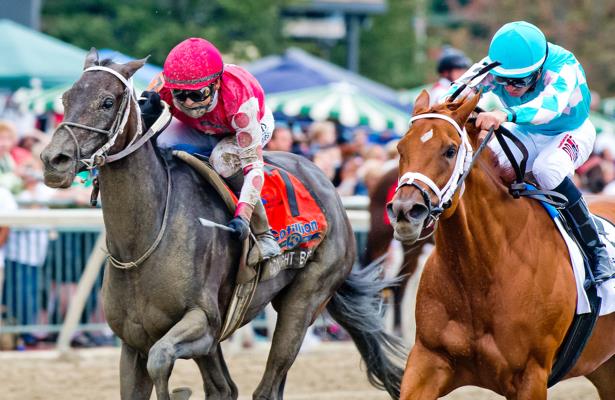 In this time of uncertainty, it is imperative that we keep our spirits up and continue to look toward the future.

With a recent doping scandal and track closures due to the coronavirus pandemic, there's concern over how our beloved sport will survive. Instead of worrying about that which we can do little about now, let’s instead look forward to when our horsemen and fans can get back to the sport and athletes they love best.

This time two years ago, racing saw the emergence of two superstar fillies. And heading into the 2018 Kentucky Oaks, it was a tossup as to which was better: Monomoy Girl or Midnight Bisou?

That question was answered on the first Friday in May by Monomoy Girl, who claimed the lilies en route to a championship-winning season. The one time Midnight Bisou got the better of her then-3-year-old rival was only via disqualification in Parx's Cotillion Stakes (G1).

Monomoy Girl rebounded in the Breeders' Cup Distaff, and the two haven't run into one another since. In the meantime, the balance of power has shifted in this equine rivarly.

Unfortunately, Monomoy Girl missed all of 2019 due to a minor colic surgery last March and then a pulled muscle as the Breeders’ Cup approached. Neither kept her permanently out of commission, much to the relief of her many fans.

Meanwhile, Midnight Bisou made the most of Monomoy Girl’s time away. She positively blossomed as a 4-year old, running her record for the year to 8: 7-1-0, all in graded company. Up until she dropped the Breeders' Cup Distaff, Midnight Bisou was firmly in the hunt for Horse of the Year honors and still took home a much-deserved title as Champion Older Dirt Female.

Could racing's hiatus lead these two back into the same field again?

Midnight Bisou finished a hard-charging second in the inaugural $20 million Saudi Cup in her 5-year-old debut, with only the controversial colt, Maximum Security, beating her to the line in a first go against the boys. Since then, Midnight Bisou has returned to the U.S. and cleared quarantine. Her next race plans are to be determined.

Monomoy Girl has breezed three times at Fair Grounds since returning to the work tab in late February. Given they were easy drills, Oaklawn Park's April 18 Apple Blossom (G1) looks like a longshot.

Perhaps the end of Midnight Bisou's post-Saudi break and Monomoy Girl's slow return to peak fitness will coincide. The connections of Monomoy Girl, after all, have said she's coming back to run at the Grade 1 level or not at all with a promising broodmare career in the offing.

With the talent and heart both these mares have exhibited, I imagine a finish much like we saw with Beholder and Songbird in the 2016 Distaff.  While there is some to fear in these times, there is also so much for which to hope.