Land Over Sea by daylight in Fair Grounds Oaks 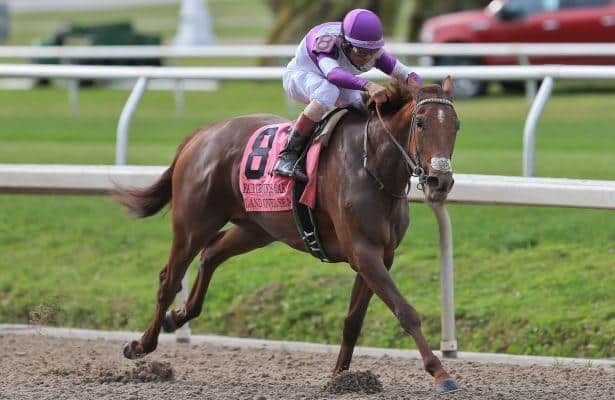 When Songbird is away, Land Over Sea will play. Shipping in to Louisiana from the west coast, Land Over Sea charged late to take over and draw away in the Fair Grounds's daunting stretch to notch a victory in the $400,000 Grade 2 Fair Grounds Oaks.

Local runner Midnight On Oconee won the break and went out to establish her usual spot on the lead. Adore, Northwest Tale and Street Fancy took up position right behind her. Stageplay, Land Over Sea, and Dream Dance comprised the second flight with late-running Venus Valentine spotting the leader 12 lengths.

With Adore hot on her heels, Midnight On Oconee set splits of :23.84, :47.75 and 1:12.70. In the far turn, Adore confronted the pacesetter in earnest and put that one away to take over the lead entering the stretch. Behind her, west coast invader Land Over Sea had advanced into third and Dream Dance had moved into fifth from second to last. Street Fancy was already backpedaling, shortly to be joined at the back of the pack by front-running Midnight On Oconee.

Adore looked home free through the first half of the stretch, but the Fair Grounds's notoriously long stretch ended up being her downfall as Land Over Sea finally hit her best stride. Passing Adore late, Land Over Sea easily pulled away in the late stages of the race to win going away.

The margin of victory was 4 1/2-lengths for the 1 1/16-mile affair, and Land Over Sea finished up in 1:44.74. Dream Dance got her neck in front at the wire to steal second from a very game Adore, and Northwest Tale filled out the superfecta. Rachel Alexandra winner Venus Valentine could do no better than fifth, and Stageplay, Midnight On Oconee, and Street Fancy completed the order of finish.

Winning jockey John Velazquez, hopping aboard for the first time due to Mario Gutierrez traveling to Dubai to ride Kentucky Derby hopeful Frank Conversation in the UAE Derby, described his trip after the race. “I was on the outside and I didn't want to come out of there rushing. She broke a little slow anyway, so I took advantage of that and saved some ground on the first turn,” he explained. “On the backstretch a horse was backing up, so I went around that one and then by the three-eighths I was sitting third and from there it was all her. When I came down the lane, she switched leads and showed the quality she is and what she was chasing out in California (Songbird).”

Trainer Doug O'Neill, who made the decision to ship east in order to step out of the shadow of the aforementioned Songbird, was obviously pleased with the outcome. “It went great. She ran so well,” he enthused. “I loved where she was all the way around. It did look like Adore wasn't going to give up the lead, so I got a little worried for a second that we were going to run second again to a nice filly. Johnny kept after her and Land Over Sea loved the long stretch and really took advantage of it. There was no quit in her. So grateful for Reddams for giving me this filly and the opportunity.”

Trainer Neil Howard, who saddled runner-up Dream Dance, stated post-race, “I will say that she always gives 110%, but that exceeded our expectations off the layoff. She ran great.”

Julien Leparoux, who piloted Adore to a third place finished, stated similar sentiments as Howard. “Good trip and got to the lead pretty easily, but she got a little tired,” he described.

By Bellamy Road and out of the Pulpit mare Belle Watling, Land Over Sea is owned by Reddam Racing, who picked up the filly via trainer Doug O'Neill out of the Ocala Breeders' Sales Company 2015 Spring Sale of Two-Year-Olds in Training for a mere $130,000. A bridesmaid to Songbird on multiple occasions, the Fair Grounds Oaks is just Land Over Sea's second career win and first graded victory. Prior to today, she was multiple grade 1 placed but could never get the job done against the nation's top filly. Today's win improved her résumé to 8: 2-4-1 for total purse earnings of $468,000.

The top 4 finishers earned points on a 100-40-20-10 scale toward the Kentucky Oaks. Land Over Sea leaped to the top of the leader board by virtue of the 100 points she earned today and will head to Churchill Downs to renew her rivalry with Songbird on the first weekend in May.