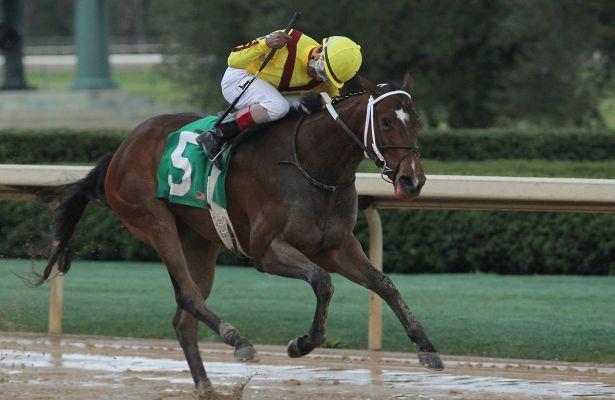 Unlike the Kentucky Derby, which allows for a super full field of 20, the Kentucky Oaks keeps its field to a more compact 14. With a more select field, the shift in which fillies qualify for the historic race tends to be greater than that of its male counterpart. With four points races this weekend covering the country from coast-to-coast, we are assured to see some new faces enter the field while others drop into bubble spots or out of the gate altogether.

If the Oaks were run today, this is what the field would look like:

On the immediate bubble are:

As a side note, Polar River currently sits third on the Oaks leaderboard, but since her connections have already stated that they want no part of facing champion Songbird on the First Friday in May, I have chosen to leave her off.

Many of the above fillies are running this weekend in either the Grade 2 Gazelle (Aqueduct), the Grade 1 Central Bank Ashland (Keeneland), the Grade 3 Fantasy (Oaklawn), or the Grade 1 Santa Anita Oaks (Santa Anita); however, there are also brand new shooters to the scene and fillies with lesser amounts of points running in the hopes of picking up a placing good enough to get them into the field. All four races will award points on a 100-40-20-10 basis. For those fillies that already have points in the bank, any Top 4 finish in these 4 races may do the trick, unless they're currently sitting on a single digit amount. For the outsiders looking in, no less than a runner-up position would guarantee them a spot in the Churchill Downs starting gate.

The Grade 2 Gazelle (Post Time 4:16 p.m. EST) drew a field of seven. Mo d'Amour, Lewis Bay, and Dreams to Reality already have enough points to make the Oaks field. Mo d'Amour looks pretty safe up in the sixth spot, but Lewis Bay and Dreams to Reality could be knocked out of contention if they fail to hit the board. Of the other four fillies in the field, only Flora Dora (16 pts) currently has any points and will need to run at least third, perhaps even second, to leap frog her way into the Oaks field. Clair de Lune, Royal Obsession, and Behrnik's Bank comprise the rest of the Gazelle field.

None of the Gazelle fillies have posted particularly impressive E speed figure scores, with 93 being the highest figure in the field. Lewis Bay, shipping back to Aqueduct after traveling to Florida to face Cathryn Sophia in the Davona Dale at Gulfstream, looks to be the one to beat. Most would agree that Cathryn Sophia is the second best filly in the nation, and Lewis Bay ran a bang up second to her in Florida in preparation for this spot. Mo d'Amour looks like a good play, also, as does Royal Obsession.

The Grade 1 Ashland (Post Time 3:28 p.m. EST) drew a small but loaded field of five, headlined by the undefeated Cathryn Sophia, whose place in the Oaks is already assured. Carina Mia (10 pts) and fan favorite Rachel's Valentina (8 pts) are both well spotted to earn the necessary points needed to stamp a ticket to Churchill Downs as both Banree and Weep No More, the other two fillies in the field, are 20-1 morning line outsiders. However, with so few points in the bank, both fillies need to run either first or second to ensure that they bank enough points to make the Top 14.

I don't see any surprises happening in the Ashland. Cathryn Sophia, Carina Mia, and Rachel's Valentina should run 1-2-3, though not necessarily in the order listed. Unless Cathryn Sophia runs an inexplicable third, Carina Mia or Rachel's Valentina will need to hope that there are not any major upsets this weekend as a third place finish likely will not vault them into a guaranteed spot in the Oaks starting gate.

Like the aforementioned two races, the Grade 3 Fantasy (Post Time 6:09 p.m. EST) also drew a small field, with 6 being the magic number here. Terra Promessa is safe up in the #5 spot on the leader board. Cosmic Evolution (10 pts) could advance to Kentucky by running in the trifecta at the very least, while the rest of the field will need a top 2 finish. Taxable, Florida Bird, Impasse, and Ready to Confess round out the Fantasy field.

Terra Promessa and Cosmic Evolution are the class of the field. Both fillies are stakes winners, with Terra Promessa being the graded stakes winner. Of the other four fillies in the field, Taxable is the one I like best. She is undefeated in two career starts with wins over a fast Churchill Downs track and a sloppy Oaklawn surface. Both of her speed figures are actually higher than anything Cosmic Evolution has ever posted, and trainer Steve Asmussen, who will also saddle Terra Promessa, definitely knows how to condition a filly for a prime effort.

Keeping with the theme of small fields, the Grade 1 Santa Anita Oaks (Post Time 6:10 p.m. EST) drew just 6 fillies willing to take on Champion 2-Year Old Filly Songbird. The Fox Hill Farm owned miss is the undisputed Kentucky Oaks favorite and has already earned her spot in the starting gate next month. Forever Darling (10 pts) and Jade Princess (5 pts) could move on to Kentucky with a Top 3 run, but there's the possibility that it would take at least a runner-up effort to advance depending on what happens in the other three races. She's A Warrior, Kay Kay, Mokat, and Bellamentary make up the rest of the Santa Anita Oaks field, and all four currently have no Kentucky Oaks points.

It's hard to imagine any of these six fillies beating Songbird to the wire, a possibility their connections even have a hard time believing. The general consensus among the rest of the field is that they're running for second. So who is the best of the rest? That might just be Forever Darling who is 2-for-2 at Santa Anita. Jade Princess has thus far not even come close to having an answer for Songbird but could definitely pick up a minor placing. She's A Warrior is still a maiden but did run third behind Songbird in the Las Virgenes, beating Jade Princess in the process. Kay Kay and Bellamentary enter off the same last out race. Bellamentary hit the wire first that day, but Kay Kay was coming in off a long layoff, longer, in fact, than the one Bellamentary was seeking to overcome. As for Mokat, she also has been chasing Songbird's rump, finishing 3rd to the champ in the Santa Ysabel. All in all, if you remove Songbird from the equation, you end up with a pretty competitive field, but they're all running for second.

The outcome of these four races should tie up all the loose ends in regards to the Oaks field. Only one other points race remains on the schedule. The Beaumont, to be run April 17 at Keeneland, only awards points on a 10-4-2-1 basis. Thus, only a win for a filly right on the cusp of making the field would cause any changes to the lineup.