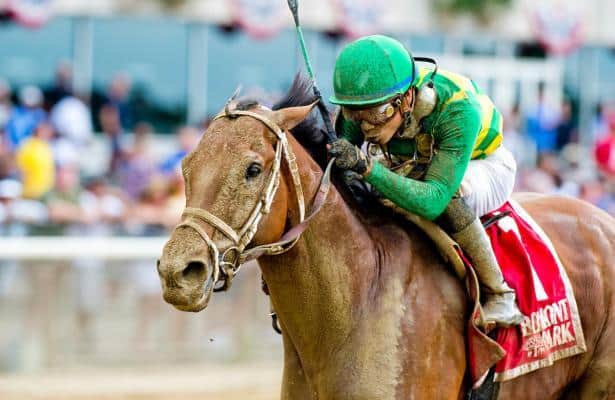 He doesn’t win often, but when Keen Ice does, he makes it count. Most remembered for defeating Triple Crown winner American Pharoah in the Travers, Keen Ice channeled that very same form to take down yet another heavy favorite in Shaman Ghost in today's Grade 2 Suburban Handicap at Belmont Park.

As expected, Matt King Coal broke quickly and went right to the lead. Shaman Ghost took up the second running position followed by Watershed, Follow Me Crev, and Keen Ice.

Despite being the known speed of the field, Matt King Coal and jockey Irad Ortiz, Jr. did not try to run the rest of the field off their feet. Instead, Ortiz, Jr. chose to try to walk the dog on the front end, leisurely riding his charge through dawdling fractions of :25.28, :50.01, 1:13.81, and 1:37.89. Behind him, the running order changed little except for Keen Ice and Follow Me Crev shuffling the last two running positions between them. With the pace slow, only 5 ½ lengths covered the field.

In Belmont’s sweeping far turn, Javier Castellano put Shaman Ghost under a drive, and Jose Ortiz moved Keen Ice up on the outside to take over third. As they turned for home, it initially looked as though Castellano’s pumping was doing little good, but Shaman Ghost finally got his engine going. Pulling alongside Matt King Coal, Shaman Ghost looked him in the eye and ground past to take the lead.

Once he got clear of Matt King Coal, Shaman Ghost looked home free, but Keen Ice was closing hard down the center of the track. Inside the final furlong, Keen Ice waltzed past Shaman Ghost and crossed the wire to the tune of a 3-length upset victory in a final time of 2:02.02 for the mile and a quarter.

Shaman Ghost held second, Follow Me Crev improved to third, Watershed was fourth, and Matt King Coal faded all the way to fifth and last.

Winning jockey Jose Ortiz, stated post-race, "I know that Shaman Ghost is a really good horse but how the race developed, my horse pulled me really close to him. I thought I was going to be a little farther [behind]. When we hit the three-eighths pole, I was right next to him [Shaman Ghost], on his heels, without asking, so I was in a very good position. Keen Ice gave me everything he had. He was full of run today."

That was a great effort, he really ran a huge race," proclaimed Todd Pletcher, who saddled the winner. "Coming into it, we were a bit concerned with the lack of pace on paper. We thought he might have to be a little bit more forwardly placed and Jose [Ortiz] gave him a great ride in able to position him towards the rail. The fractions weren't fast up front, but Jose had him in a perfect position and when he was able to swing out you really saw him extend to the wire."

Jimmy Jerkens, who trains Shaman Ghost, offered up no excuses. "I don't see any excuses, really," he said. "Even though they were going slow, it takes a little out of horses to try and keep close to them. He eventually got the better of him [pacesetter Matt King Coal] but he didn't have a whole lot left."

Castellano, who piloted the runner-up, cited Shaman Ghost acquiring the lead too early as part of the reason why his mount did not come home a winner but also gave plenty of credit to Keen Ice.

By Curlin, and out of the Awesome Again mare Medomak, Keen Ice was bred by Glencrest Farm and is owned by Donegal Racing, who acquired the strapping chestnut for $120,000 as a yearling. Today’s victory improved Keen Ice’s record to 22: 3-2-5 for total purse earnings of $3,037,245. Prior to winning the Suburban, the last time Keen Ice visited the winner’s circle was when he upset American Pharoah in the 2015 Grade 1 Travers.

"We were hoping he'd be able to run fresh coming from Dubai and we gave him a little freshening at Calumet following that race [Dubai World Cup] and he was coming into this race training well," Pletcher stated. "We'll see how he comes out of this, but the [Grade 1] Jockey Club Gold Cup [October 7] would most likely logically be his next step."