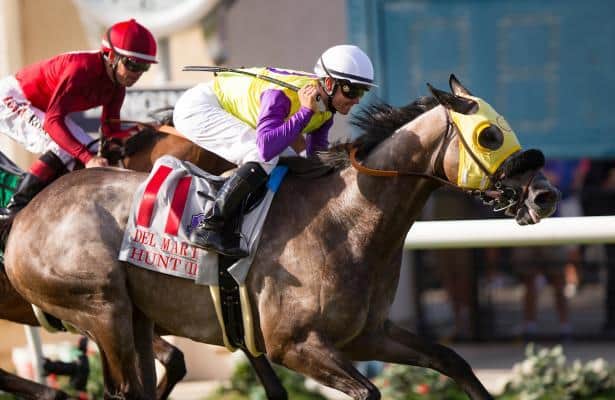 After only managing to become a listed stakes winner through the first 21 starts of his career, Hunt (IRE) has finally found his legs in graded company. Last out the gelding got up late to win the G2 Eddie Read Stakes. Today, Hunt (IRE) once again made what is becoming his typical move in the stretch, exploding up the rail to win the Grade 2 Del Mar Handicap in convincing fashion.

Ashleyluvssugar was quickest to the front but conceded the lead to Mr. Roary, who crossed over from post 12 of 13 to take up the early leg work. Prime Attraction, from post 13, made the cross-track trek with Mr. Roary to take up second to the leader’s outside. Ashleyluvssugar settled in third with Hunt (IRE) glued to him in fourth.

Turning for home, the rail opened up, and with nothing but daylight in front of him, Hunt (IRE) simply exploded for home. Also coming quickly up the rail was Itsinthepost, and Flamboyant (FR) was closing quickly down the center of the stretch. Neither could catch Hunt (IRE), however, and had to settle for second and third respectively.

"The slow pace helped us; he liked that, coming from the shorter race," winning jockey Flavien Prat stated. "We were up close, too. He likes to be among horses, covered up. I followed Gary (Stevens on Ashleyluvssugar) through the hole (at the top of the stretch), then dropped down. He had it from there."

Tyler Baze, who was aboard runner-up Itsinthepost, thought he had the winner. "He was way the best horse; way the best. I had to wait, wait, wait on the turn. If I could have gotten him out, we would have come running."

The story was the same for Bryce Blanc and Flamboyant (FR). "If I could have gotten out sooner, it would have helped," Blanc explained. "I don't know that I could have won it, but I would have been closer."

Prime Attraction, Inordinate, Ashleyluvssugar, Up With the Birds, He Will, Editore (BRZ), Big John B, Liam the Charmer, Monster Bea, and Mr. Roary completed the order of finish.

Ashleyluvssugar, who was prominent throughout the race, finished a lackluster sixth due at least in part to the saddle slipping. Gary Stevens, who was aboard the 6-year old gelding, said that he could not ride him the way he wanted to due to the saddle malfunction.

By Dark Angel (IRE) and out of the Vettori (IRE) mare Mansiya (GB), Hunt (IRE) was bred by Michael O’Callaghan and is owned by Michael House. He’s compiled a 23: 7-5-3 record, with his biggest two wins coming in his most recent 2 starts.

"It was a masterful ride," commended winning trainer Phil D'Amato. "Flavien (Prat) just bided his time, let the race develop a little, found a seam on the inside and turned him loose. He got it done."