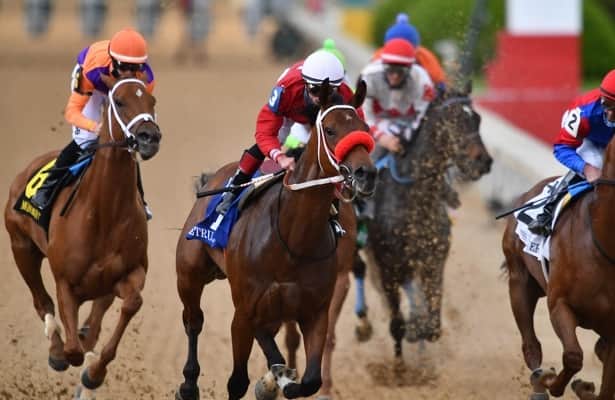 The prestigious Ogden Phipps Stakes (G1) on the Belmont Stakes undercard attracted the best older fillies and mares in training in what will surely be just one of many previews for the Breeders’ Cup Distaff.

Unfortunately for fans, champion Monomoy Girl is currently on vacation while it is a bit early for 2021 Kentucky Oaks (G1) winner Malathaat to face her elders. Carded as the seventh race, the Ogden Phipps attracted a field of seven, however just five will line up to contest the 1 1/16-mile affair after Todd Pletcher declared Valiance out of the race due to a fever on Thursday and trainer Ken McPeek did likewise with champion Swiss Skydiver on Friday.

While the field is depleted, there will be no easy answers as to who will come away the winner. Letruska won in her last outing, while Shedaresthedevil won the La Troienne (G1) in her most recent race. So which fine filly will it be? Laurie Ross of Pedigree Power and Ashley Tamulonis of Coast To Coast offer up their decisions as to who will win and who will have to settle for a minor award.

Laurie: Surprisingly, only three favorites in the last decade have won the Ogden Phipps Stakes.

Letruska will take her customary position on the lead, pressed by Shedaresthedevil. Water White, Bonny South, and Queen Nekia will chase. Jose Ortiz must keep Swiss Skydiver happy on the rail unless he can tip her outside. His brother aboard Letruska may have something to say about that. Shedaresthedevil should get a perfect stalking trip from post 5.

This is a conundrum, as any one of these talented fillies could win it. I’ll go with Shedaresthedevil on the outside. She figures to get the best trip.

Ashley: Personally, I think Jose Ortiz tips Swiss Skydiver off the rail as quickly as possible now that it’s public knowledge that the champion filly is uncomfortable being covered up. I do think Letruska and Shedaresthedevil will share the lead. Since the Ogden Phipps is only 1 1/16-mile, even if the pace is hot, class should prevail unless one of the others runs a career best race.

This is tough. The big three have traded blows and any of them could win on any given day. For me, my heart belongs to Swiss Skydiver, and I trust that Jose Ortiz will give her a good ride.