Head to Head: Handicapping the 2021 Fourstardave 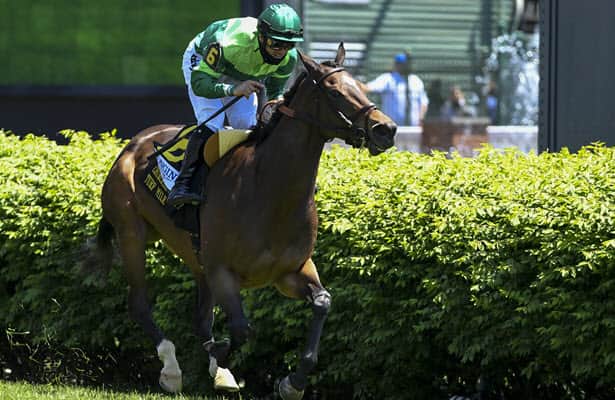 Saturday’s $500,000 Fourstardave Handicap at Saratoga attracted a lively field of older turf milers. Besides earning a Grade 1 victory on their resume, the winner earns a fees-paid berth to the $2 million Breeders’ Cup Mile on November 6 at Del Mar.

The race attracted a field of eight, including three mares. Got Stormy won this race two years ago but just could not run down winner Halladay last year, settling for second. Meanwhile, Raging Bull is looking for his first Fourstardave victory after finishing second to Got Stormy two years ago and fifth last year. The stakes are high and the competition is fierce this year, making for a bet-worthy race.

Laurie Ross of Pedigree Power and Ashley Tamulonis of Coast To Coast weed out the contenders from the pretenders.

Laurie: The Fourstardave is a contentious field, and five of the eight entries have a legit shot at winning. I’m going with the lone speed here. Rosario can slow things down and have enough left in the tank to get the job done. I’m leaving Whisper Not out of my picks, but he’s a live longshot, and I’ll probably regret it.

Ashley: Man, oh man! It is not often that you get a filly or mare line up against the boys, let alone three in one race. I think this race sets up perfectly for Blowout, who is the lone speed. Raging Bull will have his work cut out for him, especially considering how much Got Stormy likes the Saratoga course. So I see Laurie’s mare on top and raise her two mares in the exacta and Whisper Not.