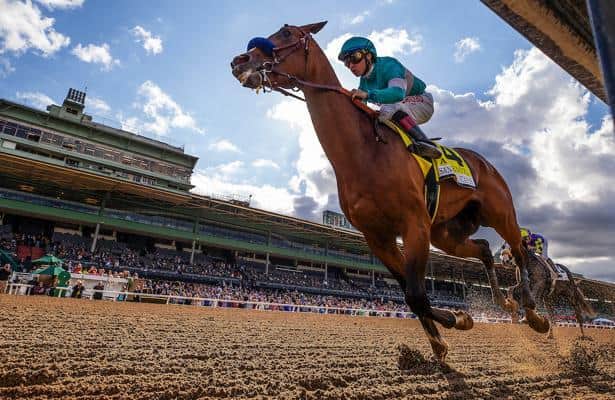 Saturday's Santa Anita Derby (G1), the next California prep for a postponed Kentucky Derby, has assembled in the form of seven 3-year-olds set to go 1 1/8 miles.

Laurie Ross of Horse Racing Nation's Pedigree Power blog and I sort out the contenders from the pretenders.

Laurie: Stating the obvious, the Santa Anita Derby is all about the rematch between the undefeated Authentic and Honor A. P. No doubt I’ll be ridiculed for not picking the obvious, sure-thing Authentic. But there's no such thing as a sure thing in horse racing.

Ashley: Authentic looks poised to continue his undefeated march. With such a small field, drawing the outside post will be no hindrance as he has enough speed to quickly get to the rail after the break. Honor A. P. will be hoping to turn the tables and probably should not let Authentic get too far ahead in the initial stages of the race. Shooters Shoot offers an exciting alternative to Authentic in terms of pace. All in all, not a race in which to get fancy.