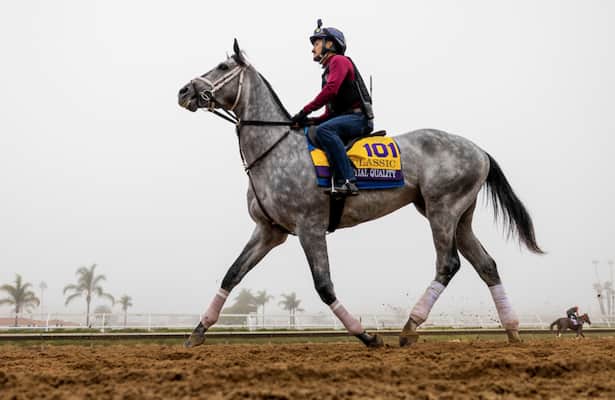 Each year the $6 million Breeders’ Cup Classic is the toast of the fall. It brings together certainly the nation’s, if not the world’s, best males and sometimes females, to compete at the classic distance of 1 1/4 miles. This year’s edition, held at Del Mar, pits the best of the older males, Knicks Go, against a trio of accomplished 3-year olds and a duo of equally talented 4-year-olds.

Aside from bragging rights, the winner of this year’s Classic could be crowned Horse of the Year. Should either Knicks Go or Essential Quality annex the weekend’s biggest race, they will be a shoe-in as they are two of the top contenders for the honors. Should both fail, that will leave the door open for others, particularly Letruska, who headlines the Breeders’ Cup Distaff.

With so much on the line, Laurie Ross of Pedigree Power and Ashley Tamulonis of Coast To Coast sort out the contenders from the pretenders.

The favorite has won twice and placed twice in the last decade, and 3-year-olds have won four times. I can't recall when I have seen so many pacesetters in the Classic, and my natural inclination is to look for a horse that can settle just off the pace. So that leads me to Essential Quality. He is facing the most challenging field of his career, and Tapit offspring don't do well around Del Mar's turns. But the pretty gray colt is in the same league as other 3-year-old Classic winners: Authentic, Arrogate, American Pharoah, Curlin and Tiznow. With that being said, any of the top four can win, and it wouldn't be a surprise.

Ashley: As Laurie indicated above, this year’s Classic is loaded with pacesetters. Initially it did not look like there was going to be this much pace, but the recent switches in run styles for Max Player and Art Collector have caused the front-end numbers to swell. With Knicks Go never having attempted the classic distances before and now also likely to face a good bit of pressure up front, I, too, must focus on Essential Quality. His run style will place him in a good position without getting cooked with the rest of the pacesetters. I believe Essential Quality’s main competition will be rival Hot Rod Charlie and Max Player.