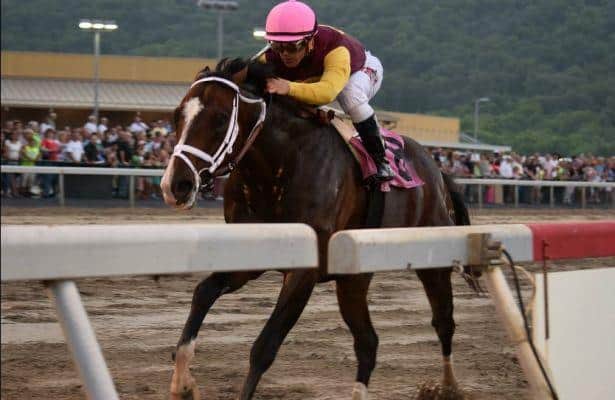 Breaking from Post 8 with Javier Castellano in the irons, Golden Lad broke sharply and immediately moved inward to grab a nice, ground-saving rail spot. He then settled into second, just to the inside of longshot Very Lucky. Albano and East Hall followed in behind those two with the rest of the field strung out behind them.

Racing on nearly even terms, Very Lucky and Golden Lad clicked off strong fractions of :23.13, :47.05 and 1:11.44. As the duo rounded the far turn and hit the top of the stretch, Very Lucky valiantly tried to keep things interesting, but Golden Lad shook off that foe and opened up on the field. With the win never in doubt in the stretch, it became a race for the minor placings as Golden Lad continued to pull away from his rivals. At the wire, Golden Lad was a comfortable 5 lengths ahead of the runner-up and stopped the clock for the 1 1/8 mile race in 1:49.95.

Kid Cruz, who did not have the best of beginnings, circled the field and closed from dead last after having spotted the leaders more than a dozen lengths to get up for second. Nowalking came through on the inside to take over third, and pace-setting Very Lucky hung on to save fourth.

Winning rider Javier Castellano had been concerned about his trip aboard Golden Lad but acknowledged that everything ended up working out in their favor. "I was concerned a little bit with the horse right next to me tightening me all the way in the race. But my horse did so well today. He didn’t mind another horse right next to him. To be honest, I didn’t expect to be on the lead, but he broke so well at the gate," Castellano explained. "I used my own judgment and took it from there. I didn’t want to get into a duel because it’s a mile and an eighth. It’s not a short race. But, fortunately, the horse ran so well. The way he traveled today, he traveled so good. He just felt like he wanted to go, and when I asked he responded. I could feel the acceleration. He reacted nice and smooth and picked it up very well."

By Medaglia d’Oro and out of the Seeking the Gold mare Broadway Gold, Golden Lad is a homebred for E. Paul Robsham Stables and is trained by Todd Pletcher. The 5-year old bay is a half-brother to multiple stakes winner and grade 1 placed R Gypsy Gold and multiple graded stakes winner and Kentucky Oaks runner-up Broadway’s Alibi. Since beginning his career nearly two years ago to the day, Golden Lad has put together a 14: 7-2-0 record for purse earnings of $466,220. Prior wins include the Essex Handicap and the G3 Razorback Handicap.