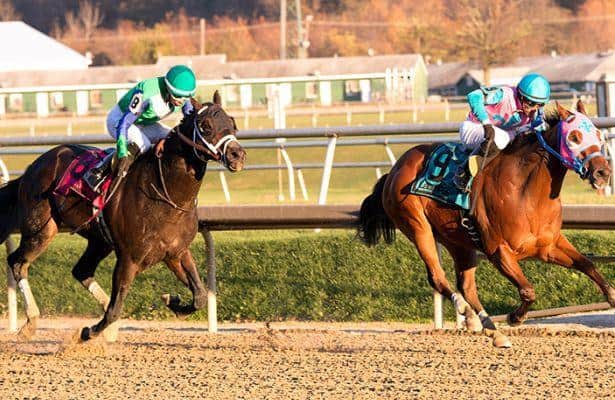 Never the leader at any point of call during the 2015 renewal of the Frank J. De Francis Memorial Dash Stakes, Gentlemen’s Bet nonetheless picked up the win at Laurel Park after jockey Daniel Centeno lodged a successful complaint against Trouble Kid.

At the break, Trouble Kid rushed up from post 9 to vie for the lead with a trio of other rivals. With jockey Joshua Navarro in the irons, Trouble Kid then proceeded to crowd those foes in his quest to get the short trip around the track at the rail. During the process, Gentlemen’s Bet was checked hard and ended up bumping with Palace. That led to a bumper car effect as Palace then exchanged bumps with Stallwalkin’ Dude.

Gentlemen’s Bet quickly recovered from the crowding and bumping incident at the 5/8ths pole and rushed back up to second from fourth, 1 ½-lengths off pace-setting Trouble Kid. With the race now moving along smoothly, Trouble Kid set splits of :22.33 for the opening quarter and :45 for the half.

Turning for home, Gentlemen’s Bet was put to a drive in a futile effort to catch Trouble Kid in the lane. Behind him, Palace and Stallwalkin’ Dude were also spinning their wheels, unable to make up any ground on either Gentlemen’s Bet or Trouble Kid. The latter crossed the wire the unofficial winner by ¾-length in a final time of 1:09.34 for the six furlongs over Laurel’s fast main track.

After a steward’s inquiry into the bumping and crowding at the 5/8ths pole, the aptly named, for today at least, Trouble Kid was disqualified and placed second and Gentlemen’s Bet was put up and awarded the victory. Those were the only two placings affected by the disqualification, leaving the order of finish from third out to stand. Palace checked in third with Stallwalkin’ Dude fourth. Sonny Inspired, Sir Rockport, Spring to the Sky and Cutty Shark completed the order of finish.

By Half Ours and out of the Gentlemen mare Lady of the Sun, Gentlemen’s Bet is owned by Harry T. Rosenblum. Trained by Ron Moquett, the De Francis Memorial Dash was just Gentlemen’s Bet’s second win of the year and first since March when he won the Hot Springs Stakes. Though not a graded stakes winner, the 6-year old is multiple graded stakes placed and even ran 3rd in the 2013 G1 Breeders’ Cup Sprint.