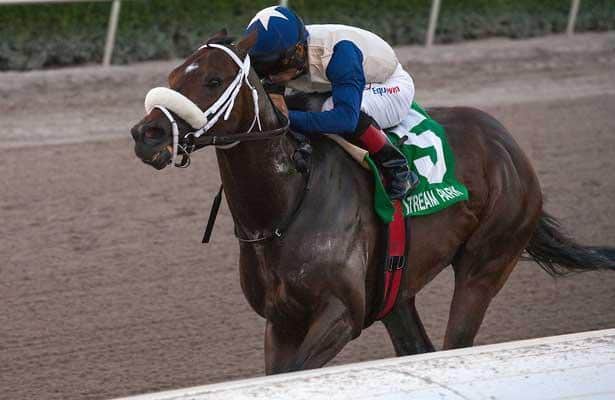 Photo: Arron Haggart/Eclipse Sportswire
Dismissed at odds of 14-1 by bettors, Falling Sky proved he was more than a one hit wonder with a smooth, front-running score in the G3 Gulfstream Park Sprint. Last year the now 4-year old son of Lion Heart made some noise on the Kentucky Derby trail, taking the Sam F. Davis before running 3rd and 4th in the Tampa Bay Derby and Arkansas Derby, respectively. When the Big Dance came around, however, the colt was a non-factor, finishing dead last. After that dismal performance, the colt was given some time off and transferred from John Terranova II’s barn to George Weaver’s.
In his first start for his new trainer, Falling Sky ran into bad racing luck. Stumbling out of the gate, the colt worked his way up into the 6th spot before ultimately giving way and finishing 9th in the field of 10 assembled for the City of Laurel Stakes at Laurel Park. The colt then ran into a buzz saw in Revolutionary in his second start off the layoff. Out of the gate quickly, Falling Sky led every step of the way in the NW3X optional claimer at Gulfstream but was just nipped at the wire by the returning Revolutionary.
Falling Sky’s effort against Revolutionary last out had him primed and ready to fire today, and boy did he run a doozy of a race. With Luis Saez back in the irons, Falling Sky rocketed out of the gate from post position 5 and quickly settled in on the lead. Singanothersong was sharp out of the gate, too, and moved up to pressure his rival on the front end. With Singanothersong glued to his outside flank, Falling Sky threw down splits of 22:61 and 44:37 and a scorching 1.07:86 for 6 furlongs. Then in the stretch drive, instead of back pedaling after setting such a grueling pace, Falling Sky turned for home and pulled away from the field, sailing under the wire clear by 5 ¼ lengths.
Narvaez, who raced at the back of the field, closed from second last to get the place. Also closing from the back of the field was Brujo de Olleros, who got up for 3rd in the final furlong. The order of finish was completed by Catron, Singanothersong, Reveron, Laugh Track, Silver Menace, Jackson Bend, Fort Loudon, and Purple Egg.
Falling Sky just missed the track record by two-tenths of a second while setting a new stakes record by completing the 7 furlongs in 1.20:65. It was bombs away for the pari-mutuel payoffs. Off odds of 14-1, Falling Sky returned $31.60/$13.40/$8.00. One hundred thirty-nine to one longshot Narvaez paid a whopping $89.20/$23.60 for the place, and Brujo de Olleros paid $4.80 for the show. Exotic payoffs were also huge as the $2 exacta was worth $1,627.00, the $1 trifecta was worth $5,077.60, and the $1 superfecta was worth $32,331.40.
Talking about Falling Sky's previous race, trainer George Weaver stated, "That race was actually run faster than the Hal's Hope later in the day. We thought in that race, internally, that he ran a very, very good seven furlongs. He got tired in the last 100 yards or so." Cutting back in distance for the Sprint was an easy decision, one Weaver explained, "We're like, 'Ok, we went a mile. We'll cut back to seven furlongs and he'll fly.' I didn't know he would fly that high, but he did."

Falling Sky’s scintillating win in the Gulfstream Park Sprint greatly flattered Revolutionary, who races tomorrow in the mile and an eighth Grade 1 Donn Handicap. Not that the multiple graded stakes winning son of War Pass needed flattering, but it always makes a contender look better when the competition they beat previously comes back to win in such a huge way in their next outing. Among others that Revolutionary will face is the 3-Year Old Champion Colt Will Take Charge.

Luis Saez, who has been aboard Falling Sky for 5 of the colt's races, stated after the race, "My horse ran really well; he felt very comfortable. I knew I had a lot of horse left when I asked him in the stretch. He felt good the whole way. Last time, I think he just needed the race, so I knew he would be tough today."

Though the decision on the colt's next race has not yet been made, Weaver already knows what his main goal for the year will be with Falling Sky. Sprinting will be the focus, and the colt will be aimed for the Breeders' Cup Sprint at Santa Anita in November.

Out of the stakes placed Sea Hero mare Sea Dragoness, Falling Sky has been through the auction ring twice. As a weanling, he went for a mere $16,000 to Armachan Stable and Off the Hook LLC at the Keeneland 2010 November Breeding Stock Sale. His sale price jumped significantly when he was purchased for $425,000 at the Ocala Breeders’ Sales Company 2013 Winter Mixed Sale by Justin Casse on behalf of Newtown Anner Stud, James Covello, and Joseph Bulger. Now a winner of 5 races from 11 total starts, Falling Sky has earned $380,470.