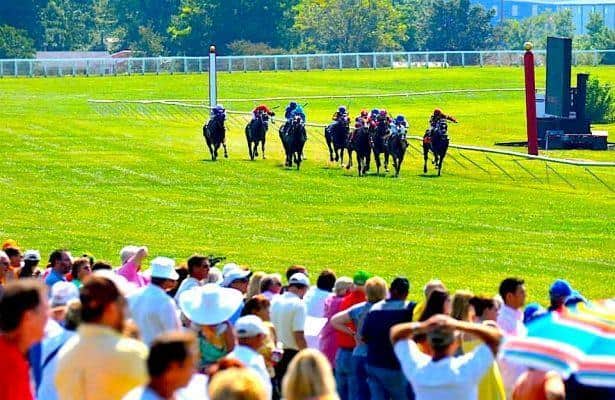 When Dalika and Princess Grace enter the starting gate for Saturday’s Grade 3, $750,000 Kentucky Downs Ladies Turf going a mile, it will be the third such meeting between the two.They are currently even with a win apiece in their matchups.

The two mares faced each other for the first time in last year's Ladies Turf. Princess Grace went to post as the 11-10 favorite for trainer Michael Stidham and emerged the winner by a half length despite getting off to a slow start.

After missing the break, Florent Geroux on Princess Grace hustled the mare to get within striking range of the early leaders. Sitting in third in the far turn, they got the first crack at the pacesetters and seized the lead in the stretch.

Behind her, Dalika was still in fifth but furiously driving up the center of the track. Unfortunately for the German bred, Princess Grace was able to fend her off long enough to hit the wire first.

Their most recent meeting came last out in the Aug. 13 Beverly D. (G1) at Churchill Downs. This time it was Dalika who had the advantage. With Brian Hernandez, Jr. up, Dalika broke from the rail and immediately established the lead. Princess Grace sat just off her in second, pouncing in the stretch to briefly wrest the lead away from her rival. Dalika would not be denied, however, re-rallying to triumph by a half length in a course record time of 1:46.31.

In the Ladies Turf, Dalika once again drew the rail and has been established as the 2-1 morning-line favorite off her Beverly D. victory.

Prior to that, she was fifth at long odds in the Diana (G1) and second in the Mint Julep (G3) in her 2022 bow. Hernandez, Jr. retains the mount.

Princess Grace, meanwhile, drew post eight in the field of ten. She sports a similar record to Dalika’s in 2022. She won the Dr. James Penny Memorial (G3) two starts back and was seventh in the Eatontown (G3) in June to kick off her year.

Both mares appreciate the Kentucky Downs course. Dalika has a record of 2: 1-1-0 while Princess Grace won her only prior start here.

In with a chance to upset the two favorites are Hendy Woods, dead-heat winner of the Indiana General Assembly Distaff in her most recent start, and Stolen Holiday, winner of the Eatontown (G3) last out.

Hendy Woods was fifth in the Mint Julep (G3) two starts back and third in the Modesty (G3) on Kentucky Derby weekend. Last year the daughter of Uncle Mo won the One Dreamer Stakes here two days prior to Dalika and Princess Grace’s throwdown in the Kentucky Downs Ladies Turf. Her pace pressing style will have her sitting just off her two speedy rivals.

Stolen Holiday will try to cut toward the rail from post nine to be part of the vanguard. This 5-year old daughter of War Front is an up-and-comer after getting her first graded win last out.

Also worth a look are Lady Speightspeare and Flippant. Lady Speightspeare is riding a two-race win streak, having rattled off a front-running score in the Nassua (G2) on turf and a victory in the Trillium (G3), both at Woodbine. Look for her to be part of the early pace.

Flippant, on the other hand, will be at the back of the field early on. She was most recently sixth in the Yellow Ribbon Handicap (G2) at Del Mar but was the other half of the dead-heat in the Indiana General Assembly Distaff two starts back.

The field is completed by Country Chick, Sunny One, Market Rumor, and Henrietta Topham. The race is the eighth on the card and will go to post at 4:30 p.m. EDT.