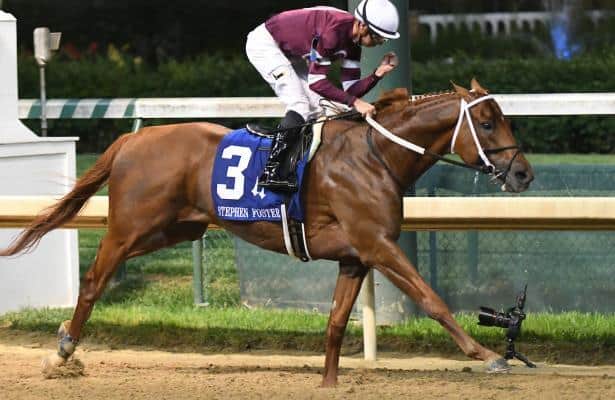 Like in years past, the 2017 edition of the Breeders’ Cup Classic will first be filled with automatic berth winners. In other words, winners of seven pre-selected races will get a fees paid, guaranteed position in the starting gate come November 4. Five of those races are in the books with four different winners.

The Win and You’re In series kicked off back in February with the aptly named February Stakes in Japan. Winner Gold Dream ran mid-pack initially before moving to the center of the track for the stretch drive. The bay colt determinedly closed using the overland route and had enough in the tank to battle back after being headed by Best Warrior in deep stretch.

America’s current top ranked racehorse, Gun Runner, has won two “Win and You’re In” races. He was an easy winner of both the Stephen Foster Handicap in June and the Whitney Stakes in August. The 4-year old Candy Ride colt has been the model of consistency all year with the lone blemish on his record being a second-place finish to Arrogate in the Dubai World Cup.

Girvin is thus far the only 3-year old to have earned a spot in the Classic gate. That came by virtue of a hard charging, up just in time, nose win in the Haskell Invitational. Earlier in the year, the Joe Sharp trainee swept the Louisiana preps for the Kentucky Derby, but in both tries at the mile and a quarter distance, the Tale of Ekati colt finished way off the board, running 13th and 11th in the Kentucky Derby and Travers respectively.

The most recent automatic berth winner is Collected. Another model of consistency for the year, the Bob Baffert trainee is 4-for-4 in 2017, with all wins coming in California. In taking the Pacific Classic, Collected not only guaranteed himself a spot in the Classic, he also earned a signature win in the grade 1 affair. Not only did he win at the highest level, he also beat heavily favored Arrogate, who dominated the NTRA Top Thoroughbred Poll for the majority of the year.

Two challenge races remain: the Awesome Again on September 30 at Santa Anita and the Jockey Club Gold Cup October 7 at Belmont Park. Both are grade 1 events.

We’re likely to see the “red-headed stepchild” of the Baffert barn, Cupid, in the Awesome Again. Since winning the Grade 1 Gold Cup at Santa Anita in May, Cupid has not been seen much. When we did see him face the starter, it was in a listed stake rather than in a graded event.