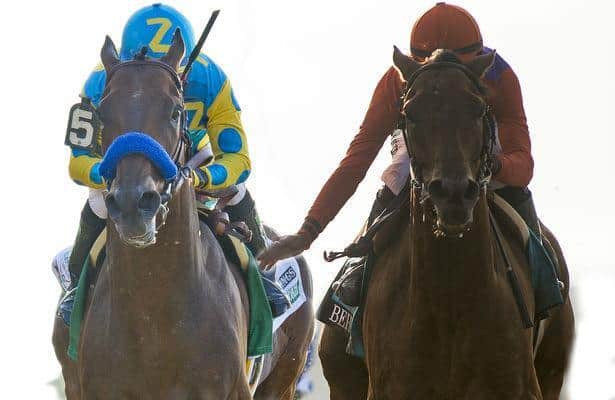 With just two weeks to go to the Breeders’ Cup Championship races, the fields for all events have more or less solidified. Nothing will be “official” until the pre-entries come out, but the field for the Grade 1 Breeders’ Cup Classic, at least, has not changed much in the past few weeks. With all “Win and You’re In” races for the Classic in the books, it is time to separate the pretenders from the contenders, and take a look at who could potentially rock the boat.

Keen Ice—Can thank Frosted for helping him get that big breakthrough victory at Saratoga in the Grade 1 Travers. Frosted did all the dirty work of pressuring American Pharoah early and often, paving the way for Keen Ice to make a big stretch run and snatch the victory away from them both. Prior to that, Keen Ice had chased them both around the track all year, running well but unable to run down either in the stretch. With Frosted unlikely to go on a suicide mission again, Keen Ice will need to come up with something better to catch the top flight in the stretch.

Hoppertunity—Since taking the G2 Pasqual Stakes back in January, Hoppertunity has not found the winner’s circle. Granted he has run some okay seconds and thirds, but he was never a threat nor factor in those efforts. Additionally, those races were against lesser competition overall than what he will see at Keeneland.

Hard Aces—Had his coming out party in the Grade 1 Gold Cup at Santa Anita back during the summer. Since then, he has run 6th against the same group of foes in both the Pacific Classic and the Awesome Again. So was the Gold Cup a fluke? So it would seem. And now that he will be facing the toughest group of his career, it’s hard to imagine that we will see the Hard Aces that won the Gold Cup rather than the Hard Aces that couldn’t get hit the board in his next two tries.

Gleneagles—After running 6th in today’s Group Queen Elizabeth II Stakes, trainer Aidan O’Brien did not rule out the possibility of shipping to Keeneland for the Breeders’ Cup Classic as has been expected for months. Even before running 6th in a race two weeks before the Classic, Gleneagles was a toss. Unraced for 4 months prior to today, the superb Euro miler had scratched out of 4 races due to soft turf. Considering the Classic has been the goal for some time, I would have expected O’Brien to ship Gleneagles to the U.S. way ahead of time to prep in a couple dirt races here. Now instead of having 4 ½ months off, Gleneagles will have just 2 weeks off plus shipping abroad during the time.

Effinex—Has run consistently well this year, but his two graded stakes wins came against short, overmatched fields. The exception to that was Tonalist’s presence in the Suburban and Wicked Strong’s presence in the Excelsior. However, Effinex has not yet seen the likes of competitors like Beholder, American Pharoah, Honor Code, etc.

In with a Shot

Honor Code—Went from potential superstar to outright superstar from last year to this year. He got the better of Private Zone in the Gulfstream Park Handicap to begin his year and then added career making scores in the Met Mile and Whitney in the spring and summer. He has a legitimate shot here, but he will need some pace help up front as he comes from way out of it to gun his rivals down in the stretch. The defection of Liam’s Map has done him no favors, and whether he’ll be spinning his wheels or gaining ground in the stretch will depend on how fast Beholder and American Pharoah go early.

Tonalist—Like Honor Code, Tonalist is going to need a favorable pace scenario in order to make the most of his stretch run. In the Suburban, the Evans color bearer was as much as 15 lengths off the lead and saw his rally fall just short of Effinex’s. In the Met Mile, Tonalist had a huge jump on Honor Code but had no answer for that foe’s devastating turn of foot. The same thing happened in the Whitney before Tonalist finally found his way back to the winner’s circle via a sloppy edition of the Jockey Club Gold Cup. As far as deep closers are concerned, Honor Code has proven in head-to-head match-ups to be the better of the two, but you can never count out Tonalist.

Frosted—Has the best chance of this group to get the coveted win. He has enough tactical speed to stay close to Beholder and American Pharoah without wearing himself out, and he does not need a favorable pace scenario as he is not a deep closer like half of this group is. When Frosted is hot, he is hard to stop, but there have been some races where he just could not get past a foe in the stretch. He’ll need to bring his A++ game to Keeneland, but he will at least have the advantage of being one of the ones with first jump on the leaders.

Smooth Roller—A rapidly improving type, Smooth Roller took the Awesome Again Stakes with little resistance from a field that included the reigning BC Classic winner, the reigning Gold Cup winner and the defending Clark winner. The Classic, for which Smooth Roller has an automatic berth, will be just the fifth career start for the Hard Spun gelding. Like Frosted, Smooth Roller likes to settle in just off the lead and track the pace; therefore, he will also have a leg up on the deep closers Tonalist and Honor Code. Whether or not he has the experience to get the job done against such a formidable group remains to be seen, but I like his chances better than those of many of his more experienced rivals.

American Pharoah—If not for Frosted’s suicide mission in the Travers, we would be looking at an undefeated, for the year, Triple Crown winner coming into the Classic. As it stands, American Pharoah is seeking to make history by becoming the first TC winner to also notch a victory in the Breeders’ Cup Classic. Mind you, the last Triple Crown sweep came before the Breeders’ Cup was even born, but the BC has become such an important part of the industry, that a victory/loss could make or break a horse’s chances at year-end honors. With his high cruising speed, American Pharoah is super tough to gun down in the stretch, and it’ll take everything his foes have to make it happen.

Beholder—It’s hard to find a flaw with this champion race mare this year without sounding nit-picky. She is a perfect 5-for-5 on the year and already owns a victory over the boys. However, as has previously been pointed out, the Pacific Classic field she beat was not exactly a super strong field. The second drawback here is the fact that she has yet to ship and win. With that said, she showed in the Kentucky Oaks that she could completely lose her head and still run a very respectable second. Then in the Ogden Phipps, she exited the race injured. You could say she has not yet had a fair shake at shipping and winning, and when you look at it like that, you’re absolutely right. Third time’s a charm? Just could be.

I can hear the grumbling now. This is one of the deepest Classic fields in some time, and I have it pretty much narrowed down to a Battle of the Sexes. Had Liam’s Map not defected, the complexion of this race would look vastly different. As it stands, American Pharoah and Beholder are the only two who have the early speed and will want to either be on the lead or possibly right there closing pressing the pace. Without a third player in that scenario, it is doubtful a grueling pace develops, something that would favor the deep closers. This looks to be won by a runner on or near the lead, and the top two choices in that category are the two Eclipse Champions in the field.