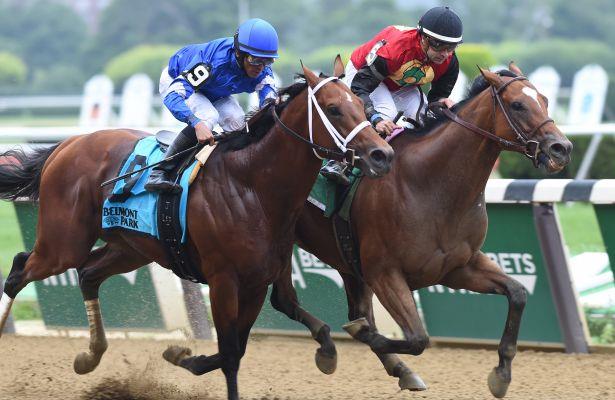 A. P. Indian remained perfect in 2016 with an upset victory in the seven furlong $400,000 Grade 3 Belmont Sprint Championship.

It was a good start for all, and defending Belmont Sprint champion Private Zone went straight to the front to show the way. Rank in the opening sixteenth, the 7-year old gelding then settled nicely for jockey Martin Pedroza on the lead. Green Gratto moved up to his outside to press the pace, and Marking took up third with A. P. Indian down on the rail in fourth.

Closely hounded by Green Gratto, Private Zone set quick splits of :22.66 and :45.33. A. P. Indian moved up a spot to take over third from Marking. The front four were followed by Ready For Rye, Roxbury N Overton, and Nubin Ridge.

Coming off Belmont's sweeping far turn, Marking moved up to Private Zone's outside and A. P. Indian cut the corner on the pacesetter's inside. Lined up three abreast and approaching the final furlong, A. P. Indian took over the lead as Private Zone threw in the towel. Drifting out while Marking drifted in, those two battled to the wire. Try as Marking might, however, he could not get by A. P. Indian who held on to win by a head in a final time of 1:21.41.

Anchor Down and Joking, the 2016 Westchester and True North winners respectively, were key race day scratches.

Speaking by phone, winning training Arnaud Delacour stated, “Well, obviously it was a huge performance. We thought about coming to run in this race last year but he ran into some minor issues and we couldn't make the race. He's come back very well this year. I usually leave the options open to the rider and Joe did a great job keeping him covered up and he extended away in the stretch.”

Winning jockey Joe Bravo gave his mount all the credit, saying, “Horses like this make our job so easy. He breaks from the gate with control, relaxes, turns off and breathes underneath me so comfortably that all you have to know is when to pull the trigger. He really opened up beautifully turning for home and made me look good.”

By the late Indian Charlie and out of the A. P. Indy mare Ender's Sister, A. P. Indian is a homebred for Green Lantern Stables. A winner of 8 races from 14 starts, the 6-year old gelding has only been out of the exacta twice in his career. Though previously a multiple stakes winner, the Belmont Sprint was his first graded score and increased his career earnings to $527,434.

According to Delacour, there is nothing definite in mind for A. P. Indian's next start. “Going forward I'll definitely take a look at the races at Saratoga and we'll keep our options open but we'll first see how he comes back form this race first,” he said.