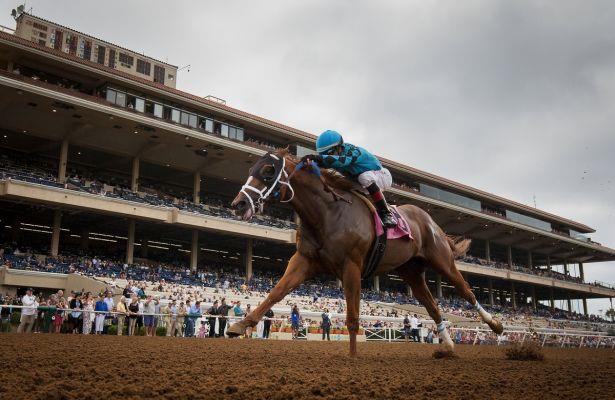 Opening weekend is in the books at the Del Mar Thoroughbred Club and what a start to the summer meeting in San Diego County it was. A big Opening Day party, the return to the lawn, graded stakes action and a couple of good-looking two-year-olds highlighted the first of nine weeks “Where the Turf Meets the Surf.” What a great meet it should be!

As usual, Opening Day at Del Mar was quite the party. A crowd of 42,562 was on hand making it the tenth largest in the history of the venue. The hat contest, a plethora of beautiful women decked out for the occasion, and a solid ten-race card all made for a wonderful day at the races. Most noticeable to regular horseplayers in California was the return to the turf. After a few weeks off from racing over the “green” at Santa Anita due to the installation of a new course for the fall, it was great to once again see racing on both surfaces.

Friday’s racing was headlined by a full field of three-year-olds going a mile over the Jimmy Durante Course in the Oceanside Stakes. The annual Opening Day headliner was won in impressive fashion by Peter Miller conditioned Monster Bea. The son of Hat Trick had only been out West under Miller’s care for a week before the stakes win, but he took advantage of a strong ride from Gary Stevens and great conditioning before heading to California from star trainer Mark Casse to take down the lions’ share of the $100,000 purse. He will point to the La Jolla on August 6 and the Del Mar Derby on September 4.

Saturday was probably the lightest of the three opening weekend cards, but it did feature the Grade II Yellow Ribbon. The turf event for fillies and mares saw Her Emmynency set the early tempo and James Cassidy conditioned Prize Exhibit make a move on the backside setting up a late run from the defending champion. She’s Not Here, a five-year-old daughter of Street Cry, once again illustrated her affinity for the Del Mar lawn by out finishing Fresh Feline to win her second straight Yellow Ribbon. The favorite Nancy From Nairobi did not get a great trip, but closed well to finish third. Drayden Van Dyke was aboard the Victoria Oliver trained mare who was not quite clear on why her runner seems to perform so much better at Del Mar, but suggested “maybe she just likes it because it’s a little more firm than most.”

Sunday offered a strong ten-race card that included the Grade II Eddie Read, as well as a maiden event for two-year-olds that produced two runners to keep an eye on during the rest of 2016 and into next year.

The eighth race on the card was a maiden special weight event at five furlongs. The field was comprised of several runners with a race “under their belt,” as well as a few that were making their career debuts. One of the colts with experience was 4-5 favorite Chasing Aces (pictured above). The son of Flatter is trained by Peter Miller and owned by the Rockingham Ranch. The $225,000 purchase from the Barretts March 2016 two-year-old in training sale ran a strong second to the third place finisher in the Santa Anita Juvenile Stakes Silver Assault in his debut, but really put it altogether in his second start. In fact, he finished the five-furlongs in a dazzling 56.21 seconds and earned a 101 Beyer  in the track record performance. Needless to say, he is one to keep an eye on moving forward.

In addition to Chasing Aces, Straight Fire was extremely impressive in Sunday’s eighth. Making his first start for trainer Keith Desormeaux, the son of Dominus not only was an incredibly good-looking animal, but also proved to be quite fast as well. Despite hitting the wire second, he earned an 87 Beyer in his debut and did so for a barn that rarely has their first-time starters “cranked” first out. It is easy to see why they spent $250,000 on this colt. Based on looks, he should have no issue going further and is one to keep an eye on as well.

The Sunday feature was the Eddie Read and the mile and an eighth event over the lawn did not disappoint. In the end, it was the favorite Midnight Storm under a strong ride from Rafael Bejarano that got to the wire first holding off Ashleyluvssugar and Flamboyant to win back-to-back graded stakes events. The son of Pioneerof the Nile has now won 7 of his 17 career starts and has earned $981,110. Trainer Phil D’Amato said that, “if he comes out of this race like he came out of his last one, maybe the Del Mar Mile is next, but we’ll see what he tells us.”

The first weekend of the Del Mar summer meeting was great and there is so much more yet to come. The San Diego Handicap will highlight next weekend ‘s racing. The Saturday headliner will feature the return of California Chrome, as well as Bob Baffert trained Dortmund. Join me on “Shap ‘Cap” Friday for my video preview of the big race.

Scott has been a fan of handicapping and following thoroughbred racing since Garden State Park was rebuilt in Cherry Hill, NJ in 1985.  His first memories of the racetrack include the 1985 Jersey Derby won by Spend a Buck and the 1990 Met Mile clash between Easy Goer, Criminal Type and Housebuster, but it was not until his mid to late twenties that Scott became confident he had a knack for picking winners. He points to the summer of 2007 in San Diego while working on a masters degree in American History as the time where he took his handicapping, his communication skills, and his attention to detail to the next level.  It was at this time where he had his first real big score.   He had four of only five winning combinations in the now extinct  Place Pick All on a $8 ticket netting himself $40,000.