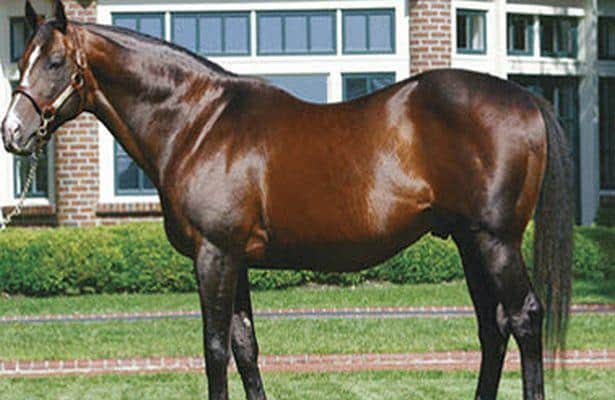 Unfortunately it was the race he did not run in that I will always remember most when it comes to my all-time favorite colt and one of the greatest runners Southern California produced in the 1990’s.  That being said, the Neil Drysdale conditioned son of Seattle Slew, A.P. Indy, was one special runner that we simply did not get to see race enough over his 11-race career.  Despite only racing until the end of his three-year old season, the champion thoroughbred was able to earn nearly three million dollars and will be the focus of the first edition of my series on Southern California’s greatest thoroughbreds.

While his running style was workmanlike, his stardom was expected from day one.  The bay colored 1992 United States Horse of the Year sold as the top-priced yearling of 1990 when he went for a “cool” $2.9 million. This in large part was due to broodmare Weekend Surprise.  The daughter of Secretariat also produced 1990 Preakness Stakes winner Summer Squall, so success was certainly expected from breeders Will Farish III and William S. Kilroy and owner Tomonori Tsurmaki.

A.P. Indy’s racing career started as a two-year old in August of 1991 at Del Mar where he was wide and finished fourth going six furlongs over the main track. It was not until the 1992 Molson Million that he would be defeated again. Along the way came stakes victories in the Hollywood Futurity at two and five more graded wins at the age of three.

The 1992 Santa Anita Derby was one of the most memorable wins for the Drysdale colt and propelled him to the role as morning line second choice in the annual “Run for the Roses” the following month in Louisville. The field for Southern California’s top three-year old “prep race” was compact, but front running Bruce Headley runner Bertrando had the lead until deep stretch despite a brisk early pace.  Regular jockey Eddie Delahoussaye kept A.P. Indy just off the leaders and swung the eventual winner wide before taking control in deep stretch. Soon to be runner up in the Kentucky Derby, Casual Lies tried hard but could finish no better than third.

The victory was supposed to set the stage for a clash with Breeders’ Cup Juvenile champion Arazi who buried Bertrando and others with one of the most stunning two-year old moves you will ever see in November 1991, however a quarter crack kept A.P. Indy out of the Derby and the Preakness Stakes two weeks later.  I remember all too vividly waking up to the news of the scratch that morning in early May. I was devastated. Fortunately, the decision was a sound one as the son of Seattle Slew came back in full force. He scored in the Peter Pan and then in the third leg of the Triple Crown, the Belmont Stakes, where he defeated 18-1 long shot My Memoirs and the accomplished Pine Bluff with a strong late finish.

The star three-year old was given over three months off before being shipped to Canada for the aforementioned Grade II Molson Million where he finished a disappointing fifth at 3-5. A month later he returned to Elmont, New York where he finished third to the more experienced late runners Pleasant Tap and Strike the Gold in the Grade I Jockey Club Gold Cup. From here Drysdale sent A.P. Indy to Gulfstream Park for the Breeders’ Cup Classic where he would tackle 13 others including the two who defeated him 21 days earlier.

The three-year old colt broke well, but took back to sit a few lengths off a hot early pace made by long shots Thunder Rumble and Jolie’s Halo.  Eddie D saved ground and made a powerful move when they turned for home and A.P. Indy did they rest. He won by an impressive two lengths in the end. The biggest win of his career was the last time we saw him race, but he left us with likely his best effort ever.

Whether it was his desire to win or his unique style of dropping his head that made A.P. Indy a fan favorite, it is undeniable that he is one of Southern California’s greatest runners and one I wish we got to see a whole lot more of. Over two decades later he stands as the oldest living winner of the Breeders’ Cup Classic and was as successful as a sire as he was a racehorse.  The foot issues that compromised his career have forced him to wear adhesive front shoes, but overall aging has been kind to A.P. Indy. I am hopeful young fans will get to see many more warriors like him in the twenty-first century.