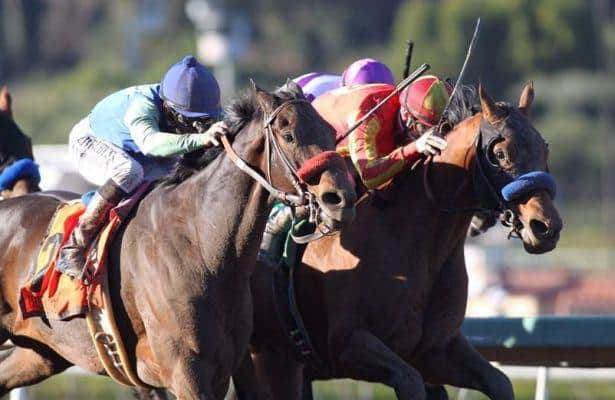 The 2016 Gold Cup at Santa Anita is far from a star-studded rendition of the Grade I, $500,000 event, but the Breeders’ Cup “Win & You’re In” race drew a field of eight probable runners and appears to be another challenging event for Southern California handicappers. A group that is headlined by 2016 Santa Anita Handicap winner Melatonin, third place finisher in the 2016 Dubai World Cup Hoppertunity and last year’s Gold Cup victor Hard Aces will go to the post at approximately 5:45 PM local time. Here is a breakdown of the field in post-position order:

The six-year-old son of Put It Back was a four-time Group I winner in Brazil, but has not been nearly as impressive since arriving in the States in 2015. He is a great story due to his miraculous recovery from laminitis, but appears to be a shadow of his former self at this point.  After five straight underneath finishes on the lawn, Hall of Fame conditioner Richard Mandella will give Bal a Bali a shot on the dirt for the first time on Saturday. The presence of Flavien Prat is a positive, but do not read too much into this in terms of intent. Anything better than a third or fourth place finish would be a big surprise to me.

The Peter Eurton trainee comes in off three straight wins, including a victory in the Grade II Californian last month. The four-year-old son of Summer Bird has been impressive since moving from the lawn to the main track earlier this year and is likely to receive his fair share of support at the pari-mutuel windows. The step up in class is noteworthy, but not as significant as in past years. With a good trip under jockey Mario Gutierrez, he has a very good shot to take down his first Grade I on Saturday.

The Hronis Racing runner won a thrilling rendition of the Gold Cup at Santa Anita last year, but has not done any winning since then. The son of Hard Spun was the benefactor of a hot pace and great ride from Victor Espinoza last June, but is unlikely to get a similar pace scenario this year. Santiago Gonzalez gets his first mount on the John Sadler trainee. An underneath finish appears to be best-case for the winner of 6 races in 31 career starts.

The lightly raced son of Colonel John gave it up late in the Californian as the odds-on favorite and finished a disappointing third to the aforementioned Second Summer. The presence of Martin Garcia for the first time almost ensures this Jerry Hollendorfer runner will once be sent from the gates. If Melatonin and others allow him to get away with easy fractions early, he could be dangerous, but he has not illustrated yet that he is good enough to win at this level.

The four-year-old son of Pulpit has won just three times in ten tries and has never hit the board in a stakes event, but two of those wins have been over this surface. He enters the Gold Cup off of a career best effort last month in a high level optional claiming event at a mile and a sixteenth. He will need to move forward again in his second start of 2016 and illustrate he can get the mile and a quarter distance, but at least he is an improving colt at a likely big price. Hall of Famer Gary Stevens rides for the first time on Saturday.

It did not appear that trainer Bob Baffert was going to run Hoppertunity in this year’s Gold Cup just a short time ago, but he decided late to give it a go with the son of Any Given Saturday. His career earnings of $2.8 million dollars make him the clear class of the field and his strong third in the Dubai World Cup to California Chrome will likely make him the favorite when they go to the post, but I have a few concerns. Firstly, he has struggled to hit the wire first in favorable spots throughout his career, plus this was not the goal of his connections until very recently, which always makes me worry about fitness. I would not be surprised if he wins a lackluster edition of the Gold Cup, but he is worth fading on Saturday at a likely short price.

The five-year-old gelding was the surprising wire-to-wire winner of the Grade I Santa Anita Handicap in March and ran a solid second in April to Effinex in the Grade II Oaklawn Handicap. He has not been seen since the trip to Arkansas, so comes into Saturday’s feature fresh. The presence of Lieutenant Colonel will likely present a different challenge than he faced in the “Big Cap,” as I expect him to sit just off the early pace instead of being on the “engine.”  His perfect record over the surface and solid 2016 form make him one of the likely winners, but not sure his price will be attractive enough for me.

The six-year-old son of Bernardini enters Saturday’s Gold Cup as the 9-2-third choice despite not having hit the wire first since April of 2014. In addition, he is a troubling 0 for 12 at Santa Anita Park. Despite his inability to get to the wire first often, he has earned over $1.9 million dollars in his career and gets the services of jockey Rafael Bejarano for the first time since 2013. The Richard Baltas runner is as honest as they come and should run well in this spot, but is hard to support on top based on history.

This is not one of the better renditions of the Gold Cup and two of the three morning line favorites (Hoppertunity and Imperative) are horses that I am unwilling to endorse in the Win pool.

I think the likeliest winners are Melatonin and Second Summer, so based on probable value I will go with the “new shooter” Second Summer. He is in good form and has shown an affinity to hit the wire first as of late.

I think Melatonin should be there in the end and is a must use in all exotics. If you are looking for value underneath, perhaps Win the Space or Lieutenant Colonel can find their way into the trifecta.