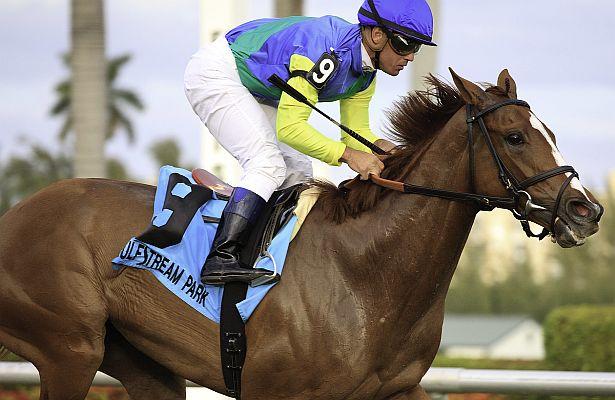 I think there is value to be found in this race given the presence of a vulnerable second choice in Pianist for trainer Chad Brown. This five-year old daughter of More Than Ready returns to the races off of an eight-month layoff and faces a solid group of competitors in Saturday’s De La Rose. The field includes a few horses that appear to have a bit more natural speed than Pianist, who normally does her best running when on a loose early lead which is unlikely to occur in this one.  In addition, the field offers a number of runners that are in the midst of their form cycle where she probably needs a race to round into top shape.

I expect Pianist to be a bit more eager than usual off the “bench” and to potentially get caught up with the other early speed. If she is unable to relax, it would likely compromise her chances as well as potentially hurt the chances of others like long shots Baffle Me and Interesting who hope they can get away with relatively moderate fractions over the first half mile of the non graded stakes race.  On the other hand, if she is able to rate, it is doubtful she can outkick the closers especially given her lack of competition and real foundation thus far in 2014.  I think she is a good play against in this spot where she could end up between 5-2 and 4-1.

The second of the uncoupled Chad Brown entrants is the morning line favorite Dayatthespa. This daughter of City Zip, like Pianist, returns to the races for the first time since her appearance in last December’s Matriarch at Betfair Hollywood Park. This horse flat out takes a ton of money and she has not disappointed for the most part in her 14-race career racking up 8 wins and 3-second place efforts. She is arguably the most talented miler in this group, but like Pianist she might be shooting for bigger things in her next few starts and could be using this as a prep race for the rest of 2014.  Either way she will be an underlay at the venue she is named after and is worth taking a stand against on top, but hard to toss out of vertical wagers.

My strategy in Saturday’s De La Rose Stakes will be to focus on a few horses that can sit a bit off the lead and are in the midst of their form cycle. Joy for Graham Motion and the Dark Hollow Farm is a runner that fits this profile. The daughter of Pure Prize enters the De La Rose off of a solid victory in her return to New York racing on July 4th when she defeated a field of five in the $100,000 Perfect Sting Stakes at Belmont Park. There is little doubt that she is an improving filly for an awesome barn, but will she be close enough early to run them down late?

The smoking hot Todd Pletcher offers two that could also prove tough and be good value in this group with Silsita and Alaura Michele. Silsita won at Saratoga last summer in a game effort over Broken Spell and should sit a perfect ground saving trip if good enough under John Velazquez. The question is whether she is slightly outclassed. Alaura Michele may have the best kick in this group and has 2 wins and a third place effort over the Saratoga lawn.  One of the States top turf riders, Jose Lezcano, gets his first shot on this five-year old daughter of Arch and should be rolling late with the proper trip. Baffle Me may get caught up on the front end, but if Rajiv Maragh can outbreak this group and relax on or near the lead, this daughter of First Samurai is more than capable of running a huge one for solid trainer Mark Hennig. Filmibi should not be overlooked on Saturday despite barely beating a much softer group in May. This Bill Mott runner draws to the outside and has a big shot if able to avoid a wide-trip throughout. The aggressive of Joel Rosario suggests this one could be involved early. I never underestimate Bill Mott in a race like this and she definitely should improve off her last where he was hardly touched in victory.

Of those most likely to pull the upset, Ready Signal fits the profile I am looking for perfectly in this race and her expected value makes her the most intriguing betting option in the De La Rose.  This five-year old daughter of More Than Ready is trained by low profile, but capable conditioner Amy Tarrant and is coming off two races against better. Her latest effort in the Grade I Just A Game Stakes puts her right there at the wire in this group and she should be at least 10-1 given the connections and presence of a few fan favorites at Saratoga.  Shaun Bridgmohan gets the call on her for the first time and she should be finishing well at a big price.

Good luck and if you really like #8 Dayatthespa feel free to substitute him for one of the other longer priced options we have to use with our top play #6 Ready Signal.