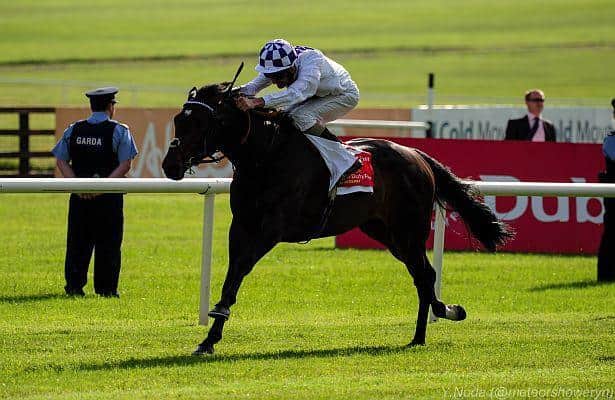 Four weeks after the disappointment of Dawn Approach's bid for Epsom glory, Jim Bolger could celebrate a new assertion on the European middle distance division as Trading Leather powered to victory in the Irish Derby at the Curragh.

Ridden to victory by Bolger's son-in-law and in the colours of his wife, this was a victory that could not have been any sweeter for Bolger. A homebred colt whom had caught the eye last season when gallant in defeat as an previously unraced two year old behind Battle of Morengo, Trading Leather has continued to progress as a three year old. Second in the Group 2 Dante Stakes on his seasonal reappearance and a subsequent third in the Irish 2,000 Guineas, this was Trading Leather's second win of the season but his first at the highest level.

Sent off the respected third favourite, Trading Leather settled behind the frantic early pace before taking the lead towards the final furlongs. Pressed inside the straight by the Epsom Derby third placed finisher Galileo Rock and Aidan O'Brien's Festive Cheer, Trading Leather stuck to the task well ensuring that Jim Bolger would reign supreme and gain his maiden Irish Derby success with a assertive one and three-quarter length victory.

A stable which reaped the rewards of the never say die attitude of Banimpire in 2011, Trading Leather looks to have arrived in a similar mould and continues to progress over a variety of distances. The perfect advertisement for Bolger's continued knack at breeding horses of exceptional potential, there is intrigue as to where Trading Leather may curtail his season amongst the European middle distance division with a what-might-have-been feeling over how he may have fared in the Epsom equivilent.

"It doesn't get better than this," said Bolger. "He would've gone to Epsom if Dawn Approach hadn't been going. I couldn’t run two of them in the race, it's not something I normally do anyway, but it would've been counterproductive as he likes a strong gallop, whereas we weren't sure about the stamina of Dawn Approach."

With Dawn Approach now returning back to a trip at which he excels, all middle distance options now seemingly remain open for Trading Leather. The King George VI & Queen Elizabeth Stakes run at Ascot on 27th July is a regular mid-season target for the stars of the middle-distance division. A race which Bolger has won just once prior in 1992, the King George VI & Queen Elizabeth Stakes is an increasingly open contest this season and looks to be crying out for the entry of a star three year old whom will receive a generous concession of weight from his or her elders.

Aside from the Ascot showpiece, races such as the Juddmonte International and the Irish Champion Stakes seemingly look to be alternative options at this stage whilst an entry at the Breeders Cup looks to have been ruled out for the son of Teofilo.

After victory in the Epsom Derby Aidan O' Brien had told members of the press that it was a possibility that Ruler of the World may skip the Irish equivilent due to the colt's immaturity but the decision was made to enter the son of Galileo alongside Festive Cheer as part of a two-strong Ballydoyle charge with O' Brien bidding for an incredible eight consecutive victories in the race.

However, O'Brien would not rule this renewal of the Derby and, despite the previous doubts over entering Ruler of the World in the Irish showpiece, there could be no cause for complaint as Ruler of the World was comprehensively accounted for in this affair.

Settled towards the rear of the pack off of a scorching front end pace, Ruler of The World struggled to make ground in the straight eventually finishing a well beaten fifth with his stablemate Festive Cheer finishing considerably better in third place.

"I'm not going to make excuses," said O'Brien. "Maybe he has had three quick runs and he was a bit warmer today than Epsom. We'll go back to the drawing board and give him a rest now."

Libertarian and Sugar Boy, both of whom changed ownership in high-value purchases in the lead up to the Irish Derby, failed to land a blow with both finishing well down the field.