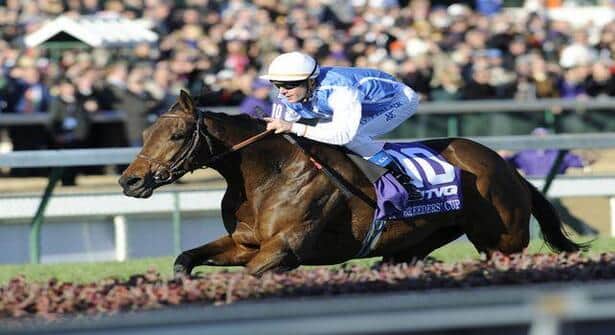 Goldikova and her little sister Galikova headline what is once again shaping up to be the best day of racing in Europe when they will each face the starter in two of the seven group I races that take place on the Prix de l’Arc de Triomphe (Fr-I) program Oct. 2 at Longchamp.

While the fields and jockey assignments for the races won’t be set until Thursday (when the final forfeit and supplemental stage will occur), a clearer picture emerged today as to who would be competing in some of the races.

Goldikova will be one of ten runners that will go to the post in the Qatar Prix de la Foret (Fr-I). The 6-year-old daughter of Anabaa is chasing her 15th group/grade I success in the seven-furlong contest, which her connections hope to use as a springboard toward another successful defense of her TVG Breeders’ Cup Mile (gr. IT) title.

Goldikova has had yet another successful season so far, which has been carefully orchestrated by trainer Freddy Head. The bay mare has made four starts this year, winning the Prix d’Ispahan (Fr-I) and Prix Rothschild (Fr-I), while finishing a close second in the Queen Anne Stakes (Eng-I) and Prix Haras de Fresnay-Le-Buffard Jacques Le Marois (Fr-I).  In the latter two races, she was narrowly defeated by Canford Cliffs (in the Queen Anne) and Immortal Verse (Prix Jacques Le Marois), both high-class, group I-winning horses.

Goldikova faces some tough competition in the Foret, which is led by three-time group I winner, Dream Ahead. The 3-year-old colt by Diktat has developed into a top class sprinter this year, having notched victories in both the Darley July Cup (Eng-I) and the Betfred Sprint Cup (Eng-I). Both those races were contested at six furlongs; the David Simcock trainee has yet to win a race at anything past that distance, however.

Others in the field include Worthadd, a 4-year-old colt by Dubawi who won the Premio Carlo Vittadini (It-II) over eight furlongs in May. Prior to that, the bay colt was second to Canford Cliffs in the JLT Lockinge Stakes (Eng-I). This will be only the second time Worthadd has raced at the seven-furlong distance. In his only previous attempt, he won a conditions race at San Siro in April.

Trainer Jens Hirschberger sends out the hard-knocking Alianthus in the Foret. The 6-year-old son of Hernando is another who is unproven at this distance. The bay horse has been primarily a miler, with 12 of his 16 career starts coming at the eight-furlong distance. Alianthus has won six of those contests; his most recent victory came in the Grafenberger Meile Trophy (Ger-II) in July.

In the race immediately following the Foret, 3-year-old Galikova will attempt to become just the third 3-year-old filly in 30 years (following Zarkava in 2008 and Akiyda in 1982) to win the Qatar Prix de l’Arc de Triomphe (Fr-I), Europe’s most prestigious race.

As of this writing, the full field has not been set for the Arc; Thursday’s final declaration stage will certainly see both some supplemental entries and a few withdrawals.

Galikova, a daughter of Galileo, has been rounding into form this fall, with her most recent start resulting in a 2 ½-length victory in the Qatar Prix Vermeille (Fr-I) Sept. 11. That race marked the first group I victory for the Freddy Head-trained filly, who now boasts a record of five wins from seven starts. Her only poor showing came last year as a juvenile, when she finished fifth in the Total Prix Marcel Boussac (Fr-I) in just her second career start.

Favoritism for the Arc will probably fall between either the Aussie powerhouse, So You Think, or France’s own Sarafina, a three-time group I winner who has lost only once in four starts this season. Bred and owned by the Aga Khan, Sarafina enters the Arc off of a hard-fought victory in the Qatar Prix Foy (Fr-II) three weeks ago. Prior to that, the daughter of Refuse to Bend won the Grand Prix de Saint-Cloud (Fr-I) and the Prix Corrida (Fr-II).

There’s not much more that can be said about the Aussie sensation, So You Think. The two-time Cox Plate (Aus-I) winner has been nearly perfect since being transferred to the yard of Aidan O’Brien. Out of five starts this year, the son of High Chaparral has notched four wins, three of them coming in group I races. There might be some question regarding So You Think’s stamina; the horse has started just twice going further than 10 furlongs. He won the 11-furlong Tattersalls Gold Cup (Ire-I) and was a decent third in the 16-furlong Emirates Melbourne Cup (Aus-I). It should be noted that that race occurred just three days after he won the Mackinnon Stakes (Aus-I).

So You Think may be joined by as many as three fellow Ballydoyle runners on Sunday, although more than likely just one other runner will join him. Additional Coolmore candidates are Treasure Beach, winner of the Dubai Duty Free Irish Derby (Ire-I) and Secretariat Stakes (gr. IT) this season, and St Nicholas Abbey, who captured the Investec Coronation Cup (Eng-I) in June.

Defending Arc champion Workforce will also be in the line up on Sunday. The lightly-raced 4-year-old has made just three starts this season, winning once and finishing second twice. In one of those races, the Coral-Eclipse (Eng-I), he fell a half-length short to So You Think. He will be ridden once again by Ryan Moore, who will be taking his first rides on Friday since recovering from a nasty spill in July.

Someone who just might be overlooked on Sunday is Snow Fairy. The four-time group I winner has yet to find the winner’s enclosure this season, but she came to within a neck of upsetting So You Think in the Red Mills Irish Champion Stakes (Ire-I) Sept. 3. Trainer Ed Dunlop is looking forward to giving his filly another shot at the champion, on the world’s biggest stage.

These are just two of the seven superb races that are on tap for this Sunday at Longchamp. Bonne chance à chacun!