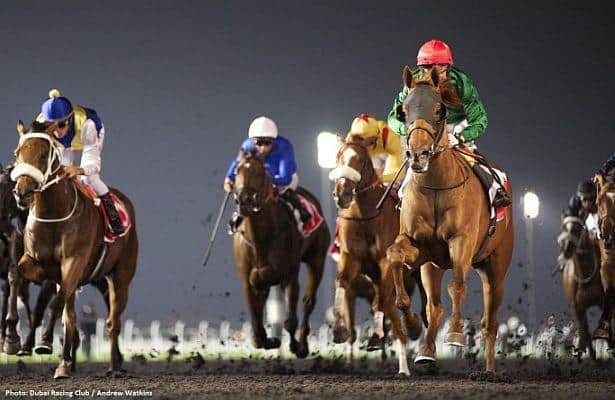 Prince Bishop produced the perfect response to Kieren Fallon’s urgings, as the improving seven year old romped home to victory in Round Three of the Al Maktoum Challenge at Meydan.

Victorious earlier on in the Carnival in Round 2, the partnership of Prince Bishop and Fallon continued to reap monetary rewards on Saturday, with victory on this Super Saturday card providing the duo with their third successive victory when teaming up.

Saeed Bin Suroor and Fallon were in the winning circle earlier on  in the card too, after the progressive Excellent Result provided just that for the Godolphin team, pipping Bin Suroor’s other runner Songcraft on the wire to win the Dubai City of Gold.

However, despite his dominance at this year’s Carnival, Bin Suroor may not have expected the dominant, late rattling performance of Shuruq, who dethroned the highly-fancied South African stalwart Variety Club in the Burj Nahaar.

An impressive winner of Round 1 of the Al Maktoum Challenge on opening week, Shuruq had proved somewhat disappointing on her subsequent outing back on the turf, but a return to the tapeta surface, and indeed back down to the mile distance, saw the four year old daughter of Elusive Quality back to her very best.

Whilst Saeed Bin Suroor’s string were in fine fettle, Mike De Kock was in no mood to exit Super Saturday without a winner, ensuring that his turf star Vercingetorix remained unbeaten with yet another narrow victory in the Jebel Hatta – a traditional trial for the Dubai Duty Free on World Cup night.

Provided with a golden highway as his stable mate Anaerobio edged off of the rail entering the stretch, Vercingetorix stretched his unbeaten record to six in the Group 1 contest and will have his sights firmly set on further glory over course and distance at the end of the month.

2013 Al Quoz Sprinter victor Shea Shea was also in action at Meydan on Saturday, locking horns once more with his old foe Sole Power. However, despite the concerns over how fit and ready Shea Shea would be for this World Cup night trial, the South African bred star was much the best as he dug deep to repel the race-fit Ahtoug in the Meydan Sprint.

As two De Kock runners embedded their superiority over their rivals, Soft Falling Rain struggled to land a blow in the Mahab Al Shimaal, producing a lacklustre effort from a wide draw and eventually fading to finish ninth behind the perfectly primed Hong Kong raider, Rich Tapestry.

Reynaldothewizard produced a stunning effort back in second, whilst Saeed bin Suroor’s string were shown to be in fantastic form yet again as Complicate finished a creditable third.