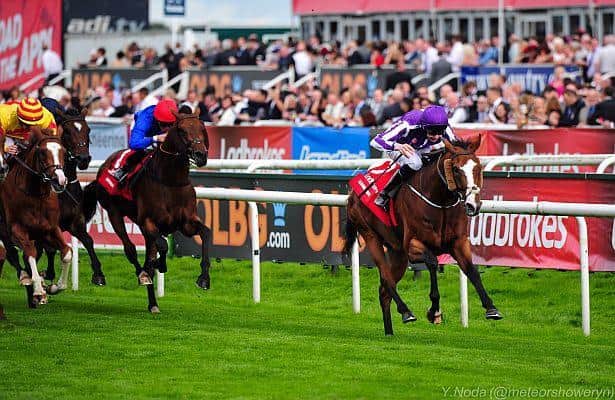 Photo: Yuji Noda
Leading Light produced an authoritative display as he shone brightest to take the English St Leger at Doncaster.
Unseen on a racetrack since a dominant victory in the Queen's Vase at Royal Ascot, Leading Light was making his first appearance in public for three months and was heavily backed into favouritism in the lead up to the race in what had seemed to be an open betting contest.
Settled in second behind the Godolphin pacesetter Cap O Rushes, Leading Light travelled smoothly throughout every furlong of the Doncaster Classic, taking everything perfectly in his stride through a stop-start early gallop.
As the runners angled towards the iconic Doncaster home stretch, Joseph O'Brien confidently guided Leading Light to the lead as his front-end rival began to toil and drop back through the field. Once in front, there was seemingly no stopping the three year old son of Montjeu.
Inside the final two furlongs the presence of Jim Crowley aboard Talent seemed to look boldly as she began to search for the perfect gap to propel through. However, as she angled to begin her run she was stopped in her tracks ensuring that she lost vital momentum at a crucial time and ending Ralph Beckett's search for a second Classic success of the season. However, there can be no doubting that even if Talent had found the gap at the right time she may still have struggled to reel in the runaway victor from the Ballydoyle yard.
A winner over two miles on his last start, Leading Light had dispelled any concerns over race fitness with a unique turn of foot that readily powered him clear of his rivals. Talent continued to stay on well to finish second ahead of Galileo Rock and Libertarian - third and second respectively in the Derby at Epsom behind Ruler of the World.
"I'm delighted, He is such a solid horse and there is plenty of class here," said winning trainer, Aidan O'Brien, whom was winning his fourth St Leger. "They obviously think of lot of him at home but he is versatile. We could drop him back in trip for the Arc but we will have to discuss that back at home."
However, if Leading Light - who is now five-from-six lifetime, is to make the Prix de L'Arc de Triomphe his next start, the connections of Coolmore will be required to supplement the son of Montjeu who does not currently hold an entry in the European middle-distance classic.

Victory in the St Leger followed just twelve months after the defeat of Camelot in the same race. A colt whom held the hopes of British racing upon his saddle when entering the St Leger last season, Camelot was defeated by the Godolphin-owned Encke in a defeat that ended any hopes of Triple Crown domination for the Coolmore team. A ride which earned critical comments from some areas of the sport, O'Brien could not have been criticised in anyway today for his perfectly judged ride upon Leading Light.