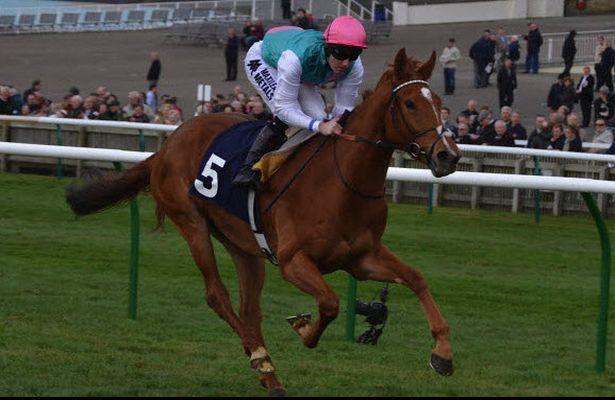 Six months after the fanfare departure of Frankel, Sir Henry Cecil looks to have found a new exciting prospect to enjoy further summer successes with in the shape of three year old filly, Hot Snap, who stormed to victory in the Group 3 Nell Gwyn Stakes at Newmarket.

A filly who had barely been given a mention by the plethora of accredited media on track prior to the race, Hot Snap stormed to a facile success along the stands-side rail, displaying a sublime turn of foot in the process, and readily accounting for Richard Hannon's 11-4 favourite, Sky Lantern.
A once-raced maiden victor prior to the Nell Gwyn, Hot Snap had shown a dislike to the starting stalls on her first start on the polytrack, but it was her reluctance to go with the early pace in her first turf start that looked to be the factor that would contribute to her downfall this time out. Urged along by Tom Queally at the rear of the pack after just half a furlong, the three year old daughter of Pivotal looked to be struggling, weaving left and right behind runners in the early stages as a seemingly sedate early pace was set at the head of affairs.
However, it is the latter stages during which a horse wins a race and builds a reputation. Still at the back of the field with two furlongs to go as the likes of Light Up My Life and Nargys began to set sail for home, Tom Queally continued to nudge along on his filly as the imposing grey figure of Sky Lantern began to loom ominously large along the stands-side rail for Richard Hughes.
As the runners began to near the final furlong, it looked a case of not if, but when Richard Hughes and Sky Lantern would power away for victory. Edging narrowly right to move alongside Paul Hanagan and Reyaadah, Sky Lantern created a gap, a golden highway for Queally and Hot Snap to power from last to first if they were good enough. Queally needed no greater invitation.
As the gap opened, Queally nudged Hot Snap along the rail, powering towards the head of the pack with an exciting turn of foot and instantaneously ranging alongside the Breeders Cup Juvenile Fillies Turf eighth, Sky Lantern. Hughes attempted to respond, vigorously nudging away and urging his filly to respond, yet the further they went inside the final furlong, the further Hot Snap began to edge away.
With Frankel exiting stage right, the timely arrival of Hot Snap could not have come at a more perfect moment. A half-sister to Breeders Cup Filly & Mare heroine, Midday, Hot Snap is a filly who looks to be a perfect heir to Midday's throne as the Queen of Warren Place. A filly who, seemingly, will thrive on the step up in trip and class into the races, such as the Nassau Stakes at Glorious Goodwood, which Midday made her own during her tenure.
A trainer at the peak of popularity within British racing, Sir Henry Cecil has returned to the winner's enclosure a renewed vision of health this season. A trainer that had built a legacy with a perfection of training fillies and mares prior to the arrival of Frankel, Cecil oozed charisma as he quipped and joked with members of the press.
"She's a baby and will be much better in three weeks time", said Cecil, "She's coming to herself but she's not there yet and she wants a mile plus. I expect her to come on quite a lot for this. She may be a [1,000] Guineas filly, otherwise she'll be a very nice filly for the Coronation Stakes at Royal Ascot.".
Having observed the English 1,000 Guineas favourite, Charlie Hills' Just The Judge, work on the Rowley Mile prior to racing, Hot Snap joined Charlie Hills' filly at the top of the betting markets for the race after her facile victory, installed as the 5-1 joint favourite to provide Cecil with his seventh success in the race.

Hot Snap was also quoted at 8-1 for the Epsom Oaks, an unlikely target which would provide Cecil with a remarkable ninth Oaks winner.