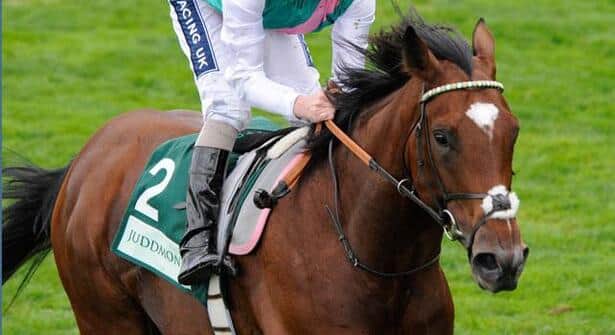 Undefeated superstar Frankel capped off his tremendous 3-year-old season when he was named 2011 Horse of the Year at the Cartier Racing Awards ceremony in London. The Juddmonte Farm-homebred also took home champion 3-year-old colt honors as well.

The Cartier Awards capped a memorable day for Frankel’s trainer, Sir Henry Cecil, who had been knighted by the Queen earlier in the day.

The dual championship for Frankel (Galileo-Kind, by Danehill) is well-deserved and probably comes as no surprise to anyone. The colt started out the year with a victory in the Greenham Stakes (Eng-III), then promptly bulldozed his way through four straight group I victories—QIPCO Two Thousand Guineas, St. James’s Palace Stakes, QIPCO Sussex Stakes, and the Queen Elizabeth II Stakes. He defeated such standouts as Dream Ahead, Canford Cliffs, Excelebration, Dick Turpin, and Immortal Verse.

I am very much looking forward to Frankel’s campaign in 2012, since Sir Henry has stated that his star pupil will be stretched out to 10 furlongs, and will possibly be aimed for such races as the Juddmonte International (Eng-I) and the Champion Stakes (Eng-I). It wouldn’t surprise me at all if he made his first 10-furlong attempt in the Prince of Wales’s Stakes (Eng-I) at Royal Ascot in June.

I have to admit being a bit surprised that Cirrus Des Aigles was named champion older horse. The 5-year-old gelding by Even Top made 10 starts in 2011, winning half and finishing in the money in the other five. Yes, that’s a great record, and ‘Cirrus’ is a top-class competitor. However, the gelding only notched one group I victory this year, when he held off So You Think by three-quarters of a length to take the QIPCO Champion Stakes (Eng-I) in October.

The Cartier Awards are determined by points earned by horses in Pattern (group/graded) races throughout the year. Those are combined by the opinions of racing journalists and votes from readers of the Racing Post and Daily Telegraph. (On a side note---Wow! Fans having a say in year-end awards voting! How unique!!)

Now, had I had a vote, So You Think would have definitely been my champion older horse. The 5-year-old horse won four of his eight starts, with three group I victories to his credit. He wrapped up his season with a decent sixth-place finish in the Breeders’ Cup Classic (gr. I), which was his first start on dirt (which hadn’t dried totally from earlier rains, so it was more like peanut butter). He was only beaten 3 1/2 lengths.

Qatar Prix de l’Arc de Triomphe (Fr-I) winner Danedream was honored as top 3-year-old filly. The daughter of Lomitas has won four of her seven starts so far this season, with three of the wins coming in three group I’s in open company. In the days preceding her Arc victory, a share was purchased by Teruya Yoshida; as a result, Danedream will be contesting the Japan Cup (Jpn-I) next weekend. Original plans had been for the filly to be shipped to Kentucky to contest either the Emirates Airline Breeders’ Cup Filly & Mare Turf (gr. IT) or the ‘regular’ Turf (gr. IT).

Dream Ahead was named the Cartier champion sprinter. The 3-year-old son of Diktat sold for just $11,000 at the 2009 Keeneland September yearling sale, and went on to win four group I races; the Shadwell Middle Park Stakes (Eng-I) as a juvenile, and the Darley July Cup (Eng-I) and Betfred Sprint Cup (Eng-I) before nipping Goldikova in the Qatar Prix de la Foret (Fr-I) in October.

Trainer Aidan O’Brien (who I think should seriously be considered for an Eclipse Award this year) did have two trainees win awards—Fame And Glory, who was named champion stayer, and Maybe, his undefeated 2-year-old filly star.

Last but not least, champion 2-year-old colt went to the undefeated Dabirsim, a son of first-crop sire Hat Trick. Dabirsim won all five of his starts, and wrapped up his year with victories in the Darley Prix Morny (Fr-I) and the Qatar Prix Jean-Luc Lagardere (Fr-I).