Searching for a Few Bucks Across the Pond 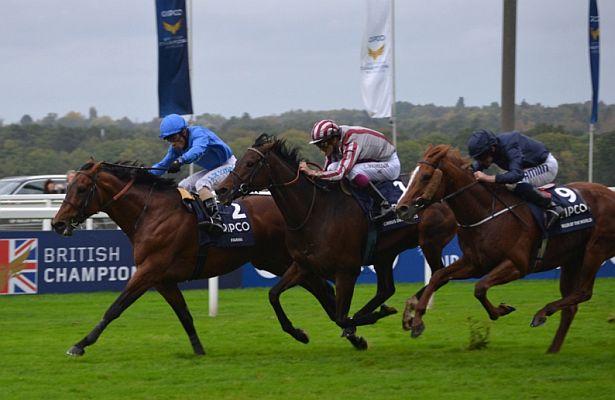 Two weeks ago, many of the best horses in Europe gathered in Paris, France for Prix De L' Arc De Triomphe day. For decades, that was the final major racing day on the European calendar. That all changed a few years ago with the creation of the Qipco British Champions day at Royal Ascot. Although the number of races are not as great, and the purse money is not as substantial, it offers many European horses one final chance at a Group 1 or Group 2 score on their home soil before the winter break.

This year, there are six races on the card, five of which are Group 1 or 2. Following is a brief look at each race along with the wagering strategy I plan to use.

At two miles the British Champions Long Distance Cup is the longest of the five British Champions races.  The race is led by Leading Light, a multiple Group 1 winner from the Aiden O'Brien barn.  He is the most likely winner of the race and he will likely be the heaviest favorite on the card.  Second in the betting will likely be Estimate, who is owned by the Queen and trained by Sir Michael Stoute.  She is a Group 1 winner and was beaten only a neck by Leading Light in the Ascot Gold Cup in June.

While those two will take most of the money and will be very tough to beat I'm going to try to do so with the lightly raced Flying Officer.  He has run poorly only once, albeit in his only race against Group company, but he returned this year with a win in a Listed Stakes and most recently with a solid second in a Listed Stakes.  In that race he earned the top rating of his career and if he can take another step forward he has a chance to upset this field.

Wagering Strategy: I'll bet Flying Officer to win at odds of 10/1 or higher and I'll key him over Leading Light, Whiplash Willie and Estimate in the exacta and trifecta.

At six furlongs the British Champions Sprint Stakes is the shortest of the five British Champions races.  This race also boasts the largest field (17).  Three horses are likely to vie for favoritism: Gordon Lord Byron, Gregorian and G Force.  Those three have all run competitively in Group 1 and 2 races and G Force most recently won the Group 1 Betfred Sprint Cup.

It is very likely the winner of this race will come from that trio but with such a large field and each of the three not showing a propensity to win every time I'm taking a small shot with long shot Lucky Kristale.  She enters the race with three consecutive poor efforts but all three were at longer distances.  The past performances only show her four most recent races but a quick check of her lifetime record on the Racing Post website shows a filly that is 4/5 at six furlongs with a Group 2 win to her name.  She may be off form or maybe the cut back to six furlongs will suit her.  Either way she is worth a few bucks at what will likely be a huge price.

Wagering Strategy: I'll bet Lucky Kristale to win at odds of 20/1 or higher and will key her over Gordon Lord Byron, Gregorian and G Force in the exacta and trifecta.

The lone race restricted to fillies is the British Champions Fillies and Mares Stakes run over 12 furlongs (1 1/2 miles).  This race contains my best bet of the day.  Hadaatha was my choice in the Prix De L' Opera on Arc day and she run extremely well to be beaten only a half length.  She is lightly raced and it would take a monumental reversal of form for her to lose here as she faces a much weaker field.

Wagering Strategy: I'll bet Hadaatha to win at odds of 3/1 or higher and will key her over Chicquita, Cubanita, Silk Sari and Tasaday in the exacta and trifecta.

The fourth stakes of the day is the Queen Elizabeth II Stakes at one mile and looks very evenly matched.  The top three betting choices will likely be Charm Spirit, Integral and Night of Thunder.  Each has a Group 1 win at the distance on their resume with the first two being multiple Group 1 winners.  Of the three I prefer Integral, who has shown the versatility of winning both on and off the pace.

Of the rest of the field I prefer Custom Cut and Kingsbarns.  The former enters this race on a five race winning streak, including two Group 3 and one Group 2 wins.  The latter has been hit or miss in his career but ran third in this race last year, won a Group 1 at two at one mile and seems best suited for this distance.

Wagering Strategy: I'll bet Integral to win at odds of 7/2 or higher and will key her over Custom Cut, Kingsbarns, Charm Spirit and Night of Thunder in the exacta and trifecta.

The big race on the card with the largest purse and the most recognizable horse is the Champion Stakes, which will be run at 10 furlongs (1 1/4 miles).The headliner is the eight year old Cirrus Des Aigles. He is a multiple Group 1 winner and has run second in this race each of the last two years. At 7/5 he has the lowest morning line odds of any runner on the card.

Second on the morning line is my top choice, the lightly raced Free Eagle. He has run only three times, with two wins and a second to triple Group 1 winner Australia. He most recently won easily in a Group 3 off a one year layoff and looks set for a top effort. There is a good chance he will go off at higher odds than his morning line because of the aforementioned Cirrus Des Aigles and Noble Mission. The latter is the full brother to the legendary Frankel and while he is not quite in the same class as his older brother he will always take a lot of money.

Wagering Strategy: I'll bet Free Eagle to win at odds of 5/2 or higher and will key him over Cirrus Des Aigles and Noble Mission in the exacta.

The final race on the card is a handicap at one mile with a field of 28.  It will be fun race to watch but not one I plan on getting involved in.  You can catch all of these races on TVG with the race race scheduled to go ff at 8:45 a.m. ET and you can also get free past performances from TVG as well. I also recommend you check the Racing Post website as it has additional information that is worth viewing. You can also find many of the replays of the top contenders races on YouTube and on the Qipco British Champions Series website.

Lenny Moon is the founder of Equinometry.com where he shares his thoughts on handicapping and betting horses and handicapping contests and WagerLogged.com a site designed to take the hassle out of one of the most important parts of being a profitable horseplayer: record keeping. You can also occasionally find him in the grandstand of Laurel Park and more often in a handicapping contest on Derby Wars.  He can also be found on Twitter @Equinometry.