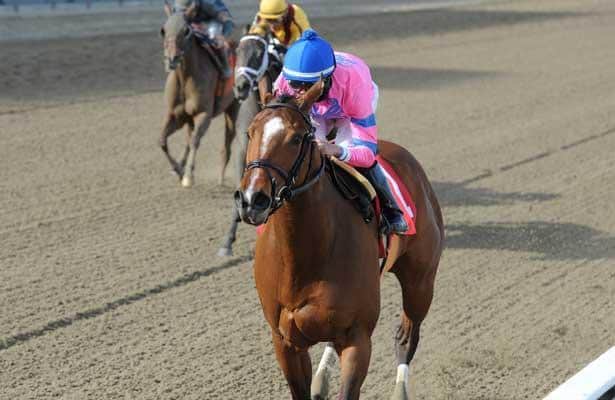 There is nothing more frustrating for a horseplayer than handicapping a race and having to deal with one or more late scratches.  Depending on the horse you might have to handicap the race all over again, alter your selections or not bet the race at all.  This seems to be happening more often recently and for me it occurred over the weekend in the only race I planned to bet.

Saturday was the "Fall Festival of Racing" at Laurel Park, an event I would normally attend since its my home track.  This year I had to skip the event because we were having my older son's birthday party.  Since I couldn't attend and wouldn't be able to watch the races live I only handicapped the main event, the DeFrancis Dash.  I landed on La Verdad as I thought she was the speed of the speed.  Much to my dismay she was one of two late scratches in the field of ten.  I ended up not betting the race because it was too late to re-handicap the race prior to departing for the birthday party.

The other scratch was not a surprise because King Leatherbury said after entries were taken that Ben's Cat would probably be scratched.  The reason was because the field was too tough.  He knew who was being considered for the race and he knew he wasn't going to run against those horses so why then did he enter Ben's Cat?  This situation happens quite regularly in American racing, especially in stakes races.

Why Do Horses Scratch?

There are many reasons for scratching and most are perfectly legitimate.  If a horse suffers an injury or gets sick prior to a race they should be scratched.  If inclement weather rolls in and wipes races off the turf and makes the main track muddy or sloppy scratches are completely warranted.  If a horse draws the far outside post in a race that has a short run to the first turn a scratch is justifiable.

Basically if the horse is at a disadvantage and doesn't have a fair chance of winning the horse can and should be scratched.  The question is how often is this the case?  Look at the changes on any given day and you'll find an abundance of scratches for various reasons.  Let's look at Parx today for an example of what has become all too common in American racing.

To summarize the 9 race card had 68 entries for an average field size of 7.6.  That in and of itself is not very appealing from a wagering perspective.  After removing the 15 scratched horses we are left with 53 runners for an average field size of 5.9.  Combine that with the exorbitantly high takeout rates at Parx and one has to wonder why anyone is betting these races.

Let's assume you had planned to bet the races or maybe you were playing in a Derby Wars handicapping contest.  Either way you handicapped the full card last night, came up with your selections and planned your bets and/or which horse to play in the contest.  A few hours before the first post you check and see scratches aren't in (another problem).  Finally at 10:42 a.m. the first scratches are reported leaving you less than two hours to make adjustments in 7 of the 9 races.  You finish your reassessment and find that two additional horses have scratched in race 4 and now you have to re-handicap that race.

What Affect Do Late Scratches Have?

There is no doubt that late scratches negatively impact wagering handle.  Fewer horses equals fewer dollars wagered.  Additionally when your horse scratches you will be less inclined to bet the race or you will likely bet far less than originally planned.  As I mentioned I didn't bet the DeFrancis Dash because my key horse was a late scratch.

Late scratches also cause mass frustration amongst horseplayers even when the horse scratched is not your horse.  Suppose a race has two need the lead front runners and you logically land on a pace presser or closer.  An hour before the first post you see that one of the two front runners is scratched.  Now what do you do? Do you re-handicap the race?  Stick with your original selection even though the horse has lost its advantage?  Add the lone front runner to your wagers, which could double the costs of your wagers?

Why are Scratches So Common in America but Not Elsewhere?

If you tune into late night racing from Hong Kong or Japan you'll notice two things.  First they tend to have fairly large fields and second there are typically very few scratches.  The same can be said of Dubai races and many European races.  So why do American races have a higher scratch rate?

The most likely reason is because we race seven days a week with most tracks running four or five days a week.  There are ample opportunities to race for all level of horses in America.  Most foreign race tracks only race once or twice per week.  Fewer opportunities results in larger fields and fewer scratches.

The logical solution to reduce the number of scratches is to reduce the number of races but that isn't likely to happen any time soon.  Owners and trainers like more races because they reduce field size and increase the probability of earning part of the purse.  Another solution would be to penalize owners and trainers for scratching.  This is also unlikely because it would be hard to determine the appropriate penalty for the reason a horse was scratched.  Would you receive the same penalty for scratching because of an off track as you would because of a paperwork issue? Would every reason deserve a penalty?  This solution is too complicated.

Perhaps the best solution is not to focus on the scratches themselves but to simply report them sooner?  Some tracks post scratches four or five hours before their first post while others wait until as late as thirty minutes before first post.  The former is acceptable while the latter is not.  I don't see why all tracks can't publish scratches four or five hours before the first post.  Of course there will be the occasional very late scratch but that should be the exception not the rule.

What do you think about this?  Are you as frustrated as I am about the vast number of scratches in American racing and if so what would you like to see happen to ease your frustration?

Lenny Moon is the founder of Equinometry.com where he shares his thoughts on handicapping and betting horses and handicapping contests and WagerLogged.com a site designed to take the hassle out of one of the most important parts of being a profitable horseplayer: record keeping. You can also occasionally find him in the grandstand of Laurel Park and more often in a handicapping contest on Derby Wars.  He can also be found on Twitter @Equinometry.