3 thoughts as we turn the page to Breeders' Cup Saturday 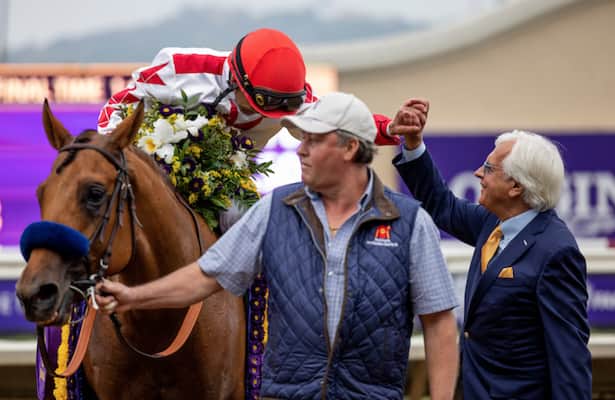 There was no real home-court advantage

The top two betting choices in race two, Ready to Purrform and Degree of Risk, both had never raced in California, and they finished seventh and third, respectively. Astronomer, who at 30-1 was the longest shot on the board, got up to win by a half-length. Astronomer had two prior races at Del Mar, and the runner-up in the race, Optimising, who was sent off at 8-1, also had experience at Del Mar.

The fourth race saw improvement with the East Coast-based Time Limit’s runner-up finish at 8-1. Though the favorite, Superstition, showed a last-out race at Kentucky Downs, she previously had run exclusively at Del Mar and Santa Anita. She finished seventh. The other East Coast shippers did not fare well and ran to their odds. Lagertha (20-1) finished sixth, and Ambassador Luna (19-1) finished second to last.

Moving to the Breeders' Cup races, the home team excelled in one race, the Breeders' Cup Juvenile. Corniche and Pappacap ran 1-2 in last month’s American Pharoah at Santa Anita, and Friday they again completed the exacta. The highly regarded East Coast-based Commandperformance finished a disappointing fourth.

In the only other Breeders’ Cup Dirt race for the day, Echo Zulu’s dominating Breeders’ Cup Juvenile Fillies win, only one home horse was entered: Desert Dawn at 42-1 finished last.

In the three Breeders’ Cup, grass races nothing stood out, with minimal local representation.

Euros are off to a flying start

The Breeders’ Cup Juvenile Fillies Turf was a wide open affair, pari-mutuelly speaking, with the favorite Koala Princess off at nearly 5-1. The French filly Malavaath (17-1), narrowly missed in this event when runner-up to Pizza Bianca. Two other overseas entrants, Cachet (20-1) and Hello You (14-1) also outran their odds when finishing fourth and fifth, respectively.

The controversial finale saw the favorite, Modern Games, win decisively. Modern Games had raced exclusively in Great Britain prior to Friday. Though he was pulled from the wagering pools, Modern Games was favored prior to the mishap at the starting gate that resulted in his stablemate, Albahr, being scratched.

Baffert-trained horses are ready to run.

This is a fair question to consider, given the circumstances that trainer Bob Baffert is in. First, let's be clear on how the Breeders’ Cup is handling Baffert-trained Breeders’ Cup runners.

As a condition of being allowed to run his horses in the Breeders’ Cup, Bob Baffert has agreed to unprecedented screening, observation and testing, including security officers with body cams and abandoning usual withdrawal times for legal medications.

In addition, investigators will be assigned exclusively to Baffert’s barn and will will monitor it on a 24-hour basis and be allowed to confiscate medications and ointments and review daily treatment and billing records.

On Breeders’ Cup day one, Baffert-trained horses ran well. He had horses in only two races, but he won them both. In the opener on Friday, Baffert horses completed the exacta. Triple Tap won as the favorite and runner-up Sumo went off as the second choice.

In the Breeders’ Cup Juvenile, the Baffert-trained Corniche impressed in his win as the favorite. The two other Baffert entrants, Pinehurst (6-1) and the maiden winner, Barossa (19-1), were both off the board.

On Saturday Baffert again will have five horses running, this time in four Breeders’ Cup races. Gamine will be the prohibitive favorite in the Filly & Mare Sprint, and the other four horses will not be favored though they have very real chances to win. The remaining four are Eight Rings in the Dirt Mile, Private Mission and As Time Goes By in the Distaff, and Medina Spirit in the Classic.

Dismiss the Baffert horses at your own peril, but a win in more than one Breeders’ Cup race Saturday by a Baffert-trained horse would not surprise me in the least.